2.1 Introduction
In mathematics, a polynomial is a finite length expression constructed from variables (also known as indeterminates) and constants, using the operations of addition, subtraction, multiplication, and constant non-negative whole number exponents. For example, – 4x + 7 is a polynomial, but is not, because its second term involves division by the variable x and also because its third term contains an exponent that is not a whole number.
Polynomials are one of the most important concepts in algebra and throughout mathematics and science. They are used to form polynomial equations, which encode a wide range of problems, from elementary word problems to complicated problems in the sciences; they are used to define polynomial functions, which appear in settings ranging from basic chemistry and physics to economics, and are used in calculus and numerical analysis to approximate other functions. Polynomials are used to construct polynomial rings, one of the most powerful concepts in algebra and algebraic geometry. Before we go into the detail study, let us recap few basic terms that we learnt in our earlier classes.
2.2 Basic terms
i) Variable: A symbol which takes various values is known as a variable or literal. Any letter can be used to denote a variable.
Example: x, y, z, etc.
ii) Constant: A symbol having a fixed numerical value is called a constant.
Example: 3, 25,8, etc.
iii) Coefficient: In the product of a variable and a constant, each is called the coefficient of the other.
Example: 3x. Here 3 is the coefficient of x and also x is called the coefficient of 3.
iv) Term: Numbers and literals are multiplied to form a product which is known as the term. Also, a constant or a variable is also known as a term.
Example: 3x, 4, y, 5y, etc.
v) Algebraic Expression
A combination of constants and variables by the four basic mathematical operations (+, –, ×, ) is called an Expression or an Algebraic Expression.
Example:
3 + 4x – 3 , , 4+ 3x + 5
Note: The powers of variables of an algebraic expression can take any real number.
Example: In the expression , x is the variable, 3, 4 are coefficients, –3 is the constant and the total number of terms in the expression are 3.
2.3 Polynomial
An expression of the form
p(x) =
where powers o f variable are non–negative integers, and coefficients are any real numbers . is called a polynomial in x of degree over real numbers.
Example: etc.
General form of a polynomial
Polynomials with their standard or general forms and their respective degrees are given in the table below :

II. Classification based on coefficients

III. Classification based on degree

III. Multiplication of Polynomials
The following are some points to be noted for multiplying polynomials.
i) The general rule is that each term in the first factor has to multiply each term in the other factor.
ii) The number of products you get has to be the number of terms in the first factor times the number of terms in the second factor.
For example, a binomial times a binomial gives four products, while a binomial times a trinomial gives six products.
iii) Be very careful and methodical to avoid missing any terms.
iv) After the multiplication is complete, you can try to collect like terms and write side by side and simplify the result.
Multiplication of polynomials can be done in two ways: Here p(x) is called the multiplication and q(x) the multiplier.
1. Horizontal Method:
Step – 1: Multiply each term p(x) with that of q(x).
p(x) = x + 3
q(x) = x – 2 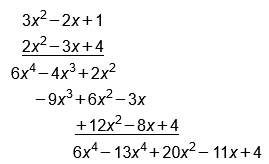 Note : If any terms are missing in the dividend or divisor, leave spaces and treat them as terms with coefficient zero.
2. Synthetic division method
As this is short and simple it is called synthetic division.
This is also called Horner’s method.
Let us understand the method by considering the following example.
Divide

Step 5: The last element of Row–3 is the required remainder. Remainder = 4
Step 6: The number in Row–3 (except the last) represents the coefficients of the quotient, which is one degree less than the dividend. 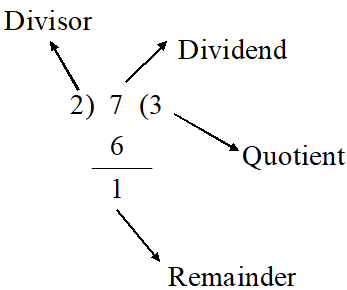 = 162 – 459 + 441 – 156 + 12 = 0
Therefore, (x – 3) is a factor.
Hence, (x – 2)(x – 3) = is a factor of the given expression.
Some interesting observations:
i) The degree of the remainder is always less than the degree of the divisor.
ii) If the degree of the divisor is greater than the degree of the dividend, then the quotient is zero.
iii) For an expression f(x), If f(0) = 0, then x is a factor of f(x).
iv) For an expression f(x), If f(a) = f(b) = 0, then x – a and x – b are factors of f(x).
2.10 Algebraic Identities
Expressing a given polynomial as a product of two or more factors is called factorisation.
Polynomials can be factorized using the following methods.
I. Method of using Identities
II. Method of Splitting the middle term
III. Method of Completion of squares
IV. Method of Grouping of terms
I. Method of using identities:
In this method, we factorise the polynomials using different identities. Before we see the method of factorisation, let’s recap the identities that we learnt in our earlier classes.
1.
2.
3.
4.
5.
6.

i) Factorisation using
Example: Factorise .
can be written as

Example: Factorise  .
can be written as

iii) Factorisation using
Example: Factorise  can be rewritten as which is of the form .


Example: Factorise .
can be rewritten as
which is of the form .

iv) Factorisation using .
Example: Factorise .
Clearly, is of the form


IV. Grouping of terms
Expressions which can be put in the form can be factorised by grouping of terms.
For example, can be factorised as follows:
The expression can be rewritten as,
+ c (a + b) = (a + b)(a – b) + c(a + b)
= (a + b) (a – b + c)
An expression may be resolved into factors if the terms can be arranged in groups which have a compound factor common.
2.11 HCF and LCM of Polynomials
I. HCF of Polynomials
A polynomial d(x) is said to be a divisor of a polynomial p(x), if d(x) is a factor of p(x) ie., p(x) can be written as p(x) = d(x) . q(x), where q(x) is a polynomial.
Therefore, HCF of two polynomials p(x) and q(x) is that common factor which has the highest degree among all common factors and which has the highest degree term coefficient as positive.
Let us find the HCF of the polynomials 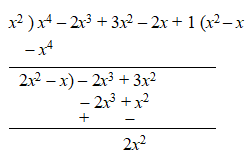 Continue the division and bring the next two terms (–2x + 1) in the expression as the dividend for the next step. 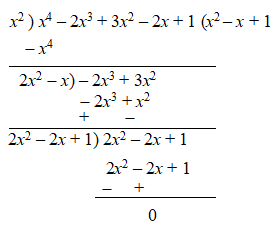 II. Symmetric Expressions
An expression f(x, y) is said to be symmetric, if f(x, y) = f(y, x) i.e., the expression does not change, when variables are interchanged.
Example:
After interchanging variables,


which is same as f(x, y, z). Such expressions are called cyclic expressions.
Note:For any expression to be cyclic, it should have a minimum of three variables.