12.1. INTRODUCTION
In this chapter, we shall review some elementary constructions which we have already learnt in previous chapters. We will also construct some new accurate figures which are needed in the construction of different things.
For these constructions, we shall apply some already proved geometrical theorems. Following geometrical instruments are required for the construction of accurate figures :
(i) a graduated scale
(ii) a pair of set squares
(iii) a pair of divider
(iv) a pair of compass
(v) a protractor
12.2. BASIC CONSTRUCTIONS
Construction 1
To construct the bisector of a given angle
A line which bisects a given angle is known as angle bisector of that angle. Let a given angle ABC. We want to construct its bisector.
Steps of Construction
(i) Take B as a centre and with any radius, we draw an arc intersecting arms BA and BC at P and Q respectively.
(ii) With P and Q as centres and with the radius more than , we draw arcs, intersecting each other at point R.
(iii) We draw ray BR. Then ray BR is required angle bisector of ABC. 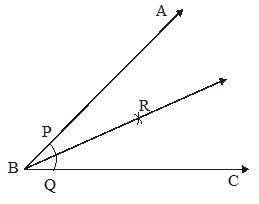 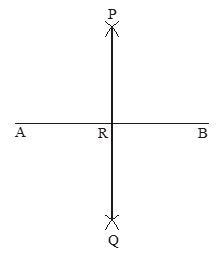 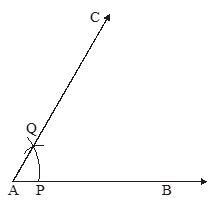 Step of Construction :
(i) For given ray AB, with centre A and with any convenient radius we draw an arc intersecting AB at point P.
(ii) Now with centre P and with the same radius as in step (i) we draw an arc intersecting the previous arc at point Q.
(iii) We join AQ and produce it to form ray AC. Then we have .
12.3. Some Constructions of Triangles
Construction 4
To construct a triangle with given base, a base angle and sum of other two sides.
Example 1
Draw a triangle in which QR = 4.1 cm, and PQ + PR = 7 cm
Solution 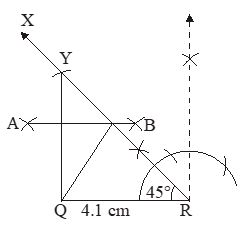 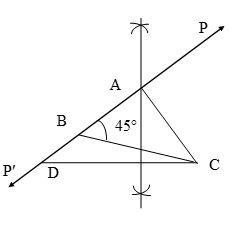 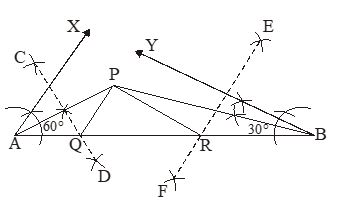 (i) We draw a line segment AB = 10.5 cm.
(ii) We draw  and .
(iii) We draw angle bisectors of  intersecting at point P.
(iv) We draw perpendicular bisectors CD at AP and EF of BP intersecting AB at point Q and R respectively.
(v) We join PQ and PR.
(vi)  is the required triangle.