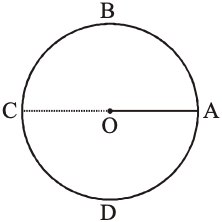 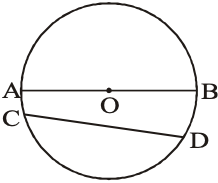 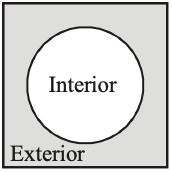 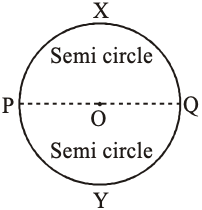 If P and Q are ends of a diameter then both arcs are equal and each is called a semi circle, i.e.,  and  are equal arcs having a semi-circle in figure. It is also called semicircular region.
Circumference
The length of the complete circle is called the circumference of the circle. It is denoted by C in figure, 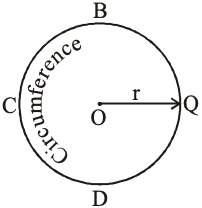 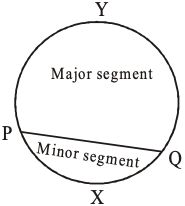 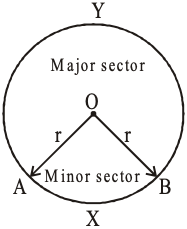 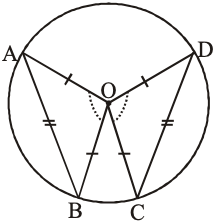 Given : In figure, chord AB = chord CD of a circle with centre O.
Construction :  joined OA, OB, OC and OD respectively.
To prove :
Proof : In , we have,
OA = OC [Radii of a circle]
OB = OD [Radii of a circle]
and AB = CD [Given]
[By SSS congruence rule]
Hence, [By CPCT]
Example 2
Prove that the line drawn through the centre of a circle to bisect a chord is perpendicular to the chord. 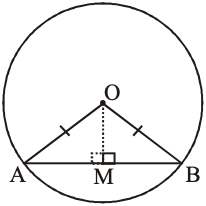 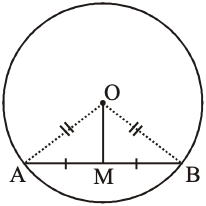 [from (i) and (ii)]
Hence, OM AB.
Example 3
There is one and only one circle passing through three non-collinear points. 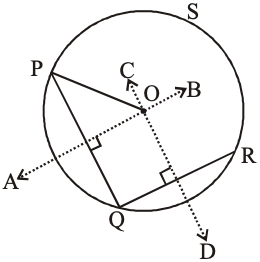 Proof : Let P, Q and R be three non-collinear points. If we join PQ and QR perpendicular bisectors of  PQ and QR intersect each other at O
Now, join OP and it is the radius of the circle, which makes the circle PQRSP and also passes through these three non-collinear points P, Q and R.
Hence, we can say that one and only one circle can be drawn through three non-collinear points.
11.3. ANGLE SUBTEND BY AN ARC
The length of the perpendicular from a point to a line is the distance of the line from the point.
Let AB be a line and P be a point. We know that there are infinite numbers of points on a line. If we join these points to P, we will get infinitely many line segments, PL1, PL2, PL3, PL4, …….. etc. in figure.

Out of these line segments, the perpendicular from P to AB i.e. PM will be the least. Hence, this least length PM has to be the distance of AB from P.
Example 3
Prove that equal chords of a circle are equidistant from the centre. 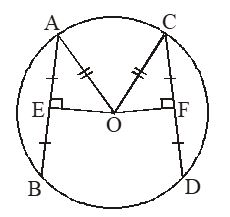 Given: AB and CD are two equal chords of a circle with centre O and OE AB and OF CD in figure.
To prove: OE = OF
Construction : Joined OA and OC
Proof : The perpendicular from the centre of a circle to a chord bisects the chord.
Now,  OE AB,
…(i)
and   … (ii)
But AB = CD [Given]   … (iii)
[From (i), (ii) and (iii)]
In OAE and OCF, we have
OA = OC  [Radii of a circle]
AE = CF  [By proof]
and   [Given]
[By RHS congruence rule]
Hence, OE = OF  [By CPCT]
Example 4
To prove that the angle subtended by an arc at the centre is double the angle subtended by it at any point on the remaining part of the circle.
Given : An arc BC of a circle subtending angles BOC at the centre O and BAC at a point A on the remaining part of the circle in figure.(i), (ii) and (iii).

For case (iii) in figure. (iii), where BC is the major arc, (v) is replaced by reflex angle

11.4. CYCLIC QUADRILATERAL
A quadrilateral ABCD is called a cyclic quadrilateral if all the four vertices A, B, C and D are cyclic.
Example 6
AB = CB and O is the centre of the circle. Prove that BO bisects 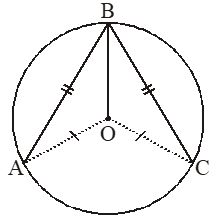 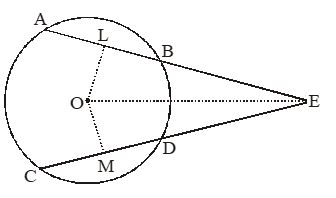