In many real life situations, we have data in an unorganized form, which is called raw data.
To draw meaningful inference, we organize the data into systematic pattern in the form of frequency distribution table. Frequency can be represented in another way by putting bars as shown in the following table. 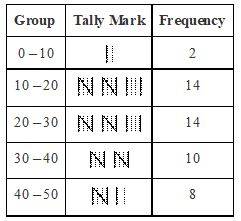 These bars are known as tally marks. The number of tallies for each group gives the number of students whose marks lie in that particular group. Suppose there are 5 students lying in a particular class interval. Therefore, it would be represented by

where four students are represented by four vertical bars as || and the 5th student is represented by a bar which cuts these four lines diagonally as .
Let us now go through an example to understand this concept better.
Example
Observe the given frequency distribution table and then answer the following questions. 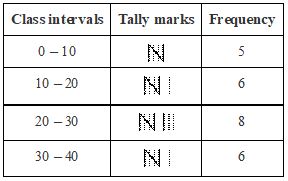 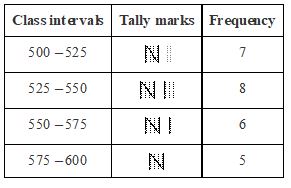 5.3. CONSTRUCTION OF HISTOGRAMS
The frequency distribution table of the marks of 26 students in a particular subject is as follows.

Now, let us know how to draw the histogram.
We will represent the class intervals, i.e. the marks of students on the horizontal axis and the frequency, i.e. the number of students in a particular class-interval on the vertical axis.
The histograms are similar to bar graphs but the only difference is that there is no gap between the bars. This is because there is no gap between the class intervals and the data is continuous.
In the interval 0 – 10, the frequency is 4. Therefore, the height of the bar will be 4 along the vertical axis.
Similarly, the bars corresponding to the other frequencies are drawn.
The histogram for the given data is shown below (a). 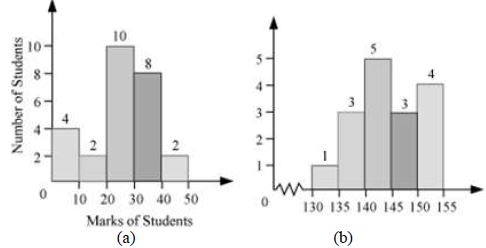 Now, consider another type of histogram shown above (b).
In this histogram, a jagged line

or broken line has been used along the horizontal axis to indicate that we are not showing the data between 0 and 130.
Let us now look at an example to understand this concept better.
Example
The given tally table represents the total runs scored by 39 batsmen in 10 different test matches. 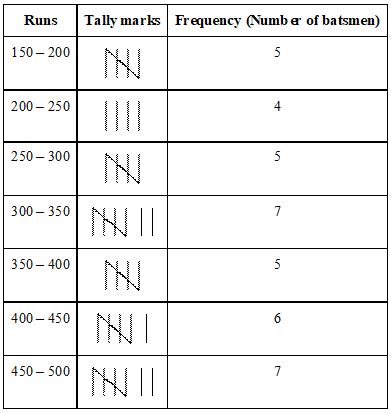 Draw a histogram for the above given distribution table.
Solution
In order to draw the histogram of the given frequency distribution table, we represent the runs on the horizontal axis and the number of batsmen on vertical axis. The height of each bar represents the frequency. The width of all the bars is same. 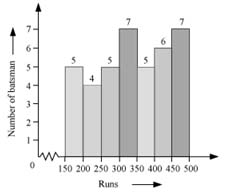 Here, we will use a broken line

to indicate that the values between 0 – 150 are not represented.

5.4. INTERPRETATION OF HISTOGRAMS
An histogram is one of the most important tool used for representation of data. One can interpret lots of information from a given histogram. So let us understand how to interpret information with help of the following example.
Example
The following histogram shows the age of the teachers in a school. 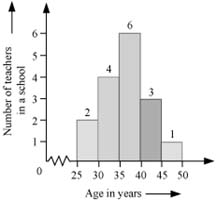 5.5. CONSTRUCTION OF A CIRCULAR GRAPH
Sometimes, the data is represented using circles. For example, the circle given below shows various nutrients present in a chocolate. 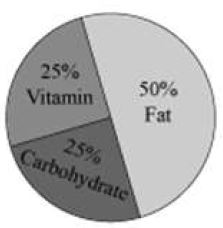 The representation of data in this form is called circle graph or pie-chart.
A circle graph shows the relationship between a whole circle and its parts. The whole circle is divided into sectors and the size of each sector is proportional to the information it represents.
Consider the following example to understand the drawing of a pie chart.
Example
The choice of food for a group of people is given below.

Draw a pie-chart for the given data.
Solution
Firstly, we will find the central angle of each sector.
Here, total number of people = 120.
The central angle has been calculated in the following table.

Draw a circl e of any radius. Then, draw the angle of sector for the north Indian food, which is 150°. Use the protractor to draw the angle of 150°. Then continue making the remaining angles (120° and 90°). The pie chart has been shown as follows. 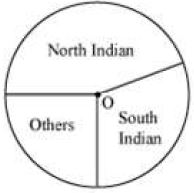 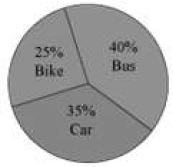 Can we find out how many students come by bike?
Let us see.
In the graph, the sector representing the number of students who come by bike is given to be 25%.
The total numbers of students are 5000.

Thus, number of students who come by bike =

In the graph, the sector representing the number of students who come by bus is given to be 40%.

Which is the most common mode of transport?
Since the number of students coming by the bus is highest, bus is the most common mode of transport.
In this way, we can interpret the information given in a pie-chart or a circle graph.
Let us now look at one more example.
Example
Mr. Nair’s expenditure on various items and his savings for a particular month has been represented in the following pie-chart. 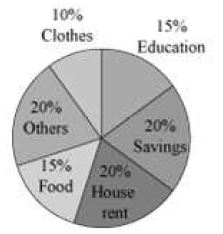 Observe the given pie-chart and answer the following questions.
1. On which of the represented items, the expenditure is least?
2. If the monthly savings of Mr.Nair is Rs 4000, then what is the monthly expenditure on food?

Thus, the monthly expenditure on food is Rs 3000.

5.7. EQUALLY LIKELY OUTCOMES
There are many situations where on a particular day, you take a chance and the things do not go the way you want. However on the other days, they do.
For example, suppose Prachi takes her umbrella everyday to her office. However, on one day she forgot to take the umbrella and it rained that day.
Sometimes it happens that you leave home just 10 minutes before the school timings and still manage to reach at time. Whereas the other day, when you left home 30 minutes earlier, still you could not reach at time because of a heavy traffic jam.
In these kinds of examples, chances of a certain thing occurring and not occurring are not equal. But there are also some cases where there are equal chances of an event to occur or not to occur.
For example, suppose you play a game with your friend where you toss a coin to decide who will play first.
When you toss a coin, you can either get a tail or a head. There is no other possibility. Also, when you toss a coin, you cannot always get what you want out of Head or Tail. There are equal chances of getting a head or a tail. Such an experiment is called a random experiment. The results of an experiment are called outcomes of the experiment. Here, when you toss a coin, head or tail are the only two outcomes of this experiment.

Consider another example. Suppose you throw a dice while playing a game. There are 6 possible outcomes (1, 2, 3, 4, 5, or 6). There is no other possibility. Moreover, the chance of getting any of these outcomes is the same.

Let us note the results we obtain, when we throw a dice, once, twice, thrice, and so on. We will observe that as the number of throws increases, the chances of getting each of 1, 2 … 6 come closer and closer to one another.
That is the numbers of each of the six outcomes become almost equal to each other. In this case, we may say that the different outcomes of the experiment are equally likely, i.e. each of the outcomes has the same chance of occurring.
Let us now look at an example.
Example
Which of the following experiments results in equally likely outcomes?
1. The school bus of Archit comes daily on time but the day he reaches early, the bus comes late.
2. Tossing of a coin 10 times
Solution
1. The chances of the bus to come on time or not on time are not equal. Thus, this experiment does not result in equally likely outcomes.
2. The experiment of tossing a coin 10 times will result in equally likely outcomes, since there are equal chances of getting a head or a tail.

5.8. CHANCE AND PROBABILITY
Suppose India and Pakistan are playing a cricket match. Can we say that India will win the match?
We cannot say whether India will win or loose the match because it is just a matter of chance.
Now, consider another situation. Suppose the weather in Delhi is very cool for a week. Can we say that there will be a thunderstorm on one particular day of the week?
No, we cannot say anything about this situation.
These are the examples which involve chances of a certain thing happening or not happening. Also, these chances are not equal. But there are some cases where, for an event happening and not happening, there are equal chances.
Let us take an example of such a case.
Suppose you play a game with your brother where you toss a coin to decide who will play first.
When you toss a coin, there are two possible results- Head or Tail. There is no other possibility. Also, when you
toss a coin, you cannot always get what you want out of head or tail. There are equal chances of getting a head or a tail.
Probability of getting a head = probability of getting a tail =

The concept of probability can be used in real life as well. Let us see how.
In the beginning, we mentioned the situation of thunderstorm in Delhi. What will be the chances of this event in terms of probability?

If, suppose, the thunderstorm occurs on 2 days of the week, then, required probability

In this manner, the concept of probability can be applied in various situations.

5.10.PROBABILITY OF EVENTS
Suppose Shashank throws a dice. There are six different outcomes. The outcomes of an experiment or a collection of outcomes makes an event.
In this example, getting the number 1 on the top face of the dice is an event. Similarly, getting the other numbers
(2, 3, 4, 5, or 6) are also known as events.
Can we tell what will be the probability of getting 2 on the top face of the dice?
Let us see.
There are six possible outcomes and all are equally likely to occur. The probability is the ratio of getting an outcome to the total number of outcomes.

Probability of an event =

Thus, probability of getting a multiple of 3 =

Now let us look at some examples.
Example
The given figure shows a wheel in which six English alphabets are written in six equal sectors of the wheel.
Suppose we spin the wheel. What is the possibility of the pointer stopping in the sector containing alphabet A? 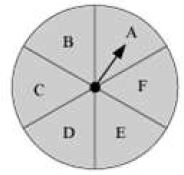 Solution
The total number of possible outcomes is 6. The pointer can stop at six different sectors (A, B, C, D, E, F).

Thus, probability of pointer stopping in the sector containing