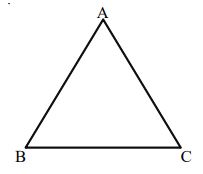 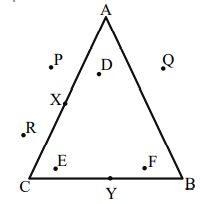 In the above figure, points D,E, and F lie in the interior of ABC points P,Q and R lie, in the exterior of ABC , while the points ‘X’ and ‘Y’ lie on ABC

• On producing the side be of ABC to a point D, the exterior angle formed is ACD and its interior opposite angles are CAB and ABC, while BCA is the interior adjacent angle
• On the producing the side of ABC to a point E, the exterior angle formed is CBE and its interior adjacent angle CBA
• On producing the side CA of ABC to a point F, the exterior angle formed is BAF and its interior opposite angles are ABC and ACB, while BAC is the corresponding interior adjacent angle
Note
The sum of the lengths of any two sides of a triangle is always greater than the length of the third side. The three line segments can form a triangle only when the sum of the lengths of two smaller line segments is greater than the length of the longest one.
2. CLASSIFICATION OF TRIANGLES ACCORDING TO SIDES
There are three types of triangles with respect to the sides
Scalene Triangle
If all three sides of a triangle are of different lengths, then the triangles is called a scalene triangle.
In the figure below, ABC is a triangle in which 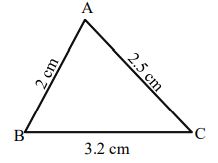 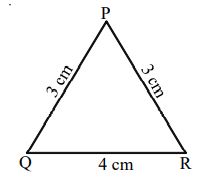 In the above figure, PQR is a triangle in which
Therefore PQR is an Isosceles triangle.

The angles opposite to the equal sides of an Isosceles triangle are equal. Since PQ = PR;

Equilateral Triangle
A triangle having all the three sides of the same length is called an equilateral triangle. 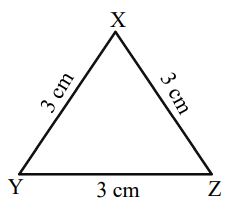 In the figure below, XYZ is a triangle in which XY = YZ = ZX. Therefore XYZ is an equilateral triangle. Each angle of an equilateral triangle measures 60°.
3. CLASSIFICATION OF TRIANGLE ACCORDING TO ANGLES
There are three types of triangles with respect to their angles.
Acute Angled Triangle
A triangle with all the three angles acute is called an acute angled triangle 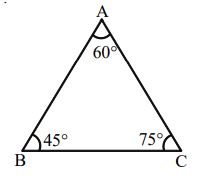 In the figure above, ABC is a triangle in which . 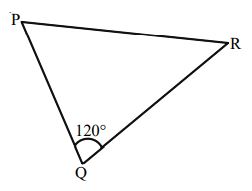 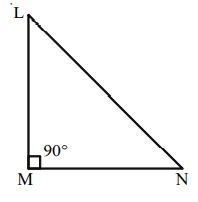 The side opposite to the right angle is called the hypotenuse of the triangle .In the above figures LMN is right angled at ‘M’ clearly , LN is the hypotenuse of LMN.
In a right angle triangle one angle measures 90° and each one of the remaining two angles is acute.
4. IMPORTANT TERMS RELATED TO A TRIANGLES
Medians
A line segment joining a vertex of a triangle to the middle point of the side opposite to the vertex is called median. All the three medians of a triangle always pass through a point.
Centroid of a Triangle
The point of intersection of all the three medians of a triangle is called its centroid. 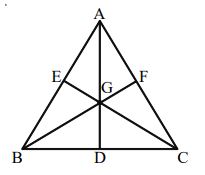 In the given figure, D,E and F are the midpoints of the sides BC, CA and AB respectively of ABC. so AD, BE and CF are the medians of ABC intersecting at a points ‘G’ .

In the given figure; so AL, BM and CN are the altitudes of ABC 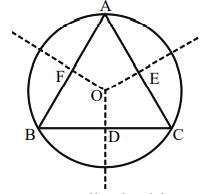 The points of intersection of all the three perpendicular bisectors of the sides of a triangle is called the circumcentre of the triangle. Then circle passing through the three vertices of a triangle is called the circumcircle. In the given figure, the perpendicular bisectors of the sides BC, CA and AB of ABC intersect at a point ‘O’. ‘O’ is the circumcentre of ABC . With ‘O’ as centre and radius OA, we draw a circle passing through three vertices A,B,C of ABC and hence this circle is the circumcircle of ABC . 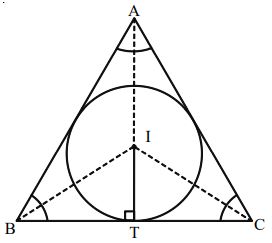 In the above figure, the angle bisectors of its angles intersect at the points I. Therefore ‘I’ is the incentre of ABC . From ‘I’ draw IL BC, with ‘I’ as centre and radius IL, draw a circle, touching the sides of ABC . Hence this circle is incircle of ABC

5. ANGLE SUM PROPERTY OF A TRIANGLE
The sum of the angles of triangle is
Proof:
Consider a triangle ABC. 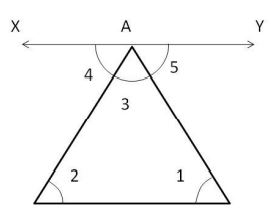 Let line XY be parallel to side BC at A.
AB is a transversal that cuts the line XY and AB, at A and B, respectively.
As the alternate interior angles are equal,

form linear angles, and their sum is equal to

Hence, the sum of the three angles of a triangle is .

6. EXTERIOR ANGLE PROPERTY OF A TRIANGLE
When a side of a triangle is produced, then the exterior angle so formed is equal to the sum of its interior opposite angles.

e.g. If 4 is an exterior angle of ABC, 1 and 2 are the interior opposite angles, then 4 = 1 + 2.
The sum of the lengths of any two sides of a triangle is greater than the third side.

7. PYTHAGOREAN THEOREM
If b and c are legs and a is the hypotenuse of a right angled triangle then, . 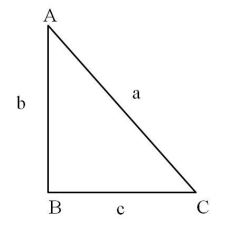 Converse of Pythagorean theorem
If the sum of the squares on two sides of a triangle is equal to the square of the third side, then the triangle must be a right-angled triangle.