1. INTRODUCTION
The day to day condition of atmosphere at a particular place is called weather. The weather can be comfortable, or can be too hot or cold.
The daily report about weather; usually released by the meteorological department is called weather report. Weather report is often shown along with the news on television.
Department of Meteorology is a Government Department. The Meteorological Department measures the elements of weather and keeps their record. Meteorologists use data from satellites and analyse the data to forecast about the weather. 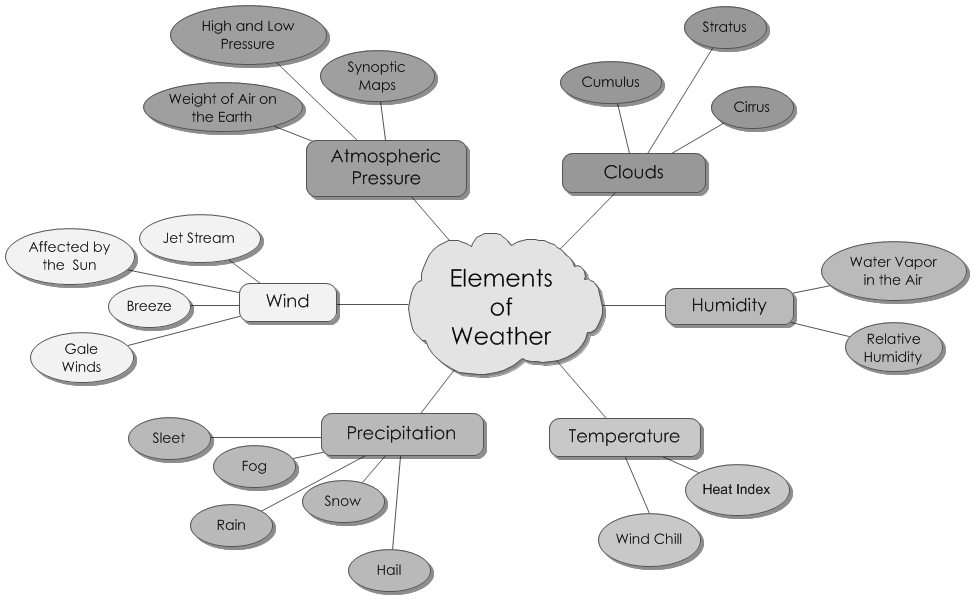 3. WEATHER MEASURING INSTRUMENTS
Different types of measuring instruments are available to measure different weather components like temperature, rainfall, wind speed, humidity etc.
1. Thermometer
A Thermometer measures the air temperature. Most thermometers are closed glass tubes containing liquids such as alcohol or mercury. When air around the tube heats the liquid, the liquid expands and moves up the tube. A scale then shows what the actual temperature is.
2. Barometer
A Barometer measures atmospheric pressure. It tells you whether or not the pressure is rising or falling. A rising barometer means sunny and dry conditions, while a falling barometer means stormy and wet conditions. An Italian scientist named Torricelli built the first barometer in 1643.
3. Sling Psychrometer
A Sling Psychrometer measures relative humidity, using the cooling effect of evaporation. Two thermometers are used in a sling psychrometer. Wet the cloth of one of the thermometers and swing the psychrometer around a few times. Water evaporates from the cloth, causing the temperatures on that thermometer to be lower the other.

A Rain Gauge measures the amount of rain that has fallen over a specific time period.
5. Wind Vane
It is an instrument that determines the direction from which the wind is blowing.
6.  Anemometer
It measures wind speed. The cups catch the wind, turning a dial attached to the instrument. The dial shows the wind speed.
7.  Hygrometer
A hygrometer measures the water vapor content of air or the humidity.

8. Compass
A Compass is a navigational instrument for finding directions.
9. Weather Balloon
It measures weather conditions higher up in the atmosphere.
10. Weather Satellite
They are used to photograph and track large-scale air movements. Then meteorologists compile and analyze the data with the help of computers.
11. Weather Maps
They indicate atmospheric conditions above a large portion of the Earth’s surface. Meteorologists use weather maps to forecast the weather.

4. CLIMATE OF A PLACE
Climate is the average weather condition of at least 25 years; in a given geographical part.
In winters, it gets dark early. Meteorologists record the weather every day. The records of the weather are reserved for several decades. These records helpful to determine the pattern of the weather at a place. The average weather pattern taken over a longer time is called the climate of the place.
The mean temperature for a given month is found in two steps. First, we find the average of the temperatures recorded during the month. Next, we calculate the average of such temperatures over many years. The result is the mean temperature.
Mean temperature helps compare the weather at two different places. For example, if we compare the temperatures of Thiruvananthapuram in Kerala and Srinagar in and Kashmir, we can conclude that Thiruvananthapuram is very hot and wet than Srinagar, which is moderately hot and wet for some parts of the year.
Consider another place like Rajasthan, which has high temperatures during most parts of the year, but very low temperatures in winter, which lasts for a few months. This region receives scanty rainfall. Therefore, it is known as typical desert climate.
North-eastern India receives rain for a major part of the year. Hence, we can say that the climate of the region is wet.

5. CLIMATE AND ADAPTATION
The average weather pattern taken over a longer time is called the climate of the place.
Different parts of the earth have different types of climate. The sun is responsible for this difference in climatic conditions.
Climate is described in terms of overall temperature distributions and air pressure. Based on the precipitation and the temperature five major types of climates are recognised. They are,
• Moist tropical climate
• Dry climate
• Humid middle latitude climate
• Continental climate
• Cold climate
(i) Moist Tropical Climates are known for their high temperatures and large amount of rain around the year.
(ii) Dry Climates are characterised by little rain and a high daily temperature range.
(iii) In Humid Middle Latitude Climates, land or water differences play a key part. These climates have warm, dry summers, and cool, wet winters.
(iv) Continental Climate is characterised by winter temperatures low enough to support a fixed period of snow cover every year, a relatively moderate precipitation occurring mostly in summer, and an even distribution of precipitation.
(v) Polar areas have cold climates as they are covered by ice almost all the year round. Most areas are covered by glaciers or by a semi-permanent layer of ice.
Climate has an intense effect on all living organisms. Animals adapt themselves to survive various conditions in which they live. Animals that live in extreme climates acquire some special features to protect themselves from it. Animals evolve to acquire these features and habits to adapt to their environment.
Example: The camel has a hump to store food in the form of fat, and hooves to tread on the desert sand with ease.

6. ADAPTATION IN POLAR REGION
Regions like, Canada, Greenland, Iceland, Norway, Sweden, Finland, Alaska in the United States and Siberia in Russia are in the northern polar region.
In Polar Regions, the sun does not set for about six months and it does not appear for another six months of the year. These regions are covered with snow for most part of the years. In winter, temperature may down to -37°C. Hence, the climate of Polar Regions becomes extreme and harsh. In spite of such condition, many animals live at those places, for example: Polar Bear, Penguin, Snow Leopard, etc. These animals show various adaptations that help them in surviving in the harsh climate of the Polar Region.
Polar bear
Polar bear has two thick layers of fur over its body. In addition to this, they have thick layer of fat under the skin; called blubber. These layers act as insulator and prevent the bear from extreme cold. Because of the white fur, the Polar Bear can easily mix with its snowy background and can hide from its prey and predator. Getting hide with surrounding because of special colour and pattern is known as camouflage.

Polar bears have wide paws with long curved nails, called claws. This helps them to move on the snow. r swimming to keep them cool. Wide paws work as a rudder, while swimming. They are very good swimmers.
Polar bear has a highly developed sense of smell. It helps the Polar bear in finding a fish even from under a thick layer of snow.
These adaptations help polar bears to survive in the extreme condition of the polar region.
Penguin
Penguins also live in the Polar Region. Penguins are of white colour with black back. They have thick layer of fat under their skin. This protects them from extreme cold.

They usually remain huddled together. This helps in keeping them warm. nd curved claws which help them to walk in snow and to swim in water.
These adaptations help the penguin to survive in the extreme condition of the Polar Region.
Birds
There are many types of birds found in Polar Regions. They fly to the warm regions during winter to survive. Long distance travel; in search of favourable climate; is called migration. 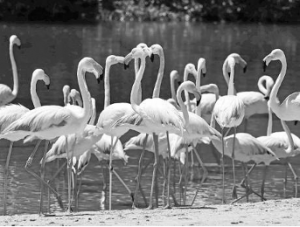 Some migratory birds are known to travel as long as 15000 km to keep them survive in opposite climatic conditions. Arctic tern is known to be the longest traveler among the migratory birds.
Migratory Birds
Apart from birds, many fish and mammals also migrate to other places in such opposite climatic conditions.
Migration of Siberian cranes
Birds have to stay warm to survive. Hence, at the onset of winter, these birds migrate to warmer areas. They come back again in the summer.
Siberian cranes migrate to far-off places like Bharatpur in Rajasthan, Sultanpur in Haryana and also to some wetlands of north-eastern India. They fly here all the way from Siberia. Birds travel thousands of kilometers to migrate. During the day, the sun guides them, and the stars do so in the night.
Fish survival in Polar region
Water retains its warmth under the icy layer. Fish go deeper in the water to stay warm.

7. ADAPTIVE FEATURES OF ANIMALS FOUND IN RAIN FOREST
Tropical rain forests spread around the equator. Temperatures like 15°C in winter and 40 ° C in summer are characteristic features of this region. Day and night are of equal duration through year.
In India, Tropical Rainforests are found in the Western Ghats and in Assam. Rainforests are also found in Southeast Asia, Central America and Central Africa.
These regions receive abundant rainfall. A significant feature about this region is the tropical forest.
A wide variety of plants and animals are found in these regions due to the continuous warmth and rain.
Rainforests have plenty of food which supports variety of life. Many animals are found in the rainforests, e.g. leopard, elephant, snakes, tigers, monkey, buffaloes, frogs, apes, lizards, many types of birds, insects, etc.
In spite of plenty of food, there is a high level of competition for survival among animals in the rainforest.

Lion
The colour of lion helps it in blending in its background. Lion has a highly developed sense of smell and night vision. All of these help a lion in catching the prey. 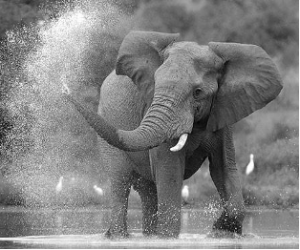 Monkeys
Monkeys are highly adapted to live in the rainforests. Monkey uses its palms and soles to grip a branch and thus can hang and swing from a branch. It can also use its tail to hold a branch. Monkeys can climb to the topmost branch of a tree and thus can see very far in the jungle. This helps them in sensing the danger and also in finding the food. 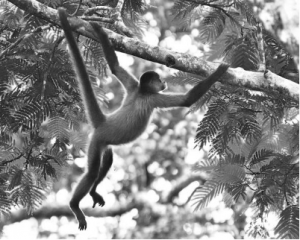 Frogs
Frogs are adapted to live both on land and in water. The greenish colour of the frog helps it in mixing with the green foliage. Frog has a long and sticky tongue with which it catches its prey. The tree-frog has developed sticky pads in its claws. This helps the tree-frog in climbing a tree and in holding on to a branch. 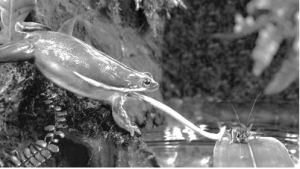