1. INTRODUCTION
All living organisms have an instinct to live their own lives and then survive through their generations. Living things take birth, grow old and die. Before death individuals give birth to the off springs (children) to continue their race.  Have you ever provoked you mind to know the process that leads to off springs?  The answer is right here . . .This survival instinct is helped by the process of Reproduction.
Giving birth to off springs, which are similar to parents, is known as reproduction.
Importance of Reproduction
Reproduction is one of the most important characteristics of life. Reproduction is the creation of new life of its own kind. Reproduction is essential for the continuation of species.  A species will disappear from the face of the earth if it does not reproduce.  Reproduction takes place in both, plants and animals.

3. BUDDING
This method is used by unicellular plants; like yeast. Yeast is a fungus and fungi are also known as non-green plants. The yeast cell produces a bud which gets its own nucleus. The bud develops to certain size and detaches from the mother cell to produce the new yeast.
Budding in yeast
Yeast is tiny, unicellular, non-green plant (which is a fungus). Yeast reproduces by budding. The Figure below shows a parent yeast cell (which is a complete plant). In yeast, first a bud appears on the outside of the cell wall. 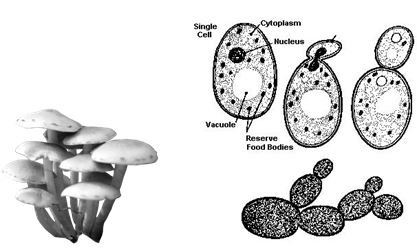 The nucleus of parent yeast cell then divides into two parts and one part of the nucleus moves into the bud. Ultimately, the bud separates off from the parent yeast cell and forms a new yeast cell (or new yeast plant). The budding in yeast, however, often takes place so fast that the first buds start forming their own buds and all of them remain attached to the parent yeast 11 forming a chain of yeast cells. After some time, all the yeast cells of the chain separate torn one another and form individual yeast plants.
Noteworthy Points
Note the formation of buds on the yeast cells and how they separate from the parent cell. In some organisms like sponges and corals, the buds remain attached to the parent organism permanently. These buds then grow and produce buds of their own. In this way, a colony of sponges or corals is formed.

4. FRAGMENTATION
The breaking up of the body of a simpler multicellular organism into two or more pieces on maturing, each of which subsequently grows to form a complete new organism is called fragmentation.
Examples: Spirogyra and sea anemones reproduces by fragmentation.
Fragmentation In Spirogyra
Spirogyra is a green, filamentous alga plant which is found in ponds, lakes and slow moving streams. Spirogyra filament simply breaks into two or more fragments on maturation, and each fragment then grows into a new Spirogyra.

5. SPORE FORMATION
Spore formation is the asexual method of reproduction.  The reproduction by spore formation takes place in plants. In spore formation, the parent plant produces hundreds of microscopic reproductive units called ‘spores’. When the spore case of the plant bursts, then the spores spread into air. When these air-borne spores land on food under favourable conditions, they germinate and produce new plants.
Examples. 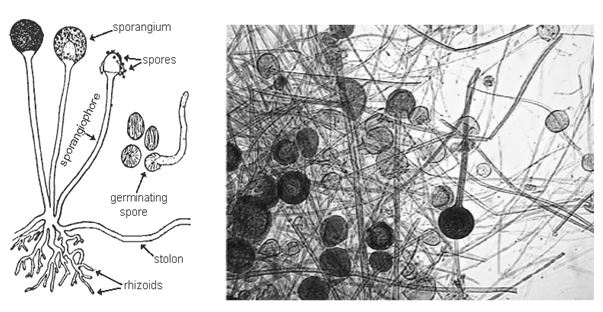 6. VEGETATIVE PROPAGATION
In vegetative propagation, new plants are obtained from the parts of old plants (like stems, roots and leaves), without the help of any reproductive organs.

(A)  Vegetative Propagation In Grass
It is a common observation that green grass plants spring up in dry fields after the rains. This happens due to vegetative propagation as follows :

(B) Vegetative Propagation In Bryophyllum 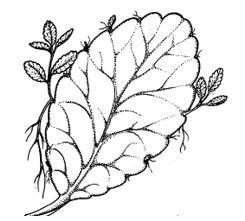 7. SEXUAL REPRODUCTION IN PLANTS
When two parents are involved in the process, it is called sexual reproduction. Two gametes, viz. male and female gametes, are formed. The fusion of male and female gametes is called fertilization. Zygote is formed after fertilization. The zygote develops into an embryo and finally into a new individual.
Flower is the main reproductive organ of a plant.

8. STRUCTURE OF A FLOWER
A flower represents the reproductive part of a plant body. It is, the most important part meant for multiplication of the species.
Often, each flower has a stalk called the pedicel. But some flowers do lack the pedicel, and such flowers are called sessile. Besides the stalk, a flower, in general, shows four sets of whorls or parts arranged in rings or whorls

3. Androecium: The third whorl is called androecium. It is composed of stamens. Stamen has two main parts. The tube-like portion is called filament. The capsule like structure at the top is called anther. The anther produces pollen grains; which are the male gametes

4. Gynoecium: The whorl at the center is called gynoecium. It has a swollen base; called ovary and a tube-like structure; called style. The top of the tube is somewhat flattened and is called stigma. Ovary produces the eggs or female gametes. Ovules and ovary finally develop into seeds and fruits respectively.

10. FERTILIZATION
Fertilization is a step between pollination and seed formation. The fusion of the male gamete with the female gamete is called fertilization.
During fertilization, the following events take place:

1. The pollen grains germinate on the stigma, and pollen tubes develop.

2. The pollen tubes move downwards into the style (Figure).

3. The pollen tubes are the carriers of male gametes. 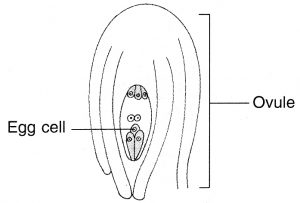 4. One pollen tube finally enters the ovule, where female gamete (egg) is located (figure) Female gamete or egg cell is present inside the ovule.

5. Finally the male gamete fuses with the female gamete. This completes the process of fertilization.

1. The flower loses its bright colour.

2. The sepals, petals and stamens fall off.

3. The ovary increases in size and becomes the fruit.

5. Inside the ovary, the ovules develop to form the seeds.

(B) Types of Fruits
(i)Dry fruit: Fruits of the type of pea are called dry fruits. The fruit wall in such fruit is thin and dry.
Examples: Cotton, lady’s finger, maize, sunflower, bean.
(ii)Fleshy fruit: On the other hand, mango fruit is a fleshy fruit, as the fruit wall is thick and fleshy.
Examples: Tomato, brinjal, orange, coconut, plum.

(C) Functions of Fruits
(i) The fruit wall gives protection to the seeds and therefore to the embryo.
(ii) The fruit is a store house of food material.
(iii) The fruit helps in dispersal of seeds.

(D) Seed
A seed contains an embryo, one or two cotyledons and a protective seed coat (Figure). The embryo, after germination of the seed, develops into a new plant. The cotyledons often contain reserve food material for the developing plant.

(E) Structure Of A Fruit
A fruit is a ripened ovary formed after fertilization. A fruit, consists of two parts
(i)  The fruit wall (or pericarp), and
(ii)  Seeds.

(F) Fruit Wall
The fruit wall develops from the wall of the ovary. It may be thick or thin. It may be dry as in pea or gram (Figure.) or fleshy as in tomato (Figure) and papaya. In fruits like mango, the pericarp may be differentiated into three layers (Figure):
The fruit wall has three layers:

1. the outer layer called the epicarp,

2. the middle layer called the mesocarp, and

3. the inner layer called the endocarp. 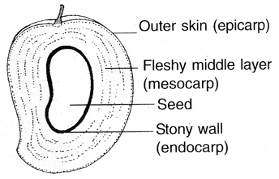 Parts of a fruit (mango)

(G) Seeds
Seeds which develop from the ovules are present inside the fruit wall. A fruit may contain only one seed (as in mango, plum) or many seeds, as in the case in tomato, orange, apple.
Fruits of the type of pea are called dry fruits. The fruit wall in such a fruit is thin and dry.
On the other hand, mango fruit is a fleshy fruit, as the fruit wall is thick and fleshy

(H) Functions of a Fruit

1. It protects the seeds from animals and unfavourable climatic conditions.

2. It helps in dispersal of seeds to distant places by means of various devices which the fruits often develop.

(I) The Seed
A seed contains a baby plant inside. It also contains food for the new plant to develop. More precisely, the seed consists of an embryo, one or two cotyledons and a protective seed coat. Embryo is represented by plumule and radicle (Figure). The cotyledons often contain the reserve food material for the developing plant. On germination, plumule gives rise to the shoot system while radicle gives rise to the root system (Figure) and thus, develops a new plant. 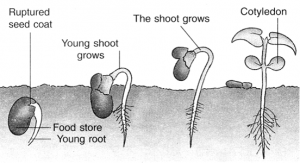 12. Dispersal Of Seeds And Fruits
Plant do not move. The seeds and fruits produced by them have developed devices which help them to be carried to faraway places. This prevents overcrowding at one place and also leads to the spread of plants to newer places. There are three main types of dispersal mechanism:
(i) By Wind (ii) By Water (iii) By Animals

(A) Dispersal By Wind
Examine the seeds of dandelion, Calotropis (madar),  Acer (maple), cotton and pine.
Seeds of dandelion (Figure) and cotton possess a tuft of fine hair, while in Acer and pine (Figure),   the fruits/seeds develop flat, wing-like structures.

The hair or the wings help in the dispersal of seeds and fruits to long distances by wind.

(B) Dispersal By Water
Coconut plants are grown on the sea shore. The fibrous fruit falls in water and is carried away from the parent plant by water currents. In lotus, the fruit floats on the surface of water and the seeds are liberated in water. Water currents carry the seeds to long distances.

Seeds and fruits dispersed by animals are either edible or develop hooks and thorns. Seeds of fruits like mango, orange and plum get dispersed after the fleshy part of these fruits is eaten by humans and birds. 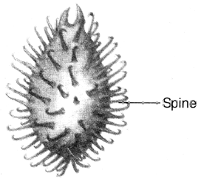 Fruit of Xanthium with spines
Fruits of gokhru (Tribulus) and okra (Xanthium) possess hooks and spines (Figure.). These fruits stick to our clothes and to the body of passing animals, and then get carried away from one place to another.
This, plants have developed various means to get their seeds and fruits carried away to long distances.
Dispersal by Bursting: Some fruits burst open when they mature. The force of bursting is enough to spread the seeds. Examples; Ladyfinger, castor, balsam, etc.
Dispersal by Humans: Human beings also help in dispersal of seeds, especially during farming.