1. INTRODUCTION
In India, our diet is mainly made up of cereals and vegetables, and these are obtained from plants. Wheat primarily comes from Punjab, Uttar Pradesh, and Haryana. The major rice-producing states are Punjab, Andhra Pradesh, and Uttar Pradesh. But why does so much of the rice and wheat come from these states? Why don’t other areas also grow as much? The answers to all these questions are hidden in just one word: soil.

2. SOIL
Soil is the uppermost layer of the Earth’s crust and is usually composed of a thin layer of mineral particles, and a layer of dead and decayed plant and animal remains called humus.
However, soil does not have the same properties everywhere, and therefore different varieties of plants grow in different areas. That is why we have some states growing more of a particular crop than others.
There are a variety of insects, reptiles, and many other animals right under our feet! Soil also provides the vital nutrients required for plants to grow and thrive. Thus, all living organisms depend directly or indirectly on soil.

3. SOIL FORMATION
Soil formation is a slow, stepwise process and it takes thousands of years to form a layer of soil just a few centimetres thick. It is a result of continuous breaking down of rocks by a process called weathering.
Weathering is the disintegration of rocks on the Earth’s surface caused by exposure to natural forces such as wind, water, frost, roots of plants, etc.
Weathering is of two types: physical and chemical weathering.
Physical Weathering
In this process, rocks are broken down into smaller pieces. It is a mechanical process and does not involve any change in the characteristics of the original rock. It may be caused by temperature differences, frost, growing roots of plants, movement of animals, etc.
Chemical Weathering
It is a process in which existing minerals are broken down into new mineral components. In this process, the chemical nature of the rock gets changed. Water is one of the main agents of chemical weathering.
Stages Of Weathering
The process of weathering can be divided into three stages:
Stage I: Huge pieces of parent rock begin to break up near the surface due to weathering, which can be physical or chemical.
Stage II: Smaller rocks continue to undergo weathering making the upper layer full of very fine rock particles. Bacteria and other micro-organisms break down plant or animal remains to form humus. This makes the soil very fertile, rich in organic material, and in several minerals vital to plant growth.
Stage III: Minerals and salts seep into the ground along with water to complete the formation of soil and make it favorable for plant growth.

4. ACTORS AFFECTING SOIL FORMATION
There are a number of factors which affect soil formation, namely,
(1) Climate,

(2) Characteristics of the parent rock, and

(3) Slope of land.
1. Climate
Climatic factors or Weathering forces such as temperature, rain, wind, etc., play an important role in loosening and breaking up rocks (physical weathering). Water in rock crevices expands when it freezes,  causing the rocks to crack. Rocks are also worn down by wind. Soil formation is fastest in hot, moist climates and slowest in cold, dry climates.
In the warm and wet tropics, bacterial activity is high, thoroughly decomposing dead plant and animal matter. As desert regions have very little vegetation and animal life, limited decaying material is available for the soil. The lack of rainfall leads to the formation of coarse-textured soil in arid regions. In areas having severe winters, bacterial activity is very slow causing dead plant and animal matter to build up. Thus, the rate of soil formation and the type of soil formed depends on the climate of a place.
2. Characteristics of the parent rock
The composition of the parent rock also determines the kind of soil formed. For example, if the parent rock is rich in  calcium, the soil formed by its weathering would also be rich in calcium
3. Slope of land
The physical features of a place also play an important role in the formation of soil. Hilly areas generally have a thin layer of soil, because running water and wind tend to take away the soil down the slope. On flat  plains, soil remains relatively undisturbed leading to the formation of a thick  layer.

5. SOIL PROFILE
Due to the physical, chemical, and biological activities that take place during soil formation, well-developed layers of soil are formed, one below the other. Typically, four distinct soil layers can be seen, distinguishable due to differences in colour and size of the particles. These layers are referred to as horizons
A vertical section that shows the distinct layers of soil or horizons when we cut straight down into the soil is known as a soil profile. 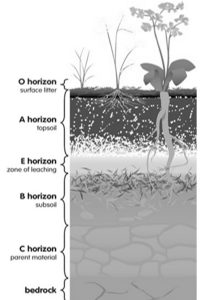 1. A Horizon or Topsoil is the uppermost layer of soil. It consists of fine particles. It is rich in humus and therefore dark in color. It is soft, porous, and can hold water. O layer which lies just above the topsoil is rich in organic matter.
2. B Horizon or Subsoil is rich in minerals and other materials, which seep down along with water. It also contains compactly packed fine particles of soil.
3. C Horizon contains partly weathered pieces of rock. It is usually characterized by cracks and crevices. It is very difficult to dig beyond this layer.
4. R Horizon or Bedrock is the lowermost layer and mainly consists of the parent rock. It undergoes weathering and starts forming the soil. The properties of this rock greatly determine the composition of the soil. 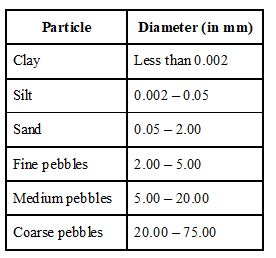 7. PROPERTIES OF SOIL
Soil has special properties which determine different soil types. These properties are
(a) Absorption of water in soil,

(b) Moisture in the soil, and

Absorption of Water in Soil
The plants that grow on land grow in the soil, and they require water in the soil to help them grow. If the soil can ‘hold’ water, the plants will grow well. If the soil does not hold water, the plants would need frequent watering or they would die. The amount of water a particular type of soil can absorb is its water absorption tendency. Higher the absorption of water by soil, higher is its availability to plants.
Moisture in the Soil
When you take a little bit of soil and heat it in a test tube, you will see tiny droplets of water condensing near the mouth of the test tube. Where did this water come from? Soil has some amount of water present inside it as moisture. We can estimate the moisture content of the soil by the look and feel of it. Soil moisture helps to determine when it needs to be irrigated and how much water it needs.
Percolation Rate of Water in Soil
The rate at which water exits the soil is known as its percolation rate. Different soils have different percolation rate of water. For proper plant growth, it is important to check the percolation rate of water in soil. In well-drained soil, water will pass rapidly after it is irrigated. On the other hand, soil with a poor percolation will hold too much water for too long a time, which can be harmful to plants.

9. SOIL SUITABILITY FOR CROPS
A soil suitable for growing crops has to be fertile. What does it mean for a soil to be fertile? Soil fertility refers to the capacity of the soil to provide nutrients in adequate amounts and in proper balance for the growth of plants. For a soil to be fertile, other growth factors such as light, moisture, and temperature should be favourable.
To make a soil more fertile, some adjustments are done to its property. These adjustments are
(a) Alteration of pH, (b) Alteration of air content (aeration), and (c) Addition of fertilizers.
Acidity or alkalinity (pH) affects the ability of plant roots to take up minerals from the soil. A fertile soil should have somewhat neutral pH. Lime (calcium carbonate) is added to acidic soils to raise the pH (make soil more alkaline). Peat is added to alkaline soils to lower the pH (make soil more acidic). Soil with a low air content have high water content, and so are heavy and difficult to work. It can be improved by drainage of water from the soil of a given area and by ploughing. Fertilizers are added to soil which have low mineral content such as nitrate, phosphate, potassium, and magnesium.

10. SOIL EROSION
Sometimes wind and water remove the fertile topsoil reducing the productivity of the soil in that area.
This removal of soil by running water and wind is known as soil erosion. Generally, the rate of removal of fine particles from the surface is the same as the rate of formation of soil.
But sometimes disturbance in this balance, usually man-made, lead to a greater rate of removal of soil.
The major causes of soil erosion are:
◊ Deforestation:
The removal of trees on a large scale is known as deforestation. When trees are removed, soil particles are left loose and can be easily carried away by running water and wind
◊ Overgrazing:
Repeated grazing by animals on the same patch of land without sufficient recovery periods, leads to the removal of grass on a large scale. This makes it easy for wind and running water to erode the soil
◊ Floods and heavy rainfall:
Floods and heavy rainfall wash off soil, especially when there are no trees and the land is lying bare.
◊ Improper farming: Improper farming on hills make it easy for wind and water to erode soil.
Prevention of Soil Erosion
Reduction or prevention of soil erosion is called soil conservation.
The following are some of the measures that help in conserving soil:
◊ Planting of trees in large numbers on deforested land (which is called afforestation). Grasses and herbs can be used to cover large patches of loose soil.
◊ Overgrazing of a single patch by animals should be avoided. Animals should be moved to a different area after some time.
◊ Floods can be controlled to a large extent by building dams. Embankment or mud walls should be constructed around hill slopes or fields to stop the flow of water.
◊ Terrace farming should be adopted in hilly areas. In this method, suitable crops are grown on sloping ground which is cut into large steps called terraces. This reduces the speed with which water flows down, thereby reducing soil erosion.

11.  SOIL POLLUTION
Soil is one of the most valuable natural resources.
It can get polluted by various means, including careless human activities.
Necessary measures should be adopted to control soil pollution.
The major sources of soil pollution are:
◊ Acid rain and acid water from factories, mines, and industries.
◊ Improper dumping of garbage and sewage wastes in soil.
◊ Excessive use of pesticides and fertilizers, which get accumulated in soil.
◊ Waste materials such as plastic and metals which do not decay easily.
◊ Spilling or leakage of chemicals.
Control of Soil Pollution
The following measures will help to control soil pollution: