1. INTRODUCTION
All livings beings require food, water and oxygen for their survival and to perform various activities. Food we consume is digested in to simple absorbable substances called as nutrients in the digestive system.
The circulatory system helps in the transport of nutrients in the glucose, amino acids and fats to different parts of the body. Every cell receives absorbed nutrients through the circulating fluid tissue called as blood.
Excretory system is responsible for the removal of waste from different parts of the body. Every cell releases its waste material into the blood to be carried over to excretory organs for expulsion.

• Blood is a fluid tissue that flows in special tubes called as blood vessels. Different functions of blood are elucidated.

• Blood helps in transportation of food and water from the digestive system in the body to all the cells in the body.

• Blood helps in transportation of oxygen from the respiratory system to the cells present in all parts of the body.

• Blood helps in transportation of harmful and unwanted wastes from the cells to the excretory Blood is made up of plasma and formed elements.

• Blood provides resistance to the body against pathogens and infections they cause in different parts of the body.

CONSTITUENTS OF BLOOD
a) Plasma is the fluid part of blood which contains 90% water. It is pale yellow in colour. It carries nutrients, enzymes and waste materials in it.
b) Formed elements are made up of three different types of blood cells. These include red blood cells, white blood cells and platelets. Each of these cells performs a specific function.
(i) Red blood cells – RBCs are disc-shaped cells which transport oxygen to different parts of the body. The presence of haemoglobin gives blood its red colour. Haemoglobin is an iron-containing pigment that combines with oxygen to form oxyhaemoglobin. As the blood reaches the cells, oxyhaemoglobin dissociates to release oxygen which is supplied to cells. In the cells, carbon dioxide binds with haemoglobin to form carboxy-haemoglobin. In the lungs, carboxy-haemoglobin dissociates to release carbon dioxide which is expelled out.
(ii) White blood cells – These cells are also called as WBCs. These cells are larger than RBCs. White blood cells help in defending the body against infections. White blood cells have the capability of destroying foreign cells. WBCs can move on their own and can enter the areas of infection by passing through the membranes of blood vessels. These are of many kinds – Leucocytes, basophils, neutrophils, eosinophils etc.
(iii) Platelets – Platelets are the non-nucleated irregularly shaped blood cells which bring about clotting of the blood. These are also called as thrombocytes as they release thromboplastin which brings about clotting of blood. Platelets immediately come to the place of injury and lyse themselves to   release thromboplastin. The remnants aggregate in large amounts to form a plug on the injury preventing the blood loss.

• Blood flows through narrow pipe-like structures in the body known as blood vessels.

• These blood vessels transport food, oxygen and waste throughout the body. Blood vessels are of three types namely, arteries, veins and capillaries. • Arteries are the blood vessels which carry fresh oxygenated blood to all parts of the body.

• Arteries carry blood away from the heart.  All the arteries except for pulmonary artery carry fresh oxygenated blood.

• Oxygenated blood is pumped by the heart with a great pressure into arteries, hence they have thick elastic walls.

• Arteries transport bright red oxygen rich blood from the heart to the other parts of the body.

• Pulmonary artery carries impure blood to the lungs from heart.

• Veins are the blood vessels which carry deoxygenated blood from all parts of the body to tissues to the heart.

• Veins have valves on their inner lining that allow blood to flow only in one direction.

• In the tissues, number of capillaries join together to form a vein.

• Pulmonary veins carry pure blood from lungs to the heart.

• Blood capillaries are the thinnest blood vesels which are in direct contact with the cells.

• Capillaries nourish the cells of the tissue with oxygenated blood.

• They have thin membranes through which oxygen and nutrients get into the cells.

• Veins in turn receive carbon dioxide and waste products from the cells.

• Later, all these capillaries of that tissue at another end combine to form a vein.

• This vein carries deoxygenated blood to the heart.

• Deoxygenated blood is sent to lungs for purification. • The heart is the central organ for pumping the blood throughout the body. Heart is made up of strong cardiac muscles.
• It is located in the chest cavity with its lower part pointing towards the left. Its size is that of the person’s fist.
• It pumps blood rich in carbon dioxide to the lungs and oxygen-rich blood to other parts of the body.
• The heart consists of four chambers namely auricles and ventricles. The two upper chambers of the   heart are known as the auricles. The two lower chambers of the heart are the ventricles.
• Left and right parts of the heart are separated by a muscular partition called as septum.
Heart has number of valves which allow the blood to flow in one direction. These valves prevent the oxygenated blood mixing with de-oxygenated blood.

• Purification of blood is a stepwise procedure happening in a sequence. Double circulation is observed in human beings. Blood passes twice through the heart. • Heart beat is the combined effect of contractions and relaxations of the cardiac muscles occurring in two batches.

• Two auricles contract first to force the blood into two ventricles on either side. This produces a ‘lub’ 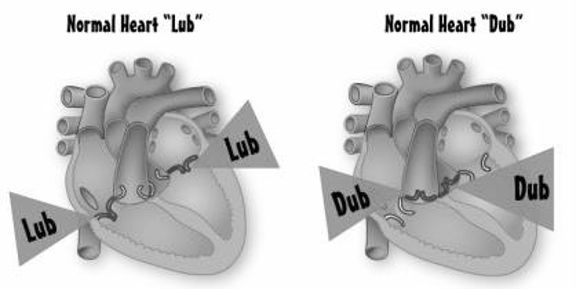 • The rhythmic contraction and relaxation of the heart constitutes heartbeat.

• Heartbeat can be felt by placing the palm on the left side of the chest.

• Stethoscope is a device that amplifies the sound of your heartbeat. • Pulse is the throbbing sensation in the wrist region signifying the blood rushing through the arteries.
• It is the pressure applied by blood on the walls of an artery at a particular part of the body.
• The number of times the heart beats in a minute is the same as the pulse rate.
• The ideal pulse rate is 70 to 80 per minute.

In organisms like Amoeba, Paramecium. Hydra, most of the metabolic wastes are removed through the general surface of the body by the simple process of diffusion. Specialised organs of excretion are lacking. 5. HUMAN EXCRETORY SYSTEM
Human body has various organs to get rid of wastes.
1. Lungs — for excretion of carbon dioxide and water vapour produced during respiration.
2. Skin — for excretion of urea, salt and excess water by means of sweat glands present in the skin.
3. Large Intestine — for excretion of some wastes along with faeces through anus.
4. Kidneys — for excretion products like urea and nitrogen in urine.
5. Liver — for removal of wastes from the blood.
Excretory system consists of the following organs (Figure):
1.   A pair of kidneys        2.  Ureters              3.  Urinary bladder            4.  Urethra.
(i) Kidneys are bean-shaped structures, about 10 centimetres long.

(ii) They are located just above the waist on either side of the backbone.
(iii) Each kidney consists of a large number of coiled tubes called nephrons.
(iv) Nephrons act as filters.  They filter waste products from the blood.
(v) The waste materials collected in the kidney form the liquid urine. Urine contains 95 per cent water, 2.5 per cent urea and 2.5% waste products.
(vi) A narrow tube called the ureter runs from the inner side of each kidney.
(vii)  The ureters, in turn, are connected to a large sac called the urinary bladder.
(viii) Urine passes from the kidney through two ureters into the-urinary Nephrons bladder.
(ix) Urine is collected and stored here. Nephrons, the coiled
(x) Leading from the bladder is another tube called the urethra. Urethra works as the outlet passage tor urine. • The way in which waste chemicals are removed from the body of the animal depends on the availability of water. Aquatic animals like fishes, excrete cell waste in gaseous form (ammonia) which directly dissolves in water. Some land animals like birds, lizards, snakes excrete a semi-solid, white coloured compound (uric acid). The major excretory product in human sis urea.

• Sometimes a person’s kidneys may stop working due to infection or injury. As a result of kidney failure, waste products start accumulating in the blood. Such persons cannot survive unless their blood is filtered periodically through an artificial kidney. This process is called dialysis

6. TRANSPORTATION IN PLANTS
Plants are the organisms exhibiting autotrophic mode of nutrition. They synthesise their food by a physico-chemical process known as photosynthesis occurring in the leaves. Leaves are considered to be food factories.
Raw materials for the process of photosynthesis should be transported to leaves.
Starch synthesised in the leaves should be sent to different parts of the plant where it can be utilised or stored for future use.

7. TRANSPORTATION OF WATER AND MINERALS

• Transportation in plants is a vital process to circulate water, essential nutrients, excretory products and gases within the plant for various purposes.

• Transportation in plants is mainly brought about by vascular tissues.

• Vascular tissues are the conducting tissues formed by xylem and phloem in plants.

• Water and minerals are transported to various parts of a plant by a suction force.

• It is the vascular tissue extending from top to bottom of the plant.

• Xylem is made of several kinds of cells. The important ones are the thick-walled, tubular cells, often dead at maturity. These are called vessels.
• Xylem helps in the transport of water molecules and dissolved substances from the root hairs to aerial parts of the plant.
• Xylem transports water in one direction. Xylem mostly occupies the  centre of the vascular bundle.
• Xylem mainly comprises different types of cells namely, tracheids, vessels, xylem parenchyma and xylem fibres. 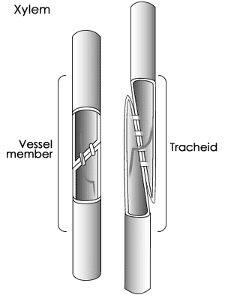 • It is the vascular tissue which transports food molecules to the place of necessity in the plant. 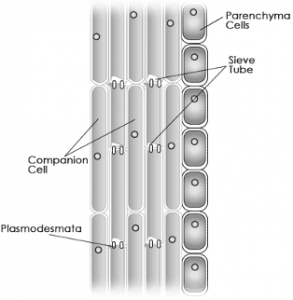 9. TRANSLOCATION
It involves the transportation of synthesised food molecules to different parts of the plant.

Differences Between Transpiration and Translocation

10. EXCRETION IN FLOWERING PLANTS
Excretion of waste products is very simple and much less in plants as compared to animals. The waste products of one process are often used as raw materials in another process. This is very clear if you study photosynthesis and respiration.
Excess food material in many cases is stored in roots, stems, leaves and seeds. These plant organs are often eaten by man. The various methods of excretion are given below:
1. Waste products of photosynthesis and respiration – – oxygen, carbon dioxide, water and heat are released into .the atmosphere through stomata in the leaves and lenticels in stems. The  waste products of one process are, however, usable as raw products in another process.
2. Ammonia is formed as a breakdown product of proteins. Plants use this ammonia to synthesise useful compounds.
3. Some of the waste products of photosynthesis collect in the leaves and bark of trees. Plants shed their leaves and bark to get rid of these wastes.
4. Some waste materials keep accumulating within cells. Calcium oxalate crystals, called raphides, are such wastes. Yam (zimikand) is rich in raphides.
Several of the plant wastes are useful to us.

Latex, a white milky fluid, oozes out from any cut on the stem is case of some plants. Latex from rubber plant is used for making rubber. Resins are used for preparing varnish.

Was this article helpful to you? Yes 30 No 1