1. Introduction
Energy is needed by living as well as non-living things to do work. Without energy, they stop doing work. Our body needs energy to carry on its activities.
Where from do we get this energy? We have earlier studied that we all eat food. The food we eat is broken down into simpler forms during digestion. The digested food is then absorbed by the walls of the intestine and carried by blood to different parts of the body.
How is the energy stored in the food (as chemical energy) used? This can be done by oxidation of the food materials. During oxidation, oxygen combines with the food we eat, liberating energy and carbon dioxide (a waste product).
This process of energy production takes place all through the day.
Respiration can, thus, be represented as follows:

The released energy is stored in some special molecules.
Characteristics Of Respiration
Respiration is characterised by following acts:
1. Food is used up.
2. Energy is produced.
3. Exchange of gases occurs. Oxygen is used up and carbon dioxide is given out.
All the three acts take place in living cells.
Respiration is a process common to all plants and animals. It is a process whereby living organisms produce energy from the food they eat. This energy is necessary for various life activities. Oxygen is required for this process and carbon dioxide is formed as a waste.

2. TYPES OF RESPIRATION
Respiration is of two types based on whether oxygen is used up in this process or not.
Aerobic Respiration
Most organisms require oxygen for respiration; such a respiration is known as aerobic respiration.

Anaerobic Respiration
There are, however, some organisms like yeast and some bacteria which do not require oxygen. They can live without oxygen. Respiratory process in the absence of oxygen is called anaerobic respiration.

3.  PROCESS OF RESPIRATION
The process of respiration consists of two main stages:
(i) Breathing or external respiration: A physical process in which an organism takes in (inhales) oxygen and gives out (exhales) carbon dioxide. This process involves exchange of gases only. The exhaled air has more carbon dioxide than the inhaled air.
(ii) Cellular respiration or internal respiration: A chemical process in which food molecules are broken down into simpler molecules within cells and energy is produced. A number of chemical reactions catalysed by enzymes occur during this process.

4. COMBUSTION AND RESPIRATION
Is the process of respiration similar to burning or combustion (of petrol or diesel in vehicle)? When we burn petrol or wood, oxygen is used up and carbon dioxide is given off. The energy is produced in the form of heat and light (flame). Something similar happens in our body.
Yes, the two processes differ in many respects. The table given below lists the differences.

5. RESPIRATION IN PLANTS
The process of respiration is similar in all organisms, whether plants or animals – carbon dioxide is given out and oxygen is used up, and a lot of energy is produced.
In plants, specific organs for breathing are absent. The exchange of gases, however, occurs by the process of diffusion. Diffusion of gases (oxygen and carbon dioxide) occurs through three sources.
(1) Through stomata (singular stoma), the minute openings on the surface of leaves.
(2) Through lenticels, openings present in old stems, and
(3) Through general surface of the roots.
In aquatic plants, gases diffuse through the body surface.

Cellular respiration in plants is similar to that found in animals. It occurs inside mitochondria.

6. RESPIRATION IN ANIMALS
Exchange Of Gases – Breathing
Different organisms have different methods of breathing:
(i) In Amoeba, for example, breathing occurs by simple diffusion (Figure). Hydra also breathes through the body surface.
(ii) In insects, movement of skeleton draws air in and out of the openings called spiracles (Figure).

These openings are present on the body surface. 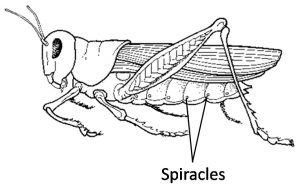 Spiracles in an insect 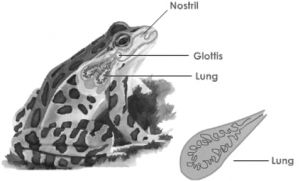 Lungs of a frog

(v) Earthworms absorb the atmospheric oxygen through their moist skin.

(vi) We breathe through our lungs. Movements of the ribs and diaphragm help to draw air in and out of our lungs through nose. 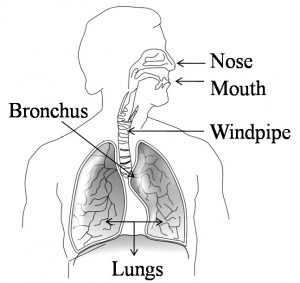 Respiratory system
When a person breathes in, air passes into the body through the respiratory tract starting with the nose. The hair inside the nose traps and stops the harmful particles from entering inside. The nose also warms the air.
From the nose, the air goes down the wind-pipe or trachea. From here, the air goes through two smaller tubes called bronchi (singular bronchus), one of which enters each lung. The lungs are large, soft organs.

In the lungs, each bronchus divides and re-divides into finer tubes called the bronchioles. Windpipe each bronchiole ends in a number of air sacs, called alveoli (singular alveolus). Alveoli have very thin walls and are supplied with blood capillaries (Figure ). It is here that air is received from the bronchi, the proper gases are used, and unwanted gases are forced out. Thus, exchange of gases takes place in the alveoli. 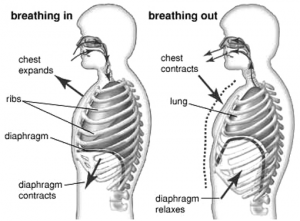 How does air move in and out of lungs?
Take in a deep breath. Now breathe out.
Lungs are present in the chest cavity. The ribs surround this cavity on the sides. A large flat muscle called diaphragm forms the floor of the chest cavity.
During inhalation (breathing in), two things happen –
(i) the ribs move out

(ii) the diaphragm moves down.

This makes the chest cavity larger. Air then rushes into the lungs. The lungs inflate.
During exhalation (breathing out)
(i) the ribs move downwards and inwards,
(ii) the diaphragm moves up.
Thus, the chest cavity is reduced. Air rushes out of the lungs. The lungs become smaller (Fig).
Tidal volume
It is the volume of air that moves in or goes out in a single stroke, and is about 500 ml.

Note: The blood of insects, like the cockroach, is colourless.
Role Of Blood In Respiration
Blood is red because of the presence of a certain type of cells in it. These are the red blood cells. The red blood cells contain a pigment called haemoglobin. This pigment gives its red colour to blood.
Haemoglobin carries oxygen molecules as oxyhaemo-globin. This substance acts as a respiratory carrier in the body. Oxygen diffuses to the cells as blood passes through tissues. At the same time, the blood collects carbon dioxide from the tissues and carries it to the lungs for breathing out.