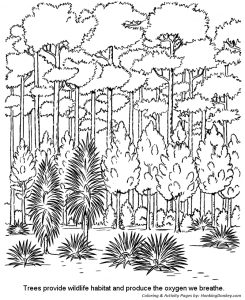 Forests include varieties of living organisms in them.  Forests are constantly changing ecosystem. The organisms living in the forests are interdependent on each other. Forests either directly or indirectly affect the human beings also.

2. STRUCTURE OF THE FORESTS
Plants in the forests are divided into three categories namely, herbs, shrubs and trees. All these categories vary in their size, shape and other characteristics. These are also covered by creepers and climbers. 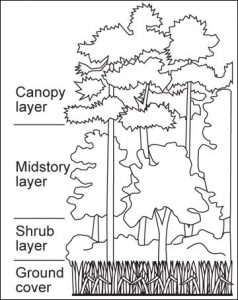 The part of the tree with branches resting on the trunk is called as crown of the tree. Crowns of different trees exist in different sizes making up storeys in the forest. The horizontal layers formed by crowns of different trees are termed as under storeys.
·    Giant and topmost storey is formed by tall trees.
·    Shrubs and tall grasses make up the middle storey.
·    Lower storey is made up of herbs.
II. Canopy
The roof like structure formed by branches of tall trees is termed to be canopy. Canopy prevents direct downpour of rainfall. This in turn prevents water stagnation in the forests.
III. Soil
The soil of the forest is moist and warm as it is covered with leaves and fruits.

• Soil in the forest is very fertile and the top most layer of organic matter is called as humus.

• The floor of the forest is soft and spongy due to dead and decaying matter.

3. FORESTS – INTERDEPENDENCE
There is lot of interdependence between organisms in the forests.

• Organisms living in the forest depend upon abiotic factors like air, availability of water, temperature, sunlight etc.

• Wild life in the forest includes both plants and animals. All these organisms are interdependent on one and other.

• Plants can synthesize their own food and store in their body.

• Animals make use of this food for survival.

• Some animals depend on smaller animals for food.

• In turn, plants also depend on animals for the processes like pollination and seed dispersal.

• Animals also add their excreta to the soil which is decomposed to add nutrients to it.

• Dead bodies of animals also decay and release nutrients to the soil. These nutrients are utilised by the plants for their growth.

• The chain of events occurring in the environment to transfer energy from one level to another is referred to as food chain.

• Food chains help in studying the interdependence of animals and plants. Each level in the food chain is called as trophic level.

• Energy is transferred form one trophic level to another level in a food chain.

• Food chains maintain a balance in the environment by cycling the nutrients absorbed by plants from the soil.

Based on the nutrition of an organism, food chain comprises of different levels which include producers, consumers and decomposers.
a. Source of energy: Sun is the ultimate source of energy for all living organisms on earth.
b. Producers: Plants are called producers as they prepare their own food by the process of photosynthesis. Photosynthesis involves the conversion of solar energy into chemical energy to synthesize starch. Energy from the sun enters the food chain. Photosynthesis is a process by which green plants can synthesize glucose from raw materials like carbon dioxide and water in the presence of sunlight and chlorophyll. First level in the food chain is occupied by plants.
c. Consumers: Based on the food they eat, consumers are categorized into primary consumers, secondary consumers and tertiary consumers.

• Primary consumers are the animals which directly consume plants. Hence, herbivorous animals occupy the second trophic level in the food chain. Energy from plants is transferred to herbivores.

• Secondary consumers are the animals which consume herbivores and are called as carnivorous animals. They occupy the third trophic level in the food chain. Energy from herbivores is transferred to carnivores.

• Tertiary consumers are the carnivores which consume other carnivorous animals. They occupy the top most level in the food chain. Energy from the third level of the food chain is transferred to the final level. 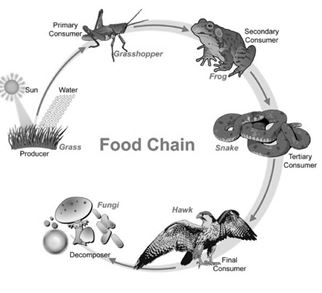 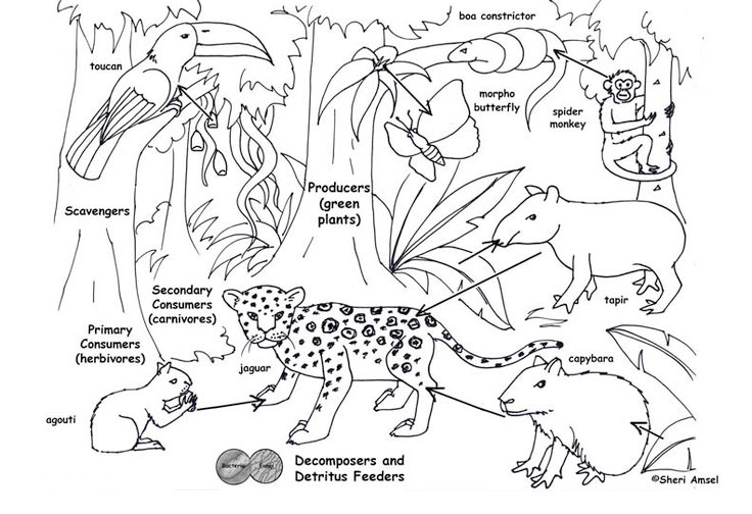 4. CONSERVATION OF FORESTS
Forests proved to be our lifeline should be conserved. Different practices and steps are to be taken to conserve forests.

• Forests should be protected from over-exploitation of the resources provided by them. This requires planned collection of the products they provide us.

• Forest fires should be controlled. Necessary steps must be taken during lightnings and storms to control forest fires.

• Afforestation should be practiced in order to convert barren lands into forests.

• Forests should be protected from the diseases caused by various pathogens.

• Forests should be protected from the action of deforestation and overgrazing.

5.  FORESTS – A CASE STUDY
There are many forests in India. One of the Indian state with great forest resource is Kerala.

• Kerala
Kerala, one of India’s southern states is also known as “God’s own country”. It is rich in natural vegetation.

• The forests are spread over a large area. They are tropical wet, evergreen, partly evergreen, deciduous and dry forests.

• Some plants found in these forests are known for their medicinal value. 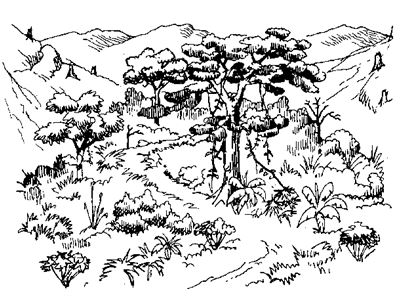 • These forests have given Kerala its healing touch in the form of Ayurvedic medicines for treating various ailments. Kerala’s forests have huge neem trees that can grow up to a height of 50 to 65 feet. The neem tree has high medicinal value and is said to treat around 40 diseases. The wood of the neem tree is used to make a musical instrument called the dhol.

• Trees such as the bamboo, which can grow at the rate of 45 inches in a day, the fig tree, the amla tree or the Indian gooseberry, the sal tree, the sandal wood tree, the teak tree and many more are found in these forests. An example of forest is Wayanad Wildlife Forest.

It is a large collection of flora and fauna. Endemic species are the animals and plants found in a specific area. Many endemic species of animals, such as pale-faced monkeys called bonnet macaques, striped-neck mongoose, small Indian civet, striped hyena, jackal, Indian fox, wild bear, giant squirrel, bison, chital and others, are found in this forest. 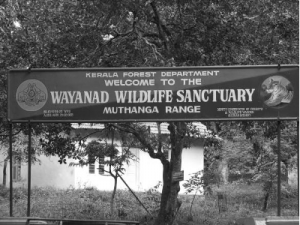 6. SIGNIFICANCE OF FORESTS
Forests serve different purposes. Forests are a very important natural resource provided to us. It is very important for every country to have 30% land covered by forests.
I. Preservation of Water Cycle
Forests maintain the water cycle on earth. Plants in forests absorb water from the soil through their roots. 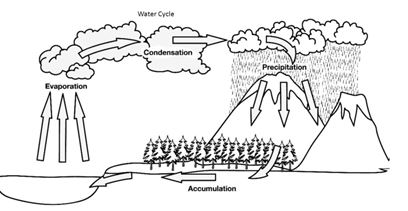 •  Transpiration is the process by which plants release excess water into the atmosphere in the form of water vapour.

•  Condensation is the process by which water vapour along with water vapour from the oceans rises in the atmosphere and condenses to form clouds.

•  Precipitation involves moving of clouds on to the land due to sea breeze and result in rainfall.

•  Rainwater seeps into the ground and increases the level of water table.

II. Maintenance of Temperature and Oxygen Levels|
Transpiration involves the release of water vapour into the environment thereby cooling the hot air. This helps in regulating the temperature in atmosphere.

•  During photosynthesis, plants take in carbon dioxide to prepare food thereby decreasing its excess amount in the atmosphere.

•  During photosynthesis , plants release out oxygen as a by-product. Oxygen is essential to animals and human beings. Plants make our air fresh with oxygen. Hence, forests are termed to be ‘Green Lungs’. More the number of trees, more is the oxygen released.

III. Prevention of Global Warming
Carbon dioxide is considered to be a greenhouse gas. Its increased level in the atmosphere results in greenhouse effect thereby causing global warming.

•  Trees in the forests absorb carbon dioxide from the environment during photosynthesis and regulate its levels in the atmosphere.

•  Global warming is prevented by forests. 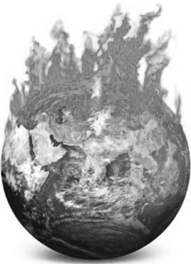 IV. Prevention of Dust Storms and Soil Erosion
Trees in the forest hold the soil firmly with their roots which bind with the soil particles and prevent it from erosion. 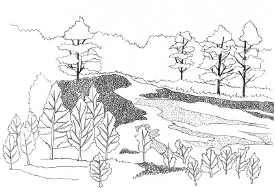 •  Wood is used in constructions, furniture and some of it is also used as fuel.

•  Charcoal is also used as a fuel which is made from firewood.

VI. Forests and Their Products

•  Trees provide us with variety of vegetables and fruits.

•  Trees provide us medicinal products used in curing many diseases and healing purposes.

•  Trees provide us with latex, gums and resins.

•  Trees inhabit lac insects which in turn provide us lac.

•  Trees support bee-hives which in turn provide us honey and bee wax.

•  Forests provide us with spices and oils.

•  Forests are abode of wildlife. We obtain bones, hides and fur from animals.

•  Animal bones are used in making animal charcoal. Charcoal is used as a source of energy in sugar industries and oil refineries.

VII. Forests as Breeding Grounds
Since forests are natural habitat for a variety of wild plants and wild animals, there is a lot of chance for inter breeding of organisms.

•  Due to safe and favourable environment for breeding, there is a chance for evolution of new life. 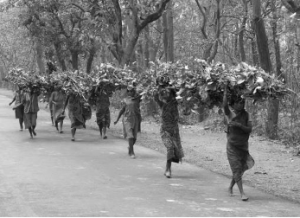 Forests provide shelter for many people along with animals and plants. The people living in forests are termed to be tribals.

•  Tribals depend on forests for their livelihood.

•  Forests act as a protective camouflage for the organisms living in them.

IX. Forests and Food Chains
Forests inhabit many animals and plants. Living organisms based on their nutrition are classified into different types namely producers, consumers and decomposers.

•  Producers synthesise their own food.

•  Consumers depend on produces or other consumers for their food.

•  Decomposers depend on dead and decaying matter for their food. 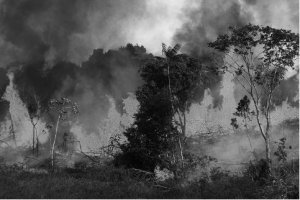 Destruction of trees in the forest area and converting large area of land as a habitat for human beings is called as deforestation. Deforestation has many ill-effects on the environment.

•  Loss of different species of animals and plants. Food chains are disturbed due to their loss.

•  Soil is eroded easily by wind and water.

•  Increase of carbon dioxide levels in the atmosphere due to the absence of trees for absorbing this gas.

•  Increased CO2levels lead to global warming which inturn cause melting of polar icecaps.

•  Rainfall becomes scanty as there are no trees.

•  Tribals living in the forests lose their habitat. 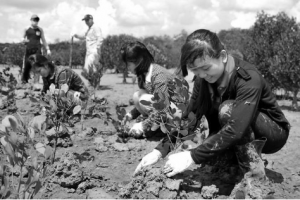 Afforestation is planting of trees in barren lands to increase the area under forests.

Was this article helpful to you? Yes 3 No 4