1. INTRODUCTION
If we enter a dark room, objects present there are not visible. However, if a bulb is switched on, everything in the room becomes visible. It shows that for vision the presence of light is essential.
Definition of Light: It is an invisible energy which causes in us sensation of sight (vision). Since light is obtained from heat energy, i.e., when an object is heated to a temperature beyond [500 0C, we can say that light is a kind of energy].
It must be kept in mind that light energy makes the surrounding objects visible, but by itself it is an invisible energy.
Example: If we are seeing a coloured poster, then we are seeing only the poster and not the  coloured lights reflected fronts it. It is because light is invisible. The various colours reflected from the poster excite the retina of the eye, which in turn sends a message to the brain. It is the brain which finally makes out the colours of the poster. Thus, we can conclude that light is an invisible energy which causes in us sensation of vision.
Sources of Light: Sun is the primary source of light for mankind. In addition to it, lighted bulb, a fluorescent tube, a lighted candle ,a kerosene oil lamp, etc., are other sources of light.
Speed of Light: Light travels at very fast speed i.e., m/s. It means the speed of light is 300000000 m/s or 300000 km/s.
Luminous Bodies: The bodies which give out light energy by themselves are called luminous bodies. Examples: The sun, the stars, glow worm etc.
Non-luminous Bodies: The bodies which do not give light energy by themselves , but reflect the light energy falling on them are called non-luminous bodies. Examples: moon, wood, furniture etc.

10. Beam of Light: A collection of number of rays of light is called beam of light.

11. Parallel Beam: When the rays of light travels parallel to each other, then the collection of such rays is called parallel beam.

12. Divergent Beam: When the rays of light originating from a point ,travel in various directions, then the collection of such rays is called divergent beam. 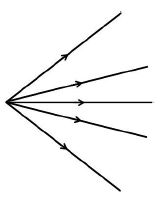 Example: The rays coming out from a bulb or a burning candle or a car headlight constitute a divergent beam.
Note: A point source produces a divergent beam of light.
13. Convergent Beam: When the rays of light coming from different directions, meet at a point then the collection of such rays is called convergent beam.

Example: If a parallel beam is made to pass through a convex lens, then it meets at a point. This kind of collection of rays is called convergent beam of light.

4. PIN HOLE CAMERA
1. Principle: It is based on the principle of rectilinear propagation of light.
2. Construction:
(a) It consists of a rectangular card board box, such that its one side is made of ground glass screen.
(b) The side opposite to the ground glass has a hole of the size of pin head in its middle .
(c) The box is blackened from inside so as to absorb any rays of light falling on its walls, directly or indirectly.
3. Working: Consider an object AB in front of pin hole camera . The rays of light starting from various points of object travel in all direction. A ray of light starting from point A and travelling along AH, on passing through pin hole strike the screen at . 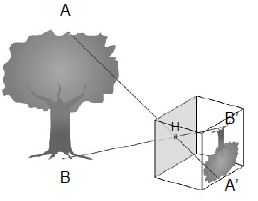 Similarly a ray of light, starting from point B along BH, on passing through pin hole strikes the screen at . Thus, the rays of light starting in between A and B will strike the screen between points and , thereby forming a small diminished image of object AB.
4. Nature of image formed by a Pin Hole Camera:
The image formed by it is real and inverted image. The size of the image depends on the position of the object.

7. Advantages of Pin Hole Camera
1. It does not require any lens and hence, the image is completely free from the defects of lenses.
2. It can take very sharp pictures of still objects.
3. It is cheap and easy to construct and operate.
8. Disadvantages of Pin Hole Camera
1. The time of exposure is too large and uncertain. Thus, the final image is either over-exposed or underexposed.
2. It cannot take pictures of the moving objects.
3. It is cumbersome and not easy to operate.
4. If pin hole becomes wider, then the final image is blurred.

5. REFLECTION OF LIGHT
When a beam of light is incident on a surface, a part of it is returned back into the same medium. The part of light which is returned back into the same medium is called the reflected light.
The remaining part of light is absorbed if the surface on which the incident light strikes is opaque or it is partly transmitted and partly absorbed if the surface is transparent.
Reflection: The return of light into the same medium after striking a surface is called reflection.
Reflection of light is the process which enables us to see different objects around us. Luminous bodies are directly seen, but non luminous objects are seen only because they reflect the light incident on them which on entering into our eyes, make them visible. 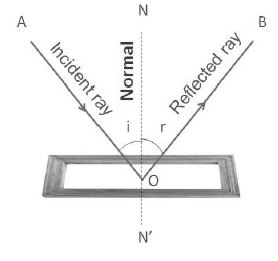 (b) Irregular Reflection or Diffused Reflection:
The phenomenon due to which a parallel beam of light, travelling through some medium, gets reflected in various possible directions, on striking some rough surface is called irregular reflection or diffused reflection.
The reflection which takes places from ground; walls; trees; suspended particles in air; and a variety of other objects, which are not very smooth, is irregular reflection.
Irregular reflection helps in spreading light energy over a vast region and also decreases its intensity. Thus, it helps in the general illumination of places and helps us to see things around us. 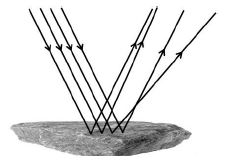 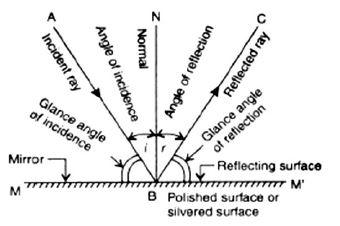 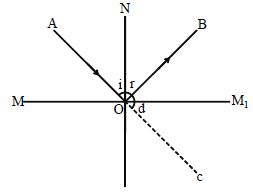 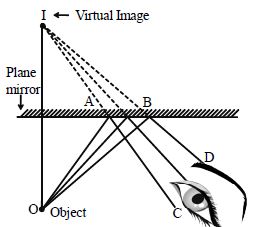 In figure the image ‘I’ of the object ‘O’ is virtual image. The ray of light diverging between OA and OB, after reflection, further diverges along AC and BD respectively.
However, when these diverging rays of light reach the eye, then to the eye they appear to diverge out from point ‘I’. Thus I is virtual image of object ‘O’.
Example: Image of our face in a plane mirror. Virtual images cannot be formed on a screen.
Virtual images are always erect upright. w.r.t object The path of the rays forming a virtual image is shown by dotted lines.
b) Real Image: When the rays of light, diverging from an object point, after reflection or refraction actually converge at some other point then that point is real image of that object.
In figure the ray of light diverging from point A, after reflection from the concave mirror actually converge at the point . Thus, A1 is the real image of the point A. 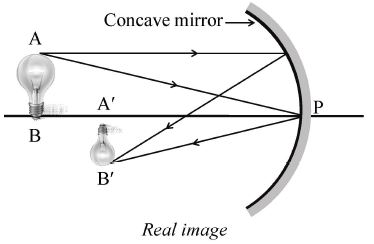 Example: Motion and still pictures projected on the screen in a cinema hall are real images.
Real images are always inverted (upside down) w.r.t object . Real images and the path of the rays which form them are shown by continuous lines.
DISTINCTION BETWEEN REAL IMAGE AND VIRTUAL IMAGE 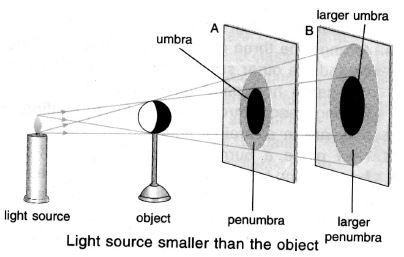 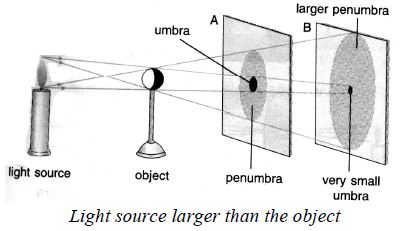 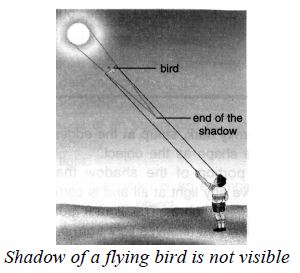 Eclipses
Eclipses are examples of the formation of shadows in the universe. The earth and the moon are opaque, non–luminous bodies and the sun is a luminous body. The earth and the moon cast their shadows leading to the phenomena of eclipses. At times, the sun, the earth and the moon come to lie in a straight line. The object in between casts a shadow and causes an eclipse. There are two kinds of eclipses, the lunar and solar eclipse.
Lunar Eclipse
The lunar eclipse occurs when the sun, earth and moon are in a straight line, with the earth in between the sun and the moon. The shadow of the earth is cast on the moon. If the moon is in the umbra cone of the earth, it will not be visible because the moon is non–luminous and since it does not receive any light from the sun, it does not reflect any light. This is called a total lunar eclipse.

Was this article helpful to you? Yes 14 No 2