Physics is inherently a science of measurement.

The act of measuring a quantity required is called measurement.

III. Non-standard units
In early days, people used to measure length with the help of parts of body, such as outstretched palm, foot, arm or cubit. 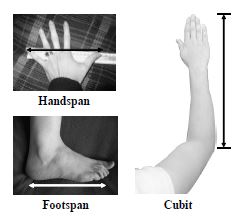 Such units cannot serve as standard for measuring length because they are going to be different for different people.

There are mainly ‘3’ system of units to measure length, mass and time.

M.K.S system is also know n as Standard International (S.I) system. The details of which you will be studying in higher classes.

Length is the distance between two fixed points.

I. Least count
The smallest quantity that can be measured accurately using any instrument is known as least count of that instrument.

Measurement of curved lines can be done by using a piece of thread.

Thickness of coin by a centimeter scale or millimetre scale is

Thickness of one coin =

Diameter of a wire

The diameter of spherical object can be measured by placing the object between two wooden blocks as shown in the figure. 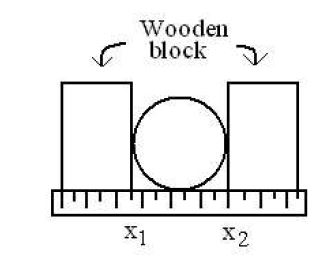 The diameter of spherical object =

II. Measurement of very large distances
Distance between earth and moon, or earth and sun can’t be done by using conventional units. Such large distances are expressed using following units.
III. Astronomical unit(A.U)
It is the average distance of the earth from the sun.
1 A.U = 1.496 × m
4. MEASUREMENT OF AREA
Area is the amount of surface occupied by an object or a place. Area of a regular surface like a rectangle or a square can be calculated by using formula knowing its length and breadth (or) length of its side.
Area = length × breadth
The SI unit of area is or square metre.
The other units of area are etc.
Larger areas are measured in ‘acre’ and ‘hectare’. (1acre = 100, 1hectare = 100acre).
For measuring bigger areas, such as area of fields or towns hectare is used.
Area of an irregular surface is measured by using a graph paper as there is no formula for finding area of irregular shapes.
5. MEASUREMENT OF VOLUME
The space occupied by a substance (solid, liquid or gas) is called volume.
volume = length × breadth × height
S.I unit of volume – (cubic meter)
C.G.S unit of volume – (centimeter cube)
Volume of regular shape like a cuboid = length × breadth × height
Volume of irregular bodies cannot be measured by formula. They can be calculated by using measuring jar and overflow jar .
Measurement of volume of liquid
To measure the volume of liquids measuring jars can be used directly.
Different Measuring jars
Measuring jar: It is used to measure the liquids of desired quantity.
Measuring Vessels: They are used to measure volume of liquids like milk and oil.
Pipette: It is used in laboratories to take specific volume of liquid.
Burette: It is also used in laboratories to extract required volume of liquid for the experiment.

6. MEASUREMENT OF MASS
Mass is the amount of matter contained in a body. Mass is measured using devices like common balance, physical balance etc.,
SI unit of mass is kg.
The other units of mass are milligram(mg), gram(g), tonne, quintal.
1mg =
1quintal = 100 kg
1tonne = 1000 kg

8. MOTION
Mechanics is the branch of physics that focuses on the motion of objects and the forces that cause the motion to change. There are two branches of Mechanics: Kinematics and Dynamics. The word kinematics comes from the Greek word “Kinema” meaning motion. The word dynamics comes from the Greek word “dynamis” meaning power.
Kinematics deals with the concepts that are needed to describe motion without any reference to forces or the cause of the motion. The goal of study of kinematics is to develop sophisticated mental models, which serve us in describing the motion of real world objects.
Dynamics deals with the relation between the forces and the motion. The motion of objects can be described by words such as distance, displacement, speed, velocity and acceleration. Before we witness the concepts of kinematics, let’s review some basic concepts.

II. Motion
An object is said to be in motion if it changes its position from one place to another. In other words, the movement of an object is known as the motion of the object.
Example: A vehicle has to be driven.
Rain drops fall due to gravitational pull.

10. TYPES OF MOTION
All bodies in motion do not move the same way. For example, a car moves straight along the road; a spinning top spins round and round; the strings of a sitar move up and down and the pendulum of a clock moves sideways in either direction. The motion of bodies is classified as under:
I. Translatory motion
The motion in which all the particles of a body move through the same distance in the same time is called translatory motion.
Examples
i) A car or a train moving along a road or track.
ii) A ball rolling on the ground.
iii) Firing of a bullet from a gun.
iv) A stone hurled from a catapult.
vii) An apple falling from a tree.
viii) A striker on the carom board going straight to hit the coin, etc.
There are two kinds of translatory motion:
(a) Rectilinear motion and
(b) Curvilinear motion.
a) Rectilinear motion
When an object moves along a straight line like a ball dropped from a height, the motion described by the body is called rectilinear motion.
Examples:
i) A ball rolling on the ground.
ii) A car moving on a straight road.
iii) A stone falling freely from the roof of a building.
iv) A coin moving over a carom board.
b) Curvilinear motion
When a body moves along a curved path, the motion described by the body is called curvilinear motion.
Examples:
i) A stone thrown by a boy from a height.
ii) A car moving along a curved path.
iii) A javelin or shot-put thrown by an athlete.
iv) A ball thrown upward at an angle.
v) A car or train moving along a curved road or track are all examples of curvilinear motion.
II. Rotational motion
A motion in which a body moves about a fixed axis without changing its position is called rotational motion.
Examples:
i) The motion of the blades of a fan.
ii) The wheel of a sewing machine.
iii) The motion of a giant wheel.
iv) A spinning top
v) A spinning wheel (charkha)
vi) A rotating potter’s wheel
Combination of translatory and rotational motion
In some cases, the motion of rotation and the motion of translation occur at the same time. When a drill cuts through a metal piece, it performs the motion of translation as well as the motion of rotation at the same time. Other examples of this kind of motion are the wheels of a moving bicycle or a car, the ball delivered by a spin bowler. 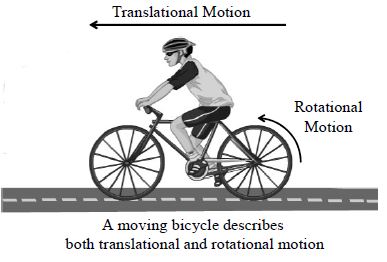 COMPARISON OF ROTATIONAL AND CIRCULAR MOTIONS

IV. Oscillatory motion
A motion in which the body as a whole moves to-and-fro about its mean position is called oscillatory motion.
Examples :
i) The movement of a swing.
ii) The oscillation of pendulum of a clock.
iii) The needle of a sewing machine moving up and down.
iv) The piston of a motor car, the pressing cylinder of a juice machine, the piston of a spray pump etc.

V. Vibratory motion
It is another kind of oscillatory motion in which the body does not move as a whole i.e. the entire object does not move but undergoes change in shape or size.
Examples:
i) When you pluck a string of a guitar or sitar, it vibrates to and fro about its position of rest and produces music.
ii) When you strike the membrane of a drum, it vibrates up and down about its position of rest and produces sound. These vibrations are like the oscillations of a pendulum, except that they are faster. There is another difference. The pendulum swings freely, while the string of a musical instrument is fixed at two ends, and the membrane of a drum is fixed around the circumference of the drum.
iii) During breathing, when our chest expands or contracts, the motion is vibratory in nature; all the points on the chest do not move out equally.

VI. Periodic motion
A motion which repeats itself at regular intervals of time is called periodic motion.
Examples:
i) The motion of the earth round the sun is periodic.
ii) The swinging pendulum of a wall clock.
iii) The needle of a sewing machine running at constant speed.
iv) The heartbeat of a normal human being.
v) The motion of a swing.
vi) The movement of the lungs during breathing.

VII. Random motion
A body which has a particular motion that suddenly changes to another kind of motion is said to have random motion. In other words, the motion without any sequence or direction is random motion.
Examples :
1) A buzzing bee.
2) A football player on the field.
3) The motion of a hockey ball during a game.
4) The flying motion of a sparrow.
5) A monkey performing antics on a tree.

VIII. Multiple motion
Sometimes an object manifests two or more types of motion at the same time. Such motion is called multiple motion.
Examples:
i) When a spin bowler delivers a ball, the ball has a motion of spin (rotatory motion)while it moves towards the batsman (translatory motion).

Was this article helpful to you? Yes 11 No 1