1. INTRODUCTION
We use electricity for many purposes to make our tasks easier. For example, we us electricity to operate pumps that lift water from wells or from ground level to the roof top tank. We also use of electricity for lighting. Electricity makes it possible to light our homes, roads, offices, markets and factories even after sunset. This helps us to continue working at night. A power station provides us with electricity. However, the supply of electricity may fail or it may not be available at some places. In such situations, a torch is sometimes used for providing light. A torch has a bulb that lights up when it is switched on. Have you ever thought from where does the torch get electricity from?

4. ELECTRIC CELL
Electricity to the bulb in a torch is provided by the electric cell. Electric cells are also used in alarm clocks, wristwatches, transistor radios, cameras and many other devices. An electric cell has a small metal cap on one side and a metal disc on the other side.

The thin wire that gives off light is called the filament of the bulb. The filament is fixed to two thicker wires, which also provide support to it. . One of these thick wires is connected to the metal case at the base of the bulb. The other thick wire is connected to the metal tip at the centre of the base. The base of the bulb and the metal tip of the base are the two terminals of the bulb. These two terminals are fixed in such a way that they do not touch each other. The electric bulbs used at home also have a similar design. Thus, both the electric cell and the bulb have two terminals each.
Battery: A combination of two or more cells is called a battery.
Button Cells: It is also a dry cells but are small in size and are used in calculators, wrist watches, etc.
Storage Cells: A car battery or batteries being used in buses & trucks are combination of 6 or more cells inside. They can be recharged with the help of an electric charger & used again and again. For this purpose these batteries are also called accumulators.

5. POWER HOUSES
• For producing a large amount of electrical energy, big power houses are constructed. In these energy of flowing water or the energy of steam is converted into electrical energy.
• Energy generated in power houses is carried by electric cables to the cities and villages.
• When electric supply fails due to some reason, then electric generators provide electric current. In these diesel engine rotates the dynamo and converts the mechanical energy into electric energy.
Solar Cell: Solar cells are specially designed cells having solar panels.
• Solar panels collect solar energy from sun and converts this solar energy into electrical energy.
• This energy is used either directly or stored in an accumulator.
Working of Torchlight: The source of energy for the torch are the electric cells inside the torch.
• Small torches are with a single cell inside, while most torches have two or more cells.
• When switched on , the metal strip inside the torch moves ahead and it touches the base of the reflector which holds the bulb. As soon as it makes contact with the reflector, the circuit is completed and the bulb lights up.
• When switched off, the metal strip is pulled back. The contact of metal strip with the reflector is broken i.e., circuit is broken.

6. ELECTRIC CIRCUIT
An electric cell or dry cell is the source of energy for the bulb to glow and warm up. Let us now learn the way in which this electric energy is made available to the bulb in the torch.
Making of a simple Electric Circuit
Step 1
Take out the bulb from bulb from a torch. Examine the bulb carefully.
The bulb is a small globe of thin glass enclosing a coiled filament supported on two thick wires. One of these thick wires is connected to the metal casing around the base of the bulb. The other wire is connected to the metal tip at the base. The metal casing and the metal tip at the base are the two terminals of the bulb. 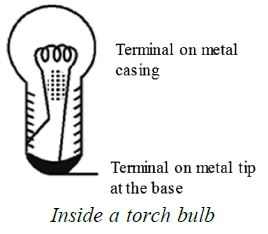 Step 3
Connect the two free ends of the wires from the bulb or the bulb holder to an electric cell in such a way that one piece of wire is connected to the positive terminals of the cell and the other to the negative terminal of the cell. This may be done with the help of a rubber band or an adhesive tape.
When you have finished with connections, the bulb lights up.
With your finger trace the path of the electricity from the positive ( + ve) terminal on the cell to the negative (–ve) terminal of the cell. It is a roundabout path travelled by electricity.
Closed and Open Circuit 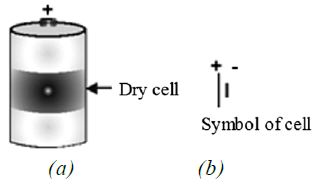 The dry cell has two terminals. The central terminal of the dry cell is called positive terminal. The base of the dry cell (which is made of a metal) is called negative terminal.
The above figure (a) shows the terminals of dry cell. The figure (b) shows the symbol for dry cell.
The long line represents positive terminal of the cell and the small and thick line represents negative terminal of the cell.
For this experiment you need a torch cell; a torch bulb marked 1.5 V, cellotape, a plastic coated 1 metre long copper wire and an old used blade.
Cut the plastic coated copper wire into two halves A and B. Remove plastic coating from each end of the wire such that 1 cm of plastic is removed. Now fix one bare end of each wire A and B to the terminals of 1.5 V bulb with the cellotape. Fix the other end of wire A to the base of cell with the help of cellotape. Now touch the bare end of wire B to the central terminal of cell as shown in figure. What do you observe?
The bulb lights up. This shows that electric current is flowing in wire A and B through the bulb.
The path along which electric current flows is called electric circuit.
Now remove the wire B from the central terminal as shown in Fig. . What do you observe? The bulb does not glow. It is because electric current does not flow, if the path is broken or path is incomplete. 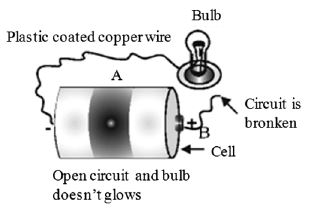 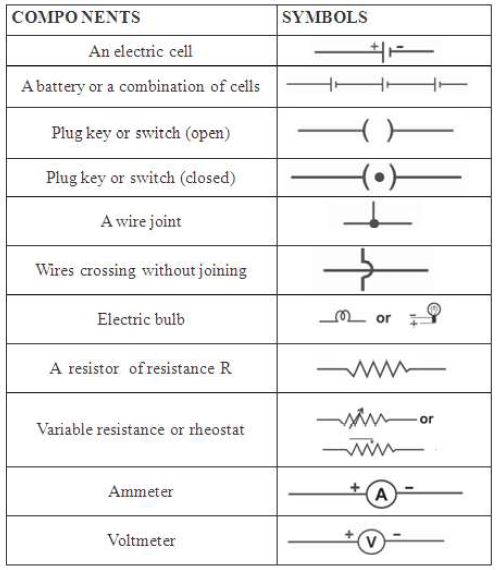 A switch, a simple device to ‘close’ or ‘open’ a circuit: An electric circuit passes through a switch. Switch is a simple device which helps us to close or open the circuit. It helps in saving electricity when not in use. You are always advised to switch ‘off the lights or other gadgets in your home to save electricity.
Ammeter is used to measure the current and voltmeter is used to measure the potential difference.
More details of ammeter and shall be learnt is voltmeter higher classes.

8. CONNECTING ELECTRIC CELLS IN SERIES
Take a dry cell and a torch bulb. Connect the bulb to the cell using copper wires as shown in Fig. .
Observe the intensity- of light. The bulb does not glow brightly.

These three positives and three negatives are connected to the bulb- You will observe that there is no change in the brightness of the bulb!
When cells are connected in parallel, their total electromotive force is the same as that if any one of them.
When cells are connected in series, their electromotive force is equal to the sum of the EMF of all the cells used.
Connect three torch bulbs in series as shown in figure. Connect this to a dry cell and observe that brightness of each of the three bulbs. Now connect one more dry cell in series with he first cell.
Observe the brightness of each of the bulb. Then connect one more dry cell in series with the first two cells. Again observe the bulbs. 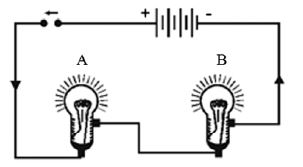 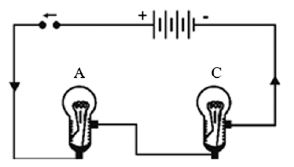 Both the bulbs will stop glowing.
Now remove the bulb B and instead fix a fused bulb C as in the above figure. What is your observation?
Bulb A does not glow. 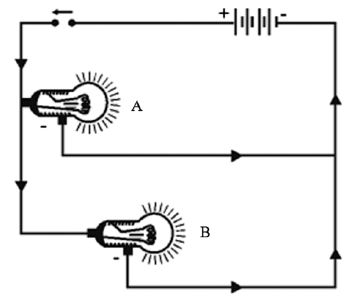 Following are the conclusions from the above investigation
1. In series circuit all the appliances work simultaneously when switch is closed. Conversely, all appliances stop working when switch is open.
2. In series circuit, if any, of the appliances goes out of order, the other appliances stop working.
3. As the bulbs were not glowing very brightly, it can be concluded that in series the appliances do not work to their full capacity.
Now connect the bulbs A and B in parallel, such that they have common positive and common negative terminals as illustrated by Fig. , through a switch and a battery.
Close the switch. What do you observe? Both the bulbs A and B glow very brightly. Now remove the bulb B and instead fix a fused bulb C Fig. . What is your observation? 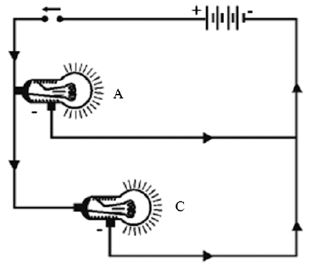 Was this article helpful to you? Yes 1 No 3