1. INTRODUCTION
People have known about magnets since ancient times. The first known magnets were hard black stones called “loadstones “. Throughout the middle Ages many people believed that loadstones had medical powers. During this period, it was discovered that a loadstone would point to the north.

Magnetism is the term used to describe the phenomenon by which forces attract some bodies to each other and to the forces which act between electric currents. Magnetism is an important force in nature that makes possible everyday happenings like talking on the telephone, watching television, listening to taped music and storing data (sound and images) on computer discs. Compasses made with magnets help navigators guide ships safely. Without magnetism, it would not be possible to produce large amounts of electricity and neither could we use electricity to do all the jobs it does. William Gilbert a physician was the first to use the terms magnetic pole and electrical force. It was he who suggested that the Earth’s magnetism could be explained if the Earth was likened to a huge bar magnet. Real progress in understanding magnetism came after the relationship between electricity and magnetism was established by Hans Christian Orested in 1820.

What is Magnetism ?
Just like when the Greeks of the old times discovered the first naturally occurring magnetic stones, or natural magnets, you have been observing a property of matter called magnetism. Magnetism is the force of attraction or repulsion in and around a material.
Magnetism is present is all materials but at such low levels that it is not easily detected. Certain materials such as magnetite, iron, steel, nickel, cobalt and alloys of rare earth elements, exhibit magnetism at levels that are easily detectable.

What is a Magnet ?
A magnet is any piece of material that has the property of attracting iron (or steel). Magnetite, also known as lodestone, is a naturally occurring rock that is a magnet. This natural magnet was first discovered in a region known as magnesia and was named after the area in which it was discovered. Magnetism may be naturally present in a material or the material may be artificially magnetized by various methods. Magnets may be permanent or temporary. After being magnetized, a permanent magnet will retain the properties of magnetism indefinitely. A temporary magnet is a magnet made of soft iron, that is usually easy to magnetize; however, temporary magnets lose most of their magnetic properties when the magnetizing cause is discontinued. Permanent magnets are usually more difficult to magnetize, but they remain magnetized. Materials which can be magnetized are called ferromagnetic materials. We will talk more about making a magnet later on.

2. NATURAL AND ARTIFICIAL MAGNETS
Magnets are four types, viz ..Natural , Artificial , Temporary and Permanent magnets.
Natural Magnets
A substance which possesses the property of attracting small pieces of irons, steel, cobalt, nickel is called a magnet and this property is called attractive property.
The magnets found in nature are called natural magnet. They are found in quite irregular and odd shapes. Example of a natural magnet is a “lodestone”.
When a piece of lodestone is suspended by a fine thread it comes to rest in north-south direction. This property is called directive property. This property was used by sailors to navigate their ships. Hence a natural magnet is also called ‘lodestone or leading stone’ (from old English ‘lad for way). The modern name Magnetite derives its origin from the locality in which the mineral was first found in large quantities, namely, the town of Magnesia, in Asia Minor.
Magnetite is found occurring naturally in many parts of the world. It is black oxide of iron with the chemical formula and is natural magnet. It was magnetite that allowed people to get acquainted with magnetic properties of bodies.
Natural magnets are not magnetically strong enough for practical purposes, Therefore, artificial magnets are required.
Artificial Magnets
Natural magnets like the lodestone do not have very strong attractive or directive properties, but when a piece of steel is stroked (in one direction only) with a lodestone, these properties are developed stronger in it.
A piece of steel or iron to which the properties of a lodestone have been imparted is called an artificial magnet. 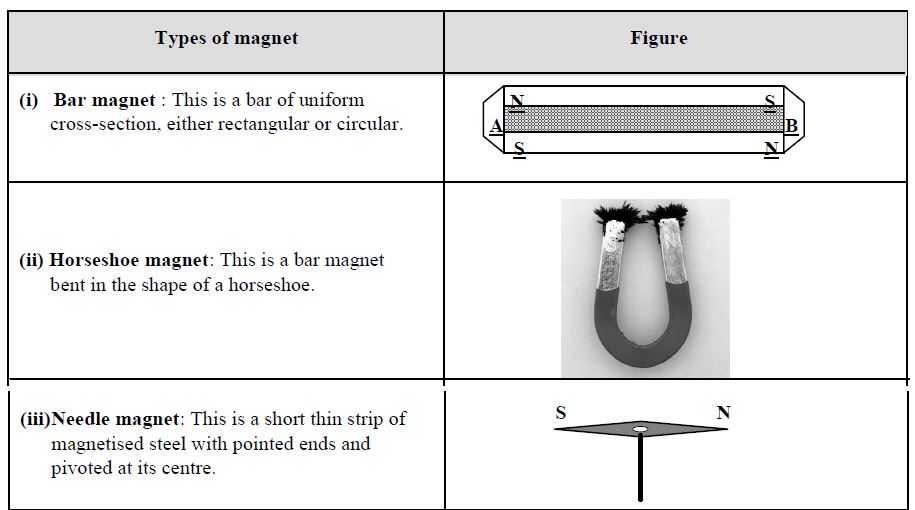 3. PROPERTIES OF A MAGNET
1. It attracts small pieces of iron towards itself
It also attracts pieces of cobalt, nickel and steel. If a bar magnet is rolled in the iron filings, it is observedthat iron filings cling at the ends of the magnet. However, no iron filings cling in the centre. This suggests that the magnetic force of attraction is concentrated near the ends of the magnet.
2. A freely suspended magnet points in north-south direction
Take a bar magnet and suspend it freely from the centre by means of an unspun silk thread. It is observed that it points in the north-south direction. Even if we set the magnet in some other direction, it again resets itself in the north-south direction. The above property of magnet is used in the construction of magnetic compass. It must be noted that a freely suspended magnet does not really point in exact geographic north-south position, but is inclined at a slight angle to it. 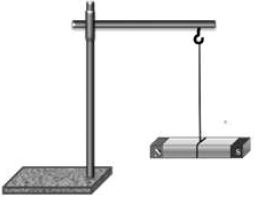 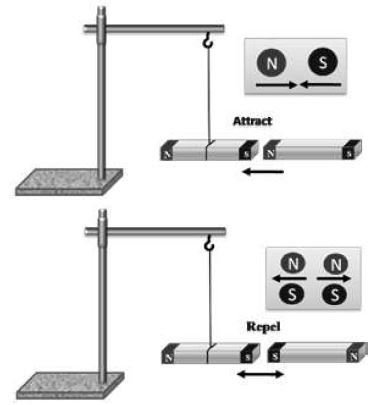 This characteristic of the magnet is made use in determining the polarity of a magnet with the help of another magnet whose polarity is known. Repulsion is the surest test of magnetism. It is because the attraction can be caused between two unlike poles of the two magnets or between the magnet and the magnetic substances (such as iron, cobalt and nickel). How-ever, the repulsion is caused when two similar poles approach each other. Thus, repulsion is the surest test of magnetism.
4. It can magnetize another piece of iron when rubbed several times in one direction)
Take a steel bar AB and place it flat on the table. Rub this steel bar with a bar magnet as shown in figure for about 50 times.
Test the end A of the steel bar by bringing it near the north pole of another freely suspended magnet. It is observed that the north pole of the freely suspended magnet is repelled, proving that the steel piece has been magnetized.

5. Magnetic poles exist in pairs
If a bar magnet is broken into two equal parts, following observations are made:
(i) Each part has attractive as well as directive property, i.e., each part is complete magnet,
(ii) The magnetic strength of each part is half than that of the complete magnet,
(iii) The new magnetic poles are formed where the cut is made on the magnet,
(iv) The nature of magnetic polarity on a given cut is opposite to the polarity on the far end of the magnet.
If the broken pieces are further broken, all the above mentioned observations are noticed till we reach molecular stage.

Magnetic Axis: An imaginary line joining the magnetic north and south poles of a bar magnetic is called its magnetic axis (or) axial line. (XY = magnetic axis)
Equatorial Line: The line passing through the centre of magnet and perpendicular to the axial line is called equatorial line. 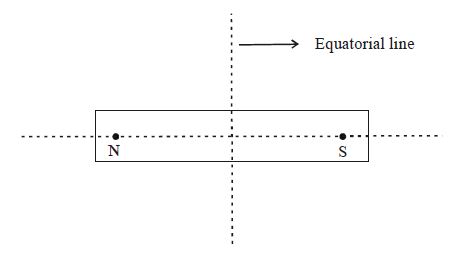 Magnetic Length: The distance between the two poles of a magnet is called magnetic length of magnet.

NS Magnetic length AB = Geometric length
The relation between magnetic length and geometric length is
MAGNETIC LENGTH = GEOMETRIC LENGTH
Magnetic Induction: The phenomenon due to which magnetism is produced in a magnetic substance by the mere presence of a magnet, which is not actually in physically contact with magnet is called magnetic induction. 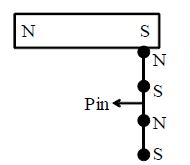 Note: The end of an unmagnetised substance nearer to the pole of inducing magnet acquires opposite polarity, whereas the further end from inducing magnet acquires similar polarity. Magnetic induction precedes magnetic attraction.
Temporary Magnets: The magnets which lose their magnetism as soon as the cause producing them is removed, are called temporary magnets.
Examples: Electromagnets and the magnets made from soft iron are temporary magnets.
ii) Permanent Magnets: The magnets which do not lose their magnetism, when the cause producing them is removed, are called permanent magnets.
Examples: The magnets made from steel, cobalt etc., are permanent magnets.
Note: Soft iron is a temporary magnet whereas Steel is a permanent magnet.
Demagnetisation: The loss of magnetic property of a magnet is called demagnetisation. By heating or by hammering or by rough handling, a magnet loses its property.

Was this article helpful to you? Yes 5 No 3