Layers of Atmosphere
The atmosphere is divided into five layers. It is thickest near the surface and thins out with height until it eventually merges with space.
1. The troposphere is the first layer above the surface and contains half of the Earth’s atmosphere. Weather occurs in this layer.
2. Many jet aircrafts fly in the stratosphere because it is very stable. Also, the ozone layer absorbs harmful rays from the Sun.
3. Meteors or rock fragments burn up in the mesosphere.
4. The thermosphere is a layer with auroras. It is also where the space shuttle orbits.
5. The atmosphere merges into space in the extremely thin exosphere. This is the upper limit of our atmosphere. 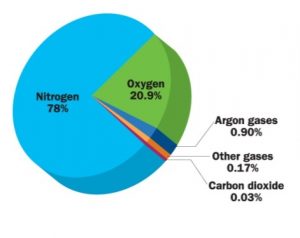 Earthworms come out of the soil, only during heavy rains
Most of the small organisms like earth worms, rodents live inside the soil. They usually live in burrows and holes in the soil. These burrows also make spaces available for air to move in and out of the soil. However, when it rains heavily, water fills up all the spaces occupied by the air in the soil. In this situation, animals living in the soil have to come out for respiration.

Note:
We feel suffocation in a room having burning substance due to accumulation of carbon dioxide gas and less availability of oxygen gas.
Activity to show presence of oxygen, carbon dioxide and nitrogen in air:
For this, take a candle, a glass tumbler and a pan which is filled with some water. Keep the candle upright in the pan and light the candle. Now cover the candle with the glass tumbler. It is observed that the candle extinguishes after some time.

This happens because oxygen in the air inside the glass tumbler is utilised in burning the candle. All the oxygen gets converted into carbon dioxide. Carbon dioxide does not support burning and hence candle stops burning.
Once the candle stops burning, some amount of water is sucked inside the tumbler. This happens because the volume of cabron dioxide is less than the volume of oxygen which was displaced.
It is also seen that a lot of air is still inside the tumbler. A major portion of this air is nothing but nitrogen. Nitrogen too does not support burning.

6. AIR IS NECESSARY FOR COMBUSTION – ACTIVITY

i) Take a glass trough and fill 1/3 of its volume with water.
ii) Add a spoonful of caustic soda (Sodium hydroxide) and few drops of coloured ink to the contents of the trough.
iii) Place a wooden slab or stone in the trough and place a lighted candle on it as shown in the figure.
iv) Invert a wide mouthed glass jar over the burning candle. The candle is put off within few seconds. At the same time the coloured water in the glass jar raises.
v) The supporter of combustion i.e., oxygen in the air, contained in the glass jar was exhausted  and carbon dioxide is released in its    Hence oxygen in the air is useful for combustion.
vi) The carbon dioxide so formed is absorbed by caustic soda solution. The nitrogen which is still available in air does not give support for burning.
vii) As vacuum is created in the glass jar, the coloured water raises in the trough.
viii) However if the glass jar is not placed in an inverted position over the burning candle, the candle goes on burning forever, as air is available continuously.
ix) Hence, we can say that oxygen in air is necessary for burning.

Was this article helpful to you? Yes 26 No 8