1. INTRODUCTION
The basic necessities for human beings are food, shelter and clothing. Let us discuss about clothes and why they are important. Clothes guard our body from external environment. They protect us from insect bite and they make us look good. Depending on the climate of the place people wear different clothes. Clothes are made of different types of materials. For example: Cotton sari is made of cotton, Leather jacket is made of leather, Sweater is made of wool, etc.

2.HISTORY OF CLOTHING
In the beginning of civilization, people used bark, leaves and animal fur as clothes. When people settled down as farmers, they used woven vines and animal fleece as clothes. In the next stage, flax and cotton were woven into clothes. In those times, people just draped the fabric to cover themselves. People started wearing stitched clothes only after the needle was invented. Even today, in older cultures like India, you see people wearing unstitched garments like turbans, saris and dhotis.

A material which is available in the form of thin and continuous strand is called fibre. A pulled and twisted strand of fibre used to make fibre is called as yarn. Fabrics are made up of yarns and yarn is made up of fibres. Loom is used to make fabric from yarn. Loom may be power loom or handloom. Fibres is used to obtain cloths. Two yarns are used together one in length wise while other is cross wise. The crosswise yarn is called as weft. 4. COTTON FIBRES
In India, cotton is cultivated mainly in Maharashtra, Gujarat, Haryana, Punjab, Rajasthan, Tamil Nadu and Madhya Pradesh.
Cultivation Of Cotton
Cotton was first produced in India, from where it spread to different part of world. Cotton is cultivated in black clayey soil. It needs warm climate. The sowing of cotton crop is done in early spring. Cotton plants are bushy and about 1-2 meters ( around 6 feets) tall. The plants start flowering in about 60 days and give whitish – yellow flowers. The flowers turn reddish in a few days. Flowers slowly grow into spherical walnut-like structures. These are called cotton balls. Fibres of cotton grow on these seeds. After some time green cotton balls turn brown. At maturity, the cotton bolls burst open and the white cotton fibre can be seen.
Ginning
The cotton picked up from the plants has seeds in it. The process of removing cotton seeds from pods is called ginning. Ginning was traditionally done by hand. Now-a-days, machines are used in ginning.
Note:

Spinning
The process of making yarn from fibre is called spinning. The raw cotton is supplied to industry .To decrease the volume of cotton is pressed using machine. The pressed cotton bundle is called as bale. 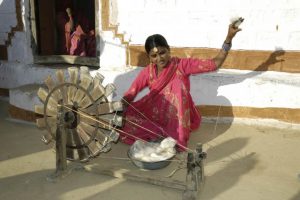 Steps In Making Cotton Yarn
a. The raw cotton is loosened and cleaned; to remove straw and dried leaves.
b. The cleaned cotton is then fed into a machine. The cotton fibre are combed, straightened and converted into a rope like structure called sliver.
c. The sliver of cotton fibre is converted into yarn by spinning using machines.
Note:
The process of making yarn from fibre is called as reeling. Yarn is used to obtain fibre.
Unspun cotton is used in pillow and mattress to provide soft surface for sleeping.
Weaving
The process of arranging two sets of yarn together to make a fabric is called weaving. Wrap and weft are two yarn used during weaving of clothes using loom in length and crosswise respectively. The big reels of yarn are called bobbins. These bobbins are used for weaving the cloth. Cloth is woven on looms. After that they bleached and dyed to give a finish.
Knitting
Knitting can be done by hand and machine. Just two yarns are used in knitting, while more than two yarns are used in weaving. Sweater, socks, scarf and caps are knitted from the wool. 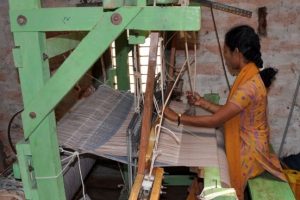 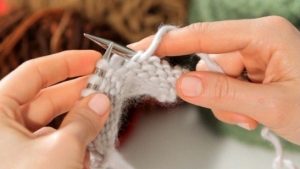 Jute fibre comes from jute plants, which are mainly grown in places that have high temperatures and plenty of rainfall. Jute is cultivated during the rainy season. In India, jute is cultivated in West Bengal, Bihar, Andhra Pradesh, Uttar Pradesh, Assam, Chhattisgarh and Tripura.
A Jute Plant 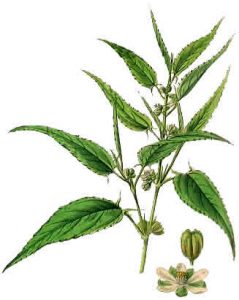 The jute plant is generally harvested when it is in the flowering stage. The stems of jute plants are soaked in water for a few days until they start rotting. Then the fibres are separated by hand from the rotting stems. Once the fibres have been obtained, they are made into yarn by twisting the strands together.

This process of making yarn from fibre is called spinning.
Not just jute, even cotton, silk and other fibres are spun to convert them into yarn. Machines are used for spinning yarn on a large scale. Fabrics like khadi are made by spinning yarn on hand-operated devices like charkhas and taklis.

6. OTHER USEFUL PLANT FIBRES
Coir
Coconut fibre can be woven into fabric called coir. Coir is too rough to be made into garments. It is mostly used to make doormats, carpets and other flooring material.
Silk cotton
Silk cotton is obtained from kapok tree. The fruits of this tree contain fibres. These fibres are light and fluffy.
Silk cotton is used commonly used as stuffing in pillows, sleeping bags and life jackets.
Hemp
Another important plant fibre is hemp. Hemp fibre is obtained from the stems of hemp plant. It is mostly used to make ropes, carpets, clothes and papers and nets. 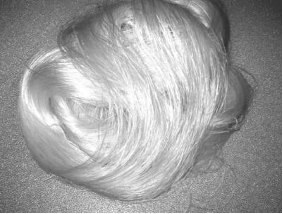 7. WOOL
We get wool from hair of the sheep, goat, rabbit, yak and camel. Wool is used for making warm clothes, such as sweater, cap, shawl, gloves, and blanket, etc. Wool is also used in making carpets and upholstery.

8. SILK
We get silk from silk worm. Silk fiber is obtained from the cocoons of the silk moth. The silk moth lives on the leaves of mulberry plants. There are four stages in the life cycle of silk moth: eggs, larva, pupa and adult.
The larva of the silk moth is called caterpillar. It secretes a sticky fluid fibroin from its salivary gland (silk gland). This sticky fluid forms a long thread. This thread is wrapped around the body of the caterpillar and forms cocoon. After this stage, the larva becomes a pupa and then turns into an adult moth.
Silk is a costly fabric. Silk fiber is used for weaving cloth; especially traditional dresses in India; like sari, kurta, shawl and other wedding clothes. Silk had always been prized for its luster and fine quality. Was this article helpful to you? Yes 79 No 5