1. INTRODUCTION
Nature has endowed the human eye (retina) with the sensitivity to detect electromagnetic waves within a small range of the electromagnetic spectrum. Electromagnetic radiation belonging to this region of the spectrum (wavelength of about 400 nm to 750 nm) is called light. It is mainly through light and the sense of vision that we know and interpret the world around us.
There are two things that we can intuitively mention about light from common experience. First, that it travels with enormous speed and second, that it travels in a straight line. It took some time for people to realise that the speed of light is finite and measurable. Its presently accepted value in vacuum is c = 2.99792458 × 108 m s–1. For many purposes, it suffices to take c = 3 × 108 ms–1. The speed of light in vacuum is the highest speed attainable in nature.
The intuitive notion that light travels in a straight line seems to contradict that light is an electromagnetic wave of wavelength belonging to the visible part of the spectrum. How to reconcile the two facts? The answer is that the wavelength of light is very small compared to the size of ordinary objects that we encounter commonly (generally of the order of a few cm or larger). In this situation, a light wave can be considered to travel from one point to another, along a straight line joining them. The path is called a ray of light, and a bundle of such rays constitutes a beam of light.
In this chapter, we consider the phenomena of reflection, refraction and dispersion of light, using the ray picture of light. Using the basic laws of reflection and refraction, we shall study the image formation by plane and spherical reflecting and refracting surfaces. We then go on to describe the construction and working of some important optical instruments, including the human eye.

Particle Model Of Light
Newton’s fundamental contributions to mathematics, mechanics, and gravitation often blind us to his deep experimental and theoretical study of light. He made pioneering contributions in the field of optics. He further developed the corpuscular model of light proposed by Descartes. It presumes that light energy is concentrated in tiny particles called corpuscles. He further assumed that corpuscles of light were mass less elastic particles. With his understanding of mechanics, he could come up with a simple model of reflection and refraction. It is a common observation that a ball bouncing from a smooth plane surface obeys the laws of reflection. When this is an elastic collision, the magnitude of the velocity remains the same. As the surface is smooth, there is no force acting parallel to the surface, so the component of momentum in this direction also remains the same. Only the component perpendicular to the surface, i.e., the normal component of the momentum, gets reversed in reflection. Newton argued that smooth surfaces like mirrors reflect the corpuscles in a similar manner.
In order to explain the phenomena of refraction, Newton postulated that the speed of the corpuscles was greater in water or glass than in air. However, later on it was discovered that the speed of light is less in water or glass than in air.
In the field of optics, Newton – the experimenter, was greater than Newton – the theorist. He himself observed many phenomena, which were difficult to understand in terms of particle nature of light. For example, the colours observed due to a thin film of oil on water. Property of partial reflection of light is yet another such example. Everyone who has looked into the water in a pond sees image of the face in it, but also sees the bottom of the pond. Newton argued that some of the corpuscles, which fall on the water, get reflected and some get transmitted. But what property could distinguish these two kinds of corpuscles? Newton had to postulate some kind of unpredictable, chance phenomenon, which decided whether an individual corpuscle would be reflected or not. In explaining other phenomena, however, the corpuscles were presumed to behave as if they are identical. Such a dilemma does not occur in the wave picture of light. An incoming wave can be divided into two weaker waves at the boundary between air and water.
2. REFLECTION

When a beam of light is incident on a surface, a part of it is returned back into the same medium. The part of light which is returned back into the same medium is called the reflected light.
The remaining part of light is absorbed if the surface on which the incident light strikes is opaque or it is partly transmitted and partly absorbed if the surface is transparent.
Reflection
The bouncing back of light into the same medium after striking a surface is called reflection.
Reflection of light is the process which enables us to see different objects around us.  Luminous bodies are directly seen, but non luminous objects are seen only because they reflect the light incident on them which on entering into our eyes, make them visible.

The phenomenon due to which a parallel beam of light, travelling through some medium, gets reflected in various possible directions, on striking some rough surface is called irregular reflection or diffused reflection.
The reflection which takes places from ground; walls; trees; suspended particles in air; and a variety of other objects, which are not very smooth, is irregular reflection.
Irregular reflection helps in spreading light energy over a vast region and also decreases its intensity. Thus, it helps in the general illumination of places and helps us to see things around us.
Laws Of Reflection
1. The incident ray, the reflected ray and the normal lie in the same plane, at the point of incidence.
2. The angle of incidence is always equal to the angle of reflection.
Note:
(i) The angle of deviation for a ray incident on a plane mirror is calculated as follows:
d =180 – 2i (or) 180 – 2r where i = angle of incidence, r = angle of reflection
(ii) Glancing of angle (g) is the angle made either by the incident ray or the reflected ray with the mirror.
g = 90 – i  (or) 90 – r or d/2, where d = angle of deviation.
3. SPHERICAL MIRRORS
A spherical mirror whose reflecting surface is curved inwards is called a concave mirror. A spherical mirror whose reflecting surface is curved outwards is called a convex mirror. 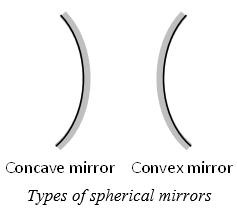 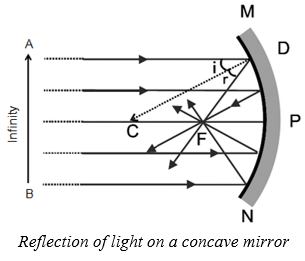 iii) The radius of the sphere of which the reflecting surface of a spherical mirror forms a part, is called the radius of curvature of the mirror. It is represented by the letter R.
iv) Imagine a straight line passing through the pole and the centre of curvature of a spherical mirror.
v) The point of the principal axis where the parallel beam of light meets after reflection is called principal focus. It is represented by F. 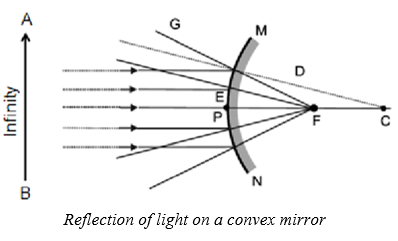 vi) The distance between the principal focus (F) and pole of the mirror (P) is called focal length. It is represented by f.]
vii)The diameter of the reflecting surface of spherical mirror is called its aperture. In the Figure, distance MN represents the aperture.
Note:  R = 2f
4. IMAGES FORMATION BY SPHERICAL MIRRORS
Reflection Of Light By Spherical Mirror
The reflection of light by a spherical mirror takes place according to certain definite rules as follows.
(i) A ray parallel to the principal axis, after reflection, will pass through principal focus in case of a concave mirror or appear to diverge from the principal focus in case of a convex mirror.

Image Formation By Concave Mirror
How about the images formed by spherical mirrors? How can we locate the image formed by a concave mirror for different positions of the object? Are the images real or virtual? Are the images enlarged, diminished or have the same size? The nature, position and size of the image formed by a concave mirror depend on the position of the object in relation to point P, F and C. The image formed is real for some positions of the object. It is found to be a virtual image for a certain other position. The image is either magnified, reduced or has the same size, depending on the position of the object. We can study the formation of image by spherical mirrors by drawing ray diagrams. To construct the ray diagrams, it is more convenient to consider only two rays.
These rays are so chosen that it is easy to know their directions after reflection from the mirror. You may take any two of the rays mentioned in the previous section for locating the image. The intersections of the two reflected rays give the position of image of the point object. The images formed for different positions of the object are shown in Figure  (a to f). 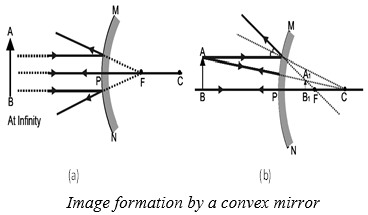 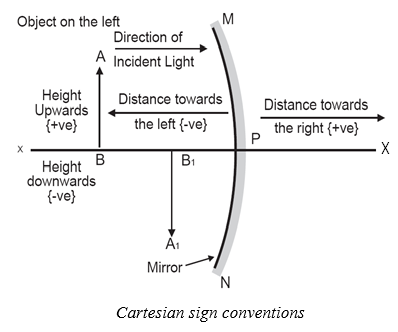 6. RELATION BETWEEN FOCAL LENGTH AND RADIUS OF CURVATURE

Consider a ray of light AM parallel to the principal axis and striking the mirror at M. It is reflected along MF. At M, the angle of reflection is equal to the angle of incidence .
Now, PFM = 2
[   Exterior angle is the sum of interior opposite angles]
Since the mirror under consideration has a small aperture therefore the angle q is small and the arc PM may be regarded as a straight line perpendicular to the principal axis X’X.

The angles (in radian) are so small that tan  and tan 2 can be replaced by  and 2 respectively.

Also, A’B’P’ is similar to ABP

Comparing equation (i) and (ii), we get 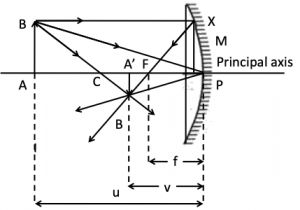 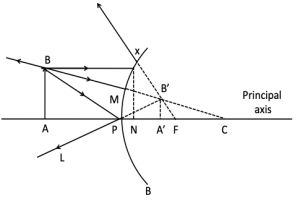 Then,  i.e.
It is same as for a concave mirror.
Hence, we conclude that, the linear magnification produced by a mirror is equal to the ratio of the image distance to the object distance with a minus sign.
Note: For a real image u and v, both are negative, hence m is negative.
For a virtual image u is negative, v is positive, hence m is positive.
Areal Magnification
It is the ratio of the area of the image to the area of the object. It is also called superficial or surface magnification.
Areal magnification =