Q1. Which of the following cannot be charged easily by friction?
(a) A plastic scale
(b)A copper rod
(c) An inflated balloon
(d) A woollen cloth.

Ans. (d) becomes negatively charged while the cloth has a positive charge.

Q3. Write T against true and F against false in the following statements:
(a) Like charges attract each other
(b) A charged glass rod attract a charged plastic straw
(c) Lightning conductor cannot protect a building from lightning
(d) Earthquakes can be predicted in advance

Q4. Sometimes, a crackling sound is heard while taking off a sweater during winters. Explain.

Ans. A crackling sound is heard while taking off sweater made of synthetic fibre during winters especially when the weather is dry, because, since there is some humidity also present in the atmosphere that charges the synthetic fibres and produces attractive forces that acts between charged particles these particles oppose than detachment and create a crackling sound.

Q5. Explain why a charged body loses its charge if we touch it with our hand.

Ans. When we touches a charged body the total charge is transferred into the earth and it loses its charge.

Q6. Name the scale on which the destructive energy of an earthquake is measured. An earthquake measures 3 on this scale. Would it be recorded by a seismograph? Is it likely to cause much damage?

Ans. The power of an earthquake is expressed in term of its magnitude on a scale called Richter scale.
Yes, it would be recorded by a seismograph. But it is not likely to cause much damage.
The tremors produce waves on the surface of the earth. These are called seismic waves. The waves are recorded by an instrument called the seismograph (Fig. 15.2). The instrument is simply a vibrating rod, or a pendulum, which starts vibrating whenever tremors occur. A pen is attached to the vibrating system and the pen records the seismic waves on a sheet of paper which moves under it. By studying these waves, scientists can construct a complete map of the earthquake, as shown in Fig. 15.3. They can also estimate its power to cause destruction. 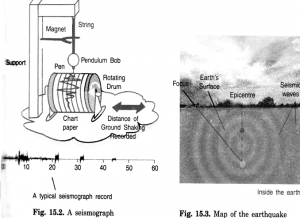 Q7. Suggest three measures to protect ourselves from lightning.

Ans. (i) Hearing thunder without lightning is an alert to rush to a safer place.
(ii) After hearing the last thunder, wait for at least 30 minutes before coming out of the safe place.
(iii) A house or a building is the safe place. If you are travelling by car or by bus. you are safe inside with windows and doors of the vehicle shut.

Q9. Describe with the help of a diagram an instrument which can be used to detect a charged body.

Ans. Electroscope: Electroscope is a device used to detect the presence of charge of an object.
Principle: It works on the principle that like charges repel while unlike charge-attract each other. 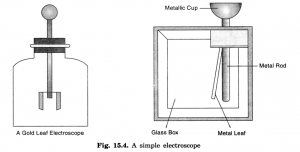 Structure and Working: An electroscope has a metal rod with thin metal strip or leaf attached to it at the bottom. At the top, the rod enters in a cup. The bottom part of the rod and leaf are enclosed in a glass box for protection. When the knob of the electroscope is touched with a charged ebonite or glass rod, the leaves open out or diverge. Extent of divergence depends upon the amount of charge on the electroscope.
Q10. List three states in India where earthquakes are more likely to strike.

Q11. Suppose you are outside your home and an earthquake strikes. What precautions would you take to protect yourself?

Ans. (i) Find a safe place, that will be away from buildings, trees and overhead power lines. Drop to the ground.
(ii) If we are in a sore of vehicle, we do not come out, as the driver to drive slowly to a clear spot. Do not come out till the earthquake stop.

Q12. The weather department has predicted that a thunderstorm is likely to occur on a certain day. Suppose you have to go out on that day. Would you carry an umbrella? Explain.

Ans. Open vehicles, like motorbike, tractor, construction machinery, open cars are not safe. Open fields, tall trees in woods or isolated ones, shelters in a park, elevated places also do not protect from the lightning stroke. Carrying umbrella is not a good idea at all during thunderstorm. If in a forest, take shelter under shorter trees. If no shelter is available, you are in an open field; stay as far away from a tree as it is tall. Stay away from poles or other metal objects. Do not lie on the ground. Instead, squat low to the ground. Place your hands on your knees with your head between the hands. This position will make you the smallest target.