Celestial Objects
Any naturally occurring object in the observable universe is called a celestial body. Stars, planets, satellites, comets, etc. are examples of celestial objects.
7.1. THE MOON
The moon is the only natural satellite of the earth. This is our nearest neighbour in the universe. The moon is at a distance of about 400,000 km from the earth. In terms of size; the earth is 81 times bigger than the moon.
There is no atmosphere on the moon. It is full of craters and mountains. Some of the mountains on the moon are as high as the highest mountains on the earth.
Phases of Moon
The moon does not appear similar on different days rather its shape changes every day. The different shapes of the moon are called the phases of moon. 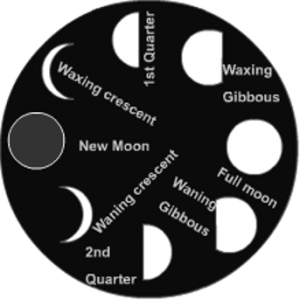 1. New Moon : On the new moon day, no moon is visible in the sky.
2. Waxing Crescent : Within a few days of the new moon day; the moon appears like a crescent. This is called the waxing crescent.
3. 1st Quarter : Within about a week from the new moon day; the moon appears as a semicircle. This is called the 1st quarter moon.
4. Waxing Gibbous : Within about 10 days from the new moon day; the moon appears as a circle with some portion cut off. This is called the waxing gibbous moon.
5. Full Moon : Within about 15 days from the new moon day; the moon appears as a complete circle. This is called the full moon.
6. Waning Phase : The waxing phase of the moon is followed by the waning phase. During this phase; the full moon reduces in size and goes through the waning gibbous, 2nd quarter and waning crescent phases. Within about 29 days from the new moon day; the next lunar month begins with the next new moon.
Reason for Phases of Moon
The periods of rotation and revolution are same in case of the moon. This means that the moon takes the same time in completing one rotation and one revolution. Due to this, only one surface of the moon is visible from the earth.
We also know that the moon does not have its own light rather it reflects the sunlight. So, the sunlit portion of the moon is visible to us. When the moon, the earth and the sun are in a straight line and the earth is between the other two; we are able to see the full moon. On the other hand, when the moon is in between the earth and the sun; we are able to see the new moon, i.e. the whole surface of the moon appears in dark.
7.2. THE STAR
A star is a huge celestial body. Stars produce heat and light because they are full of very hot gases. The sun is the nearest star from us. It is at a distance of about 150,000,000 (one hundred fifty million) kilometer from us. The next nearest star from us is Alpha Centauri. This is about 40,000,000,000,000 (forty trillion) km from us.
1. Light Year : The interstellar distances or intergalactic distances are too big to be easily expressed in terms of kilometers. Hence, we need a more convenient unit to express them. A light year is the distance travelled by light in one year. Distances of stars are usually expressed in terms of light years.
The sunlight takes about 8 minutes to travel from the sun to the earth. This implies that the sun is at a distance of 8 light minute from us. Alpha Centauri is 4.3 light years away from us.
2. Astronomical Unit : The distance between the sun and the earth is called one astronomical unit (AU). This unit of distance makes it easy to express the distance of different planets from the sun.
Do you know why the stars are not visible during the day? In fact, the sunlight is so bright during the day that we are unable to see the stars. This is similar to the blinding effect of the headlights of a car. When the headlights of a car fall on your eyes, you are unable to see anything else.
Apparent Movement of Stars, Sun and the Moon
All the celestial bodies appear to move from east to west. This happens because the earth rotates from west to east. When you are sitting in a moving train; the objects on the platform appear to be moving in the opposite direction. The same illusion happens to show the apparent movement of the celestial bodies.
Pole Star
While other stars appear to move with gradual progress of night, the pole star remains fixed at its position. This happens because the pole star is in line with the axis of the earth. The pole star appears in the northern sky. It is only visible from the northern hemisphere. However, the fixed position of the pole star has helped humans since ages. Sailors and travelers used the pole star to find way when they had to travel during night. 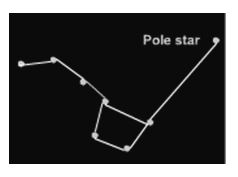 7.3. CONSTELLATION
A group of stars which resembles certain shape is called a constellation. Human beings have an innate ability to recognize shapes and faces even in formless things; like clouds, smoke, etc. This ability of human beings has given rise to various constellations. Different constellations may have different names in various cultures. There are twelve signs of zodiac, viz. Aries, Taurus, Gemini, Cancer, Virgo, Leo, Libra, Scorpio, Capricorn, Sagittarius, Aquarius and Pisces. There are numerous other constellations, e.g. Great Bear, Cassiopeia, Ursa Minor, Orion, etc. 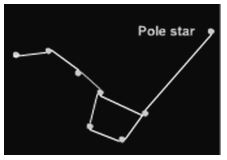 Great Bear : This is also known as Ursa Major and Big Dipper. It resembles the shape of a ladle. The four stars which appear as four vertices of a quadrilateral make the bowl of the ladle and the remaining three stars make the handle of the ladle. Ursa Major appears in the northern sky. The pole star is in line with last two stars of the quadrilateral. Since this constellation appears quite close to the pole star, it looks as if revolving around the pole star.
Orion: Orion is also called the Hunter. The three prominent stars in this constellation mark the belt of the hunter. An elaborate structure shows a man with a club and a shield. This constellation is visible in the southern sky and this can be easily seen during summer months in India.
7.4. THE SOLAR SYSTEM
The solar system is made up of the sun, its planets, satellites, asteroids, comets, dwarf planets, etc. All other members of the solar system keep on revolving around the sun. This is possible because of the gravitational attraction between the sun and these bodies. The solar system is 4.6 billion years old. 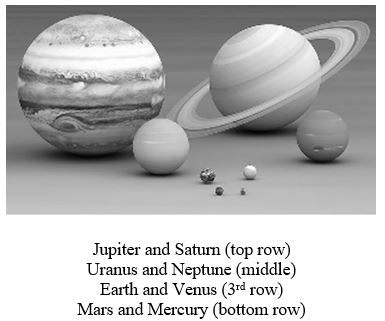 Different members of the solar system are as follows.
The Sun : The sun is the centre of the solar system. The sun is a huge store of heat and light energy. The sun is mainly composed of hydrogen gas. The hydrogen gas in the sun keeps on changing to helium gas and this process releases huge amount of energy. This is like thousands of atom bombs working together.
Planet : A celestial body which revolves around a star is called a planet. There are eight planets in the solar system, viz. Mercury, Venus, Earth, Mars, Jupiter, Saturn, Uranus and Neptune.
Satellite : A celestial body which revolves around a planet is called a satellite. Mercury and Venus do not have known satellites. Jupiter has the largest number of known satellites.
Mercury : This is the smallest planet in the solar system and is nearest to the sun. It is at a distance of 0.4 AU from the sun. This is so close to the sun that it cannot be seen without a powerful telescope.
Venus : Venus is at a distance of 0.7 AU from the sun. This planet is almost of the same size as the earth. Venus is the hottest planet on the earth. After moon; this is the brightest object in the night sky. Venus is visible in early evening during the summer months and in early morning during winters. Due to this, Venus is also called the morning and evening star.
Earth : Earth is the only planet where life is known to exist. According to scientists; earth is at a perfect distance from the sun and hence it has the right combination of gases, materials and temperature to support life. A major portion of the earth’s surface is covered with water and hence it appears blue from the space. Due to this; earth is also called the BLUE PLANET.
Mars : Mars is at a distance of 1.5AU from the sun. Mars appears red because of the presence of iron oxide on its surface. Hence, it is also known as the RED PLANET. Deimos and Phobos are the two natural satellites of mars.
The four planets before the asteroid belt are called rocky planets or TERRESTRIAL PLANETS because they are made of rocks. The four remaining planets which are after the asteroid belt are called GASEOUS GIANTS because they are mainly composed of gases.
Jupiter : Jupiter is at a distance of 5.2 AU from the sun. This is the largest planet in the solar system. Jupiter is 1300 times the size of the earth. But because of its lower density; it is just 388 times the mass of the earth. There are 67 known satellites of Jupiter.
Saturn : Saturn is at a distance of 9.5 AU from the sun. Saturn is famous for its rings. The rings around this planet are composed of rocks, gases and vapours. These rings can be seen through a telescope. There are 62 known satellites of Saturn. The density of Saturn is so low that it can float on water.
Uranus : Uranus is at a distance of 19.2 AU from the sun. Uranus rotates from east to west; like Venus. The axis of Uranus is slightly tilted on its orbit. Due to this, Uranus appears to be rolling on its sides. There are 27 known satellites of Uranus.
Neptune : Neptune is at a distance of 30 AU from the sun. There are 14 known satellites of Neptune. This is the farthest planet from the sun.
Asteroid Belt : The asteroid belt is present between the orbits of Mars and Jupiter. This belt extends between 2.3 and 3.3 AU from the sun. Asteroids are made up of rocks, metallic minerals and some ice. They are remnants of formation of the solar system.
Comet : A comet is a celestial body which revolves around the sun in a highly elliptical path. When a comet passes from near the earth, it becomes visible to us. Halley’s Comet and Hale Bopp are some of the famous comets. Halley’s Comet appears after every 76 years. It appeared last time in 1986 and is expected to appear again in 2062.
Meteor : When a small object from the space reaches the atmosphere of the earth; it enters at a very high speed. The high speed creates so much friction that the object burns off before reaching the earth. Such objects are called meteors. They are visible as shooting stars in the night sky. Sometimes, an object can be too big to be completely destroyed by burning. Such objects reach the surface of the earth and are called meteorites. A meteorite can cause huge damage to the earth; like destroying a huge population of living beings.
Artificial Satellites
The man-made satellites are called artificial satellites. These satellites are made for various purposes; like remote sensing, telecommunication, defence, etc. Data from the satellites is utilised by meteorologists to make predictions about weather. Communication satellites help in working of mobile phones, television, etc. Global Positioning System (GPS) works because of these satellites.