We can also write the same problem as

Here, the digits are denoted by the letters of the English alphabet and only one digit is denoted by one letter.
For example, let us try to find the value of A in the following example.

Here, we add a digit three times and get the same digit at the units place.
Such digits are 0 and 5.
If we take A as 0, then the addition of three 0s equals 0. However, we cannot get any number in the tens place. In the problem, we can see that the sum has 1 in its tens place. Let us now take the digit 5 as the value of A.
If A = 5, then

This gives us the correct product, as given in the puzzle.
Hence, the answer is A = 5.
(iii) We have

This can only be possible if P = 0.
Since P and Q are different numbers, this answer is not acceptable.
Let us now take Q = 2.
On doing so, the puzzle becomes

However, 148 × 6 = 888
This cannot be our answer because 148 is a three-digit number. Replace A, B, C by suitable numerals.
16.5. TESTS OF DIVISIBILITY
Hotel Grand Mansion has 432 rooms and 10 floors. Surbhi, who went to the hotel for the first time with her sister Shweta, was quite amazed by the numbers. She asked Shweta if she could tell whether each of the floors had the same number of rooms. Shweta replied that this is not possible as 432 is not exactly divisible by 10.
Surbhi wanted to check if what Shweta said was true. She quickly divided the numbers as 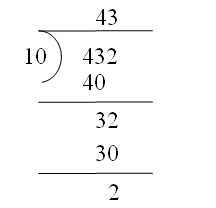 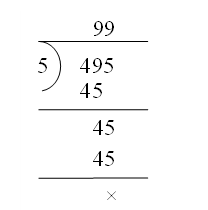 Ashish said that when 495 is divided by 5, the remainder is 0. Hence, 495 is divisible by 5.
We can see that although both Ashish and Dinesh gave the same answer, Ashish took more time to give the answer.
Dinesh used the divisibility rule of 5. This rule saved him the time that he would have otherwise used in actual division.
The rule to check whether a number is divisible or not is as follows : 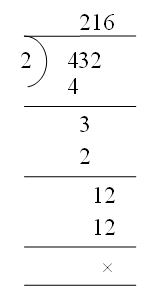 Although he verified what his friend had said, Nikhil was amazed at Ashok’s quick calculation. He asked Ashok how he did it.
Ashok said he used a trick to check the divisibility of 432 by 2.
Ashok used the following rule : 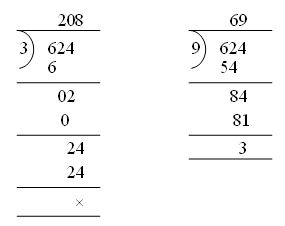 Although Shikhar and Mayank gave the same answer, Mayank took very little time to give the answer, while Shikhar had to perform the division.
Mayank used two rules of divisibility to get the answer. These can be stated as follows :