Graphs are the visual form of a numerical data and drawn to understand the data easily, quickly and clearly. In earlier classes, we have represented the data through various kinds of graphs, namely Pictograph, bar graph, pie graph and histogram.

There is also another way of expressing a numerical data in graphical form which is known as line graph
15.2 A LINE GRAPH
A line graph displays data that changes continuously over periods of time. Let us look at the graph as shown in the following figure. 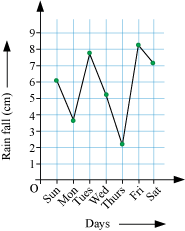 As shown in the given graph, the amount of rainfall received on different days of the week is shown by the points. These consecutive points are joined to form a zig-zag shaped line. This type of graph in the form of a zig-zag shaped line is known as a line graph.
Let us discuss some examples based on the construction of the line graph.
Example 1
The following table represents the number of mobile users (in millions) of two cities A and B in different years. 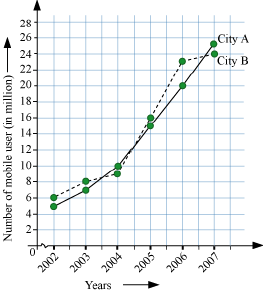 This is the required line graph of mobile users of two cities A and B in different years.
Example 2
Suhana bought a new car in 2001 for $24000. The value of her car depreciated each year as shown in the following table.

Draw its line graph.
Solution
On the horizontal line, let us represent the years and on the vertical line, the value of Suhana’s car in dollars. We mark the points, i.e. the value of car in different years given in the above table. By joining the consecutive marked points, we obtain a graph as shown below. 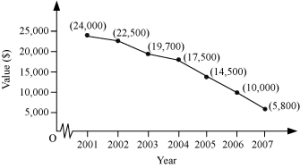 This is the required line graph of the values of Suhana’s car in different years.
Interpretation of Line Graphs
Let us look at the following line graph. 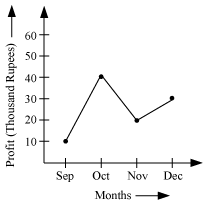 What information does this line graph represent ?
In the given line graph, the last four months of a year are represented along the horizontal axis and the profit corresponding to these months are represented along the vertical axis.
Hence, this line graph tells us the profit for the last four months of a year.
What is the total profit of these four months ?
The profit in month of September, October, November and December are 10 thousand, 40 thousand, 20 thousand, and 30 thousand rupees. Therefore, the total profit for these four months
= (10 + 40 + 20 + 30) thousand rupees
= 100 thousand rupees
= Rs. 1 lac
In which month is the profit maximum ?
The profit in October is Rs. 40 thousand. This amount is the highest as compared to the profit of other months. Therefore, the maximum profit is in October.
In this way, we can interpret information from a line graph by reading and analysing.
Now, let us discuss some examples based on interpretation of line graphs.
Example 3
The following line graph shows the temperature across the first week of March. 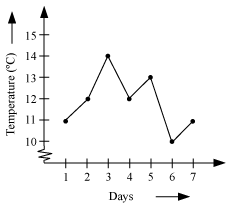 Thus, the average temperature of the week is 11.85°C.
Example 4
The following line graph shows the population in urban and rural areas from2003 to 2007. 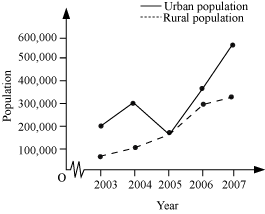 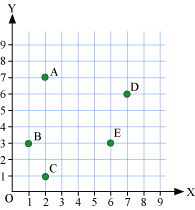 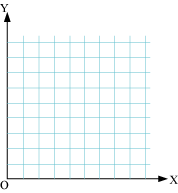 Step 2
Now, we mark the points on both axes. Let us choose the scale for both the axes as 1 unit = 1 cm. 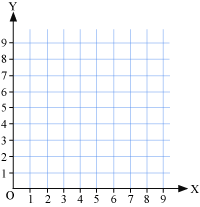 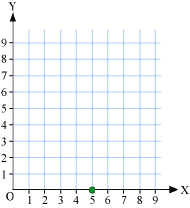 Step 4
From this marked point, we move vertically upwards 3 units and mark this point as shown in the figure. The point marked in this step is the required point P. 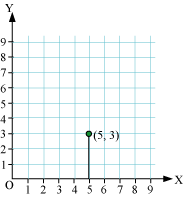 Verification of Points Lying on A Straight Line
Let us consider the following points. P(2, 2), Q(3, 3), R(4, 4), and S(5, 5)
Can we check whether the given points lie on a straight line or not ?
We can do this by first plotting the points on the graph and then joining the points to see if they lie on a straight line.
Let us try to do it for the given points.
On plotting the above points, we obtain the following graph. 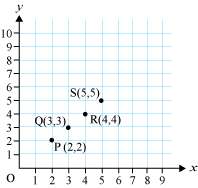 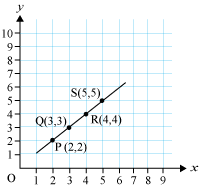 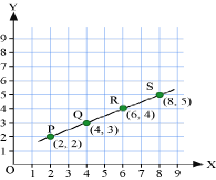 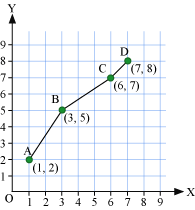 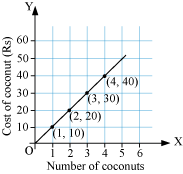 Now, to find the cost of 6 coconuts, we locate 6 on the x-axis and draw a vertical line from there till we reach the graph. Now we move horizontally till we reach the y-axis. We see that the value on the y-axis is 60 as shown in the following graph. 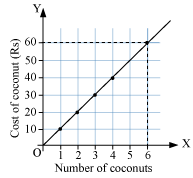 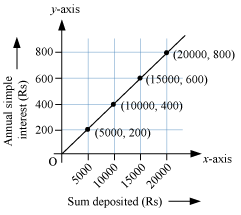 (a) The graph of the given information is a straight line. Thus, the graph is a linear graph.
(b) From the graph, we can see that it passes through the origin.
(c) To find the interest on Rs. 12500 for a year, we will locate the point 12500 on x-axis. From there, we move vertically upwards to meet the graph at a point P. From P, we move horizontally to meet the y-axis as shown below. 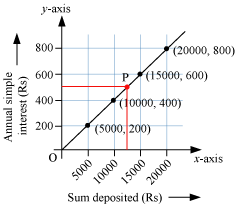 From the above graph, we can see that we will finally be at 500 on the y-axis. Thus, the interest on Rs. 12500 for a year is Rs. 500.
(d) Now, we have to find out the sum deposited to get interest as Rs. 700 per year. To do so, we will locate the point 700 on y-axis. From there, we move horizontally to meet the graph at a point Q. From Q, we move vertically downwards to meet the x-axis as shown below. 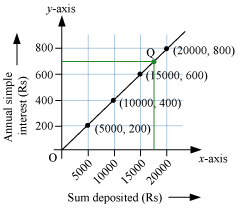 From the above graph, we can see that we will finally be at 17500 on the x-axis. Thus, the interest of Rs. 700 is obtained, when a sum of Rs. 17500 is deposited.
Distance-Time Graphs
Example 13
Ajit can ride a scooter constantly at a speed of 30 km/hour. Draw a time-distance graph for this situation. Use it to find
(i) the time taken by Ajit to ride 75 km.
(ii) the distance covered by Ajit in 3 hours 30 minutes.
Solution

We get a table of values. 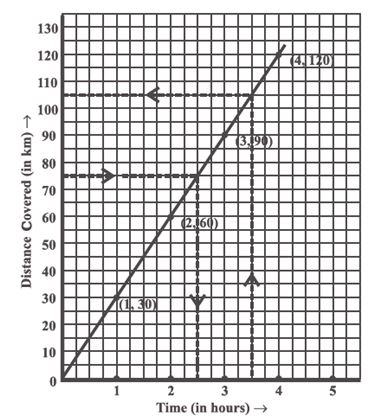