Bigger unit of electric current:
Sometimes the magnitude of the current flowing in a conductor is very large. This large magnitude of current is expressed in bigger units, such as kilo ampere and mega ampere.
1 kilo ampere (kA) = 1000 A = A
1 mega ampere (MA) = 1,000,000 A = A.
Flow of Current
In metals, the moving charges are the electrons constituting the current, while in electrolytes and ionized gases, electrons and positively charged ions are the ions moving charges which constitute current.
The charge on an electron is negative and is coulomb (symbol C).

Instrument by which current measured: Current is measured by an instrument called ammeter.

b) The S.I unit of potential difference is volt(V).

5. SOURCES OF ELECTRICITY
Electrical energy available to us from electric power houses, domestic generators, batteries, dry cells, button cells.
• Dry cell is the most handy source of electricity which is used in torchlights, watches, clocks.
• We make use of button cells in wrist watches, calculators.
• A combination of two or more cells is called a battery.
• A car battery or batteries used in cars or trucks are combination of ‘six’ or more cells.
These batteries once exhausted can be recharged with the help of an electric changer and used again and again. Hence these are called accumulators.
6. EFFECTS OF ELECTRICITY
Electricity is a form of energy, which help us with
• Heating Effect
• Light Effect
• Magnetic Effect
• Chemical Effect
Heating Effect
Here electrical energy is converted into heat energy.
• Heating effect of electric current in a wire is used in appliances like electric iron, electric kettle, geyser, immersion rod, room heater etc.
• Some metals like silver, copper, aluminium are very good conductors of electricity.
• They offer no obstruction (resistance) to the flow of electricity through them.
• In case of an alloy of nickel and chromium (nichrome – an alloy), electric current does not flow easily and it finds obstruction (resistance). This results in heating of the wire.
• Similarly filament (very thin wire) made from a metal called ‘tungsten’ offers great obstruction to the flow of the electric current through it. Thus an electric work is done in overcoming this friction.
This result in loss of energy. This lost energy appears in the form heat energy and light energy. On passing current through it, it gets heated to a high temperature so that it starts glowing.

Fuses
• Fuse is a safety device used for breaking a circuit.
• It works based on the principle of heating effect of electricity.
• We make use of thin wires from soft metals like lead and tin which melts at a low temperature.
• Most common type of fuses are:
• Kitkat fuse made from ceramics (porcelain).
• Miniature circuit breaker (MCB) there are made like a switch.
• Cartridge fuse (Appliance fuse) are generally used in electrical appliances.
Resistance: The friction offered to the passage of electric current by a material is called resistance of material. It is the characteristic property of a conductor.
Unit: Unit is ‘Ohm’ and it is represented by ‘ Ω ’(omega).
Ohm’s Law: The electric current(i) in conductor is directly proportional to the potential difference (V) between its ends at a constant temperature. It is represented by letter R with a symbol

where ‘R’ is proportionality constant called as electrical resistance of the conductor.
Lighting Effect: Electric current while passed through a filament produces heat and glows. The glow emits light 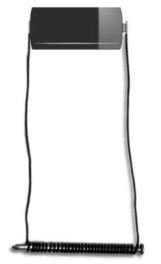 The iron nail attracts two safety pins when wrapped with a coil with more number of turns.
What will happen if the current passing through the coil is switched off?
The iron piece will lose its magnetic effect, i.e., it will stop behaving like a magnet and, thus, will not attract the safety pin. 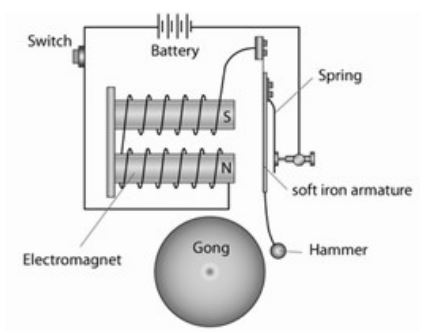 Electric Buzzer: Nowadays, we use electric buzzers and music bells, which work on a principle different from that of the electric bell described here. Buzzers are of different types.
Chemical Effect: This effect is used in electroplating, electrotyping, purifying metals, electrolysis etc.
Here electrical energy can be used to produce chemical reaction in solutions.

7. ELECTRIC CIRCUIT
An electric cell or dry cell is the source of energy for the bulb to glow and warm up. Let us now learn the way in which this electric energy is made available to the bulb in the torch.
Making of a simple electric circuit
Step 1:
Take out the bulb from bulb from a torch. Examine the bulb carefully.
The bulb is a small globe of thin glass enclosing a coiled filament supported on two thick wires. One of these thick wires is connected to the metal casing around the base of the bulb. The other wire is connected to the metal tip at the base. The metal casing and the metal tip at the base are the two terminals of the bulb. 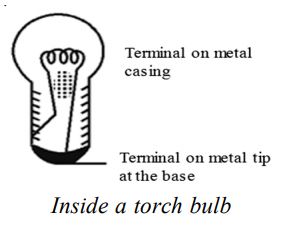 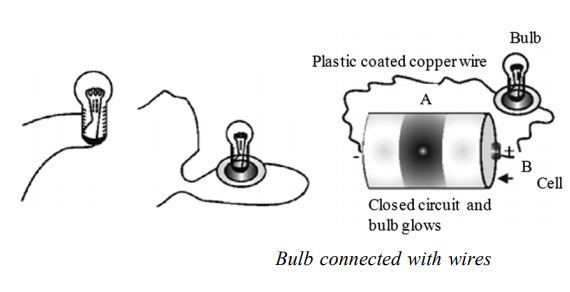 Step 3:
Connect the two free ends of the wires from the bulb or the bulb holder to an electric cell in such a way that one piece of wire is connected to the positive terminals of the cell and the other to the negative terminal of the cell. This may be done with the help of a rubber band or an adhesive tape.
When you have finished with connections, the bulb lights up.
With your finger trace the path of the electricity from the positive ( + ve) terminal on the cell to the negative (–ve) terminal of the cell. It is a roundabout path travelled by electricity. 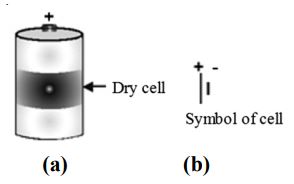 The dry cell has two terminals. The central terminal of the dry cell is called positive terminal. The base of the dry cell (which is made of a metal) is called negative terminal.
The above figure (a) shows the terminals of dry cell. The figure (b) shows the symbol for dry cell.
The long line represents positive terminal of the cell and the small and thick line represents negative terminal of the cell.
For this experiment you need a torch cell; a torch bulb marked 1.5 V, cellotape, a plastic coated 1 metre long copper wire and an old used blade.
Cut the plastic coated copper wire into two halves A and B. Remove plastic coating from each end of the wire such that 1 cm of plastic is removed. Now fix one bare end of each wire A and B to the terminals of 1.5 V bulb with the cellotape. Fix the other end of wire A to the base of cell with the help of cellotape. Now touch the bare end of wire B to the central terminal of cell as shown in figure. What do you observe?
The bulb lights up. This shows that electric current is flowing in wire A and B through the bulb.
The path along which electric current flows is called electric circuit.
Now remove the wire B from the central terminal as shown in figure. What do you observe? The bulb does not glow. It is because electric current does not flow, if the path is broken or path is incomplete. 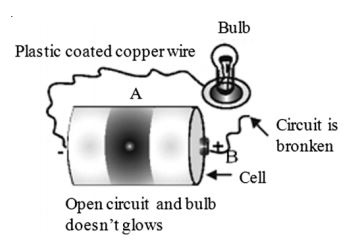 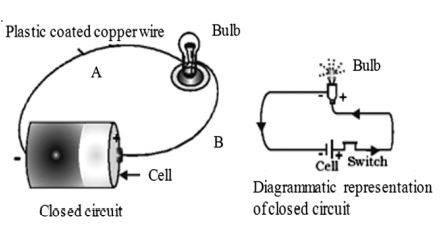 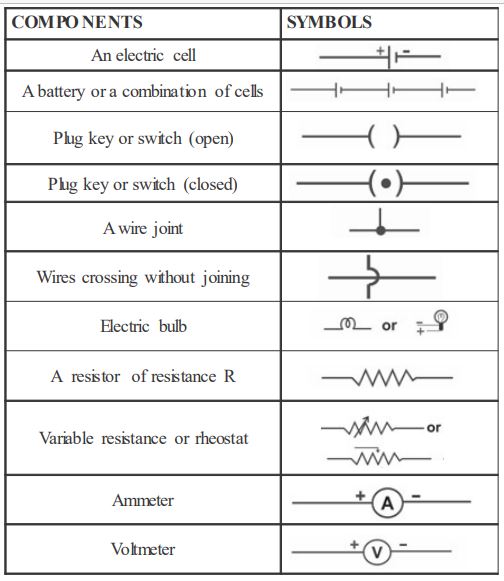 A switch, a simple device to ‘close’ or ‘open’ a circuit: An electric circuit passes through a
switch. Switch is a simple device which helps us to close or open the circuit. It helps in saving electricity
when not in use. You are always advised to switch ‘off the lights or other gadgets in your home to save electricity.
Ammeter is used to measure the current and voltmeter is used to measure the potential difference.
More details of ammeter and voltmeter shall be learnt in higher classes.

9. CONNECTING ELECTRIC CELLS IN SERIES
Take a dry cell and a torch bulb. Connect the bulb to the cell using copper wires as shown in figure. Observe the intensity- of light. The bulb does not glow brightly

These three positives and three negatives are connected to the bulb- You will observe that there is no change in the brightness of the bulb!
When cells are connected in parallel, their total electromotive force is the same as that if any one of them.
When cells are connected in series, their electromotive force is equal to the sum of the EMF of all the cells used.
Connect three torch bulbs in series as shown in figure. Connect this to a dry cell and observe that brightness of each of the three bulbs. Now connect one more dry cell in series with he first cell. Observe the brightness of each of the bulb. Then connect one more dry cell in series with the first two cells. Again observe the bulbs. 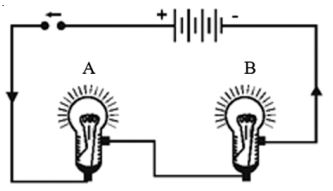 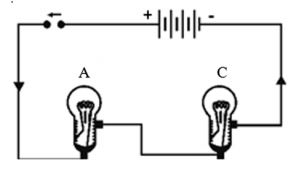 Both the bulbs will stop glowing.
Now remove the bulb B and instead fix a fused bulb C as in the above figure. What is your observation?

Bulb A does not glow. 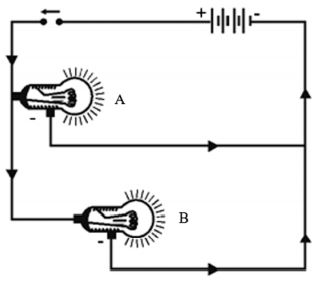 Following are the conclusions from the above investigation
1. In series circuit all the appliances work simultaneously when switch is closed. Conversely, all appliances stop working when switch is open.
2. In series circuit, if any, of the appliances goes out of order, the other appliances stop working.
3. As the bulbs were not glowing very brightly, it can be concluded that in series the appliances do not work to their full capacity.
Now connect the bulbs A and B in parallel, such that they have common positive and common negative terminals as illustrated by Figure , through a switch and a battery.
Close the switch. What do you observe? Both the bulbs A and B glow very brightly. Now remove the bulb B and instead fix a fused bulb C Figure. What is your observation? 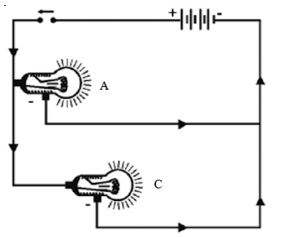 Was this article helpful to you? Yes 17 No 2