Properties of Acids
Some of the characteristic properties of acids are:
• Acids have a sour taste.
• Acids also have the ability to corrode metals such as iron and aluminium.  For this reason, acids are generally stored in glassware.
• Mineral acids such as nitric acid and sulphuric acid can destroy human tissues, clothes, paper, etc.
Thus, one should handle acids with care as they can cause burns upon contact with the skin.
• Acids are soluble in water. Most acids dissolve in water either at room temperature or on heating to form a clear solution. For example, vinegar is a 3-5% solution of acetic acid in water.
• Depending on the amount of water, acids can be either dilute or concentrated.
• If the amount of water is more in an acid, it is called dilute acid and if the amount of water is less, it is called concentrated acid.

Acids can be strong or weak.
A strong acid is highly corrosive and can cause severe burns.
Nitric acid and sulphuric acids are a few examples of strong acids.
Weak acids, on the other hand, are not as destructive as strong acids.
Organic acids are generally weak acids.
Uses of Acids

Hydrochloric Acid (HCl)
• Dilute hydrochloric acid is used in various industries for removing deposits from inside boilers. This process is known as de-scaling.
• Hydrochloric acid is also used for cleaning sinks and sanitary ware.
• It helps in the purification of common salt.
Sulphuric Acid (H2SO4)
Sulphuric acid is such an important industrial chemical that it is called the King of chemicals.
Due to its oily appearance, it was earlier called oil of vitriol.
Some of its major uses are as follows:
• Sulphuric acid is used in car batteries
• It is used in the manufacture of paints, drugs, dyes, and artificial silk.
• It is also used to produce fertilizers such as ammonium sulphate and super phosphate.
Nitric Acid (HNO3)
• Nitric acid is used in the manufacture of explosives such as TNT (trinitrotoluene) and
nitroglycerine.
• It is used by goldsmiths for cleaning gold and silver ornaments.
• It is also used for the production of fertilizers such as ammonium nitrate.
Acetic Acid (CH3COOH)
• Acetic acid is used directly to enhance the flavour of food. In fact, we commonly know acetic acid as vinegar

• It is also used as a cleansing agent in products meant for cleaning windows, floors, utensils,
etc. It also helps to remove stains on woodwork and carpets.
• Acetic acid is used as a preservative in pickles, etc.
Most micro-orgnasims cannot live in an acidic environment.
An acidic environment either slows down their activities or can also kill them.
This is why you will find vinegar in many common packaged food items such as pickles, sauces, ketchups, etc.
3. ACID RAINS
Pollutants such as sulphur dioxide gas and oxides of nitrogen present in the air react in the atmosphere with water and oxygen to form sulphuric acid and nitric acid respectively.
These acids come down as rain. Acid rains cause great damage to plants and animal life, it also damage buildings and monuments.
4. BASES
Basic Substances
Basic substances are those which contain bases.
Examples:
Sodium hydroxide (NaOH)
Calcium hydroxide [Ca(OH)2]
Bases also occur in plant and animal bodies such as corn starch, fresh egg white, etc.
Many bases are found in household cleaners.
Bases may have a strong irritating odour and should be used with caution as it can harm the skin and eyes.
Properties of Bases
Some of the characteristic properties of bases are:
• Bases are bitter in taste
• Solutions of bases are soapy to touch. If you rub a drop or two of a very dilute solution of
sodium hydroxide or potassium hydroxide between your fingers, they will feel slippery.
• Bases may or may not be soluble in water. Bases that can dissolve in water are called alkalis.
Some examples of soluble bases or alkalis are sodium hydroxide, potassium hydroxide, and
calcium hydroxide.

An Interesting Fact
There are acids and bases in our body, HCl is present in the stomach. The saliva in your mouth is basic in nature. Blood when healthy is also basic. 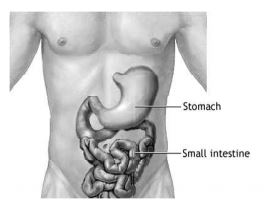 5. INDICATORS
To overcome this, certain chemicals called indicators have been developed.
Indicators are substances which show a change in colour when brought in contact with acids and bases.
Litmus
The most common indicator used in the laboratory is the litmus.
It is extracted from lichens and is available either in the form of solutions or in the form of strips of paper known as litmus paper.
Litmus paper is either red or blue in colour. It changes colour depending upon whether the compound is an acid or a base.
Blue litmus paper turns red under acidic conditions.
Red litmus paper turns blue under basic conditions.

Phenolphthalein
Phenolphthalein is another indicator.
Acids turn colourless and bases turn pink in Phenolphthalein.
Methyl orange
Methyl orange is another indicator.
Acids turn pink and bases turn yellow in methyl orange.
Neutral Substances
The solutions that do not effect a change in colour in any of the indicators are neither acidic nor basic.
These substances, as you already know, are called neutral substances.
Examples:
Sodium chloride, sugar, etc.
Universal Indicators
We also know that acids or bases can be either strong or weak.
So, if we have two solutions that are acidic, how do we find out which one is more acidic?
Similarly we would have situation where we would have to know which one of the two solutions is more basic in nature.
Scientists have made it very easy to know the strength of an acid or a base.
Different strengths have been given what is known as a pH number which ranges from 1 to 14.
1 is considered as strongly acidic and 14 strongly basic. 7 is neutral. You can measure pH of a solution using universal indicator.
A universal indicator is a mixture of indicators so chosen that it gives a different colour for different pH values.
The indicator can be used as a liquid or can be soaked into paper.
This paper is called pH paper.
When a pH paper is dipped in an acid or a base, the colour obtained can be matched with the chart given below

Natural Indicators
Indicators can be prepared very easily from brightly coloured parts of plants such as flowers (china rose, rose), roots (beet root), stems (turmeric), and leaves (red cabbage).
Indicator solution can be prepared by boiling coloured parts of the plant e.g., petals in water for some time and straining out the petals.
This solution gives different colour in acidic and basic solutions.
For example, red cabbage juice will change to deep red with acids, to purple with neutrals, and to green and yellow with bases.

6. SALTS
Salts is a general term used for the substances that are formed when an acid and a base react
with each other.
This reaction is called a neutralization reaction.
The reaction between vinegar and baking soda is also a neutralization reaction.
Vinegar, as we already know contains an acid and baking soda contains base.
In common usage, salt refers to table salt.
In chemistry, salt refers to the product of the reaction between an acid and a base.
So, when vinegar reacts with baking soda, salt is formed. Water and carbon dioxide gas are also the products of this reaction.
Similarly, the common table salt is formed by the reaction of hydrochloric acid (HCl) with sodium hydroxide (NaOH).

Salts can be acidic, basic, or neutral.

Types of Salts
Acidic salts are formed when a strong acid reacts with a weak base.
Basic salts are formed when a strong base reacts with a weak acid.
When a strong acid reacts with a strong base, neutral salts are formed.
Neutralization reactions are quite common in everyday life.
Neutralization in everyday life
Indigestion
To digest food properly the liquid in the stomach must be acidic.
But too much acidity leads to indigestion.
One takes antacids, which usually contains baking soda or magnesium hydroxide to neutralize the excess acid.
Insect Stings
When a bee stings, it injects an acidic liquid into the skin.
The sting is neutralized by rubbing calamine lotion which contains zinc carbonate.
Uses of Salts
Soil Treatment
Most plants grow best in neutral soil. If the soil is too acidic, or too alkaline, the plants do not grow properly or do not grow at all.
Usually, it is too acidic so a base such as quicklime (calcium oxide), slaked lime (calcium hydroxide), or chalk (calcium carbonate) is added.

Factory Waste
Liquid waste from factories often contains acid. If it reaches a river, the acid will kill aquatic life.
This is usually prevented by neutralizing the waste by adding a base such as slaked lime.
Properties of salts

Some of the characteristic properties of salts are:
• Salts are mostly solids which melt as well as boil at high temperatures.
• Salts are generally soluble in water.
For example, sodium chloride, potassium sulphate, aluminium nitrate, ammonium carbonate etc., are
soluble salts while silver chloride, lead chloride, copper carbonate, etc., are insoluble in water.
Water of Crystallization
Generally, salts are found as crystals with water molecules present in them.
This water is called water of crystallization and such salts are called hydrated salts.
For example, copper sulphate has five molecules of water for each copper sulphate molecule.
This is written as CuSO4.5H2O. It also gives colour to some crystals.
On heating, hydrated salts lose their water of crystallization and as a result, the crystals lose their shape and colour and change to a powdery substance.
The hydrated salts that have lost their water of crystallization are called anhydrous salts.
When hydrated copper sulphate is heated, it gives out water molecules to form white powdery anhydrous copper sulphate, which on addition of water again converts to hydrated copper sulphate.
Examples: 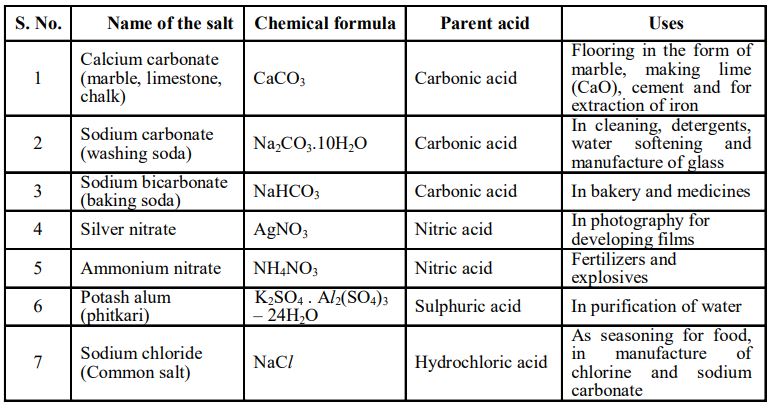 Was this article helpful to you? Yes 16 No 5