1. WATER, OUR LIFELINE
I. Water
Water is an essential element in daily life. Water is used by all living organisms on earth to perform their life processes. Contaminants are the suspended and dissolved impurities of water. Humans contaminate water by their activities. Drinking contaminated water results in the development of diseases such as cholera, typhoid and arrowhead. Polluted water can sometimes be fatal. Water should be boiled and filtered before it is used for drinking as it contains many impurities that are not visible to naked eye.
II. Wastewater
Wastewater is the contaminated water which is often referred to as liquid waste. Liquid waste is mainly released from washrooms, kitchen and other areas where sewage gets collected. Liquid wastes are usually disposed of through closed drains.
III. Components of waste water
There are many components of waste water.

•  Sewage or liquid waste makes up the main component of waste water.

•  Human excreta in the form of faeces is the main suspended impurity in the sewage.

•  Oil and grease float as layers or froth on the waste water.

•  Agricultural wastes like pesticides, fertilisers do not dissolve in water but remain in the waste water.

IV. Causes for contamination of water

•  Human activities like bathing and washing clothes in rivers and lakes.

•  Animals bathing in rivers and lakes.

•  Increase in population forms the major cause for water contamination.

V. Water scarcity
Water scarcity refers to lack of sufficient access to drinking water. Water has become so scarce that many people have to travel several kilometres to fetch drinking water. More than 1.5 billion people all over the world do not get clean drinking water. March 22nd is celebrated as World Water Day. It was on March 22, 2005, that the United Nations declared 2005-2015 as the International Decade for the Action “Water for Life”.
Every house releases lot of waste water daily. Wastewater should be cleaned before it is drained into water bodies. 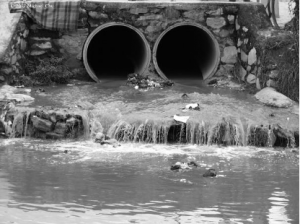 I. Sewage
Sewage is liquid waste containing dissolved impurities called as contaminants. Contaminants are the harmful substances which can cause illness. Sewage comprises dissolved and suspended impurities.

•  Nutrients: Sewage contains some useful nutrients, such as phosphorus and nitrogen.

•  Other microbes: Microbes that cause typhoid, cholera, diarrhoea and dysentery are present in sewage.

There are various types of sewage, depending upon the colour and odour.

•  Sullage water: Wastewater released from the kitchen is called sullage water. The contaminants in sullage water are mild detergents, oils and food particles.

•  Foul waste: Wastewater released from toilets is termed as foul waste. It consists of human waste and a lot of bacteria that release gases and bad odour. It is highly infectious.

•  Trade waste: Wastes released from industries and commercial organisations is called as trade waste. It consists of acids and strong chemicals that are toxic in nature.

III. Sewerage
Small and big pipes that carry waste water are called sewers. All sewers together form the sewerage. Wastewater is carried from home to the point of disposal, that is, the waste water treatment plant through sewerage. After the treatment of waste water, the clean water is released into nearby water bodies. Sewerage has manholes that can be used to clear blockages. Manholes are located at every 50 to 60 metres in the sewerage. Manholes are placed at every junction of pipes forming sewerage.
In the absence of sewerage facility, waste water is directly drained into nearby streams and lakes resulting in water contamination. 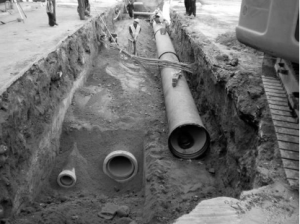 3. WASTEWATER TREATMENT PLANT (WWTP)
Wastewater needs to be treated before it can be reused or released into a water body. Wastewater Water treatment removes impurities from waste water. Wastewater from households is treated at a treatment plant to remove the physical, biological and chemical matter. Treatment of waste water reduces the toxicity of poisonous substances and pollutants in water resources.

II. Laboratory process of water treatment
This involves filtration of water to remove large impurities. An activity is explained to show physical treatment of water. 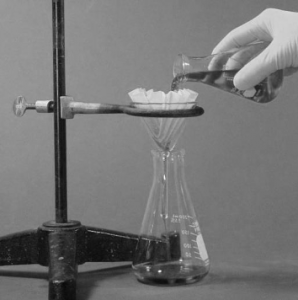 •  Place a cone made up of filter paper in the funnel and wet it with water.

•  Add some sand, fine gravel and medium gravel into the funnel. These form the layers for the process of filtration of water.

•  Pour waste water into the funnel and collect clean water from the stem of the funnel.

•  Process has to be repeated for several times till the collected water looks clean.

•  Step 1 – Bar Screens: Bar screens are the screens that prevent the flow of large objects in waste water. These screens help to remove large objects like rags, plastic bags, cans, napkins and sticks from sewage.

•  Step 2 – Grit chamber: Wastewater from the bar screens is allowed to pass through grit chambers in a slow manner. The slow movement of water makes grit, sand and dust particles to settle down.

•  Step 3 – Clarifier: A clarifier is a tank with its central part inclined downwards so as to allow faces to settle down. The waste settled at the bottom is termed as sludge. Sludge is transferred to a separate tank where it is decomposed using bacteria. Finally, a skimmer is used to remove oils and grease. Clarified water is obtained after the separation of all physical contaminants from the sewage.

The clarified water is passed into an aerator. An aerator pumps air into the water to settle the bacteria to the bottom of the tank as activated sludge. Bacteria under aerated conditions consume impurities left in the water. The water present in the top is 95% clean and is let out into a water source while the activated sludge is dried in a sand bed and is used as manure. 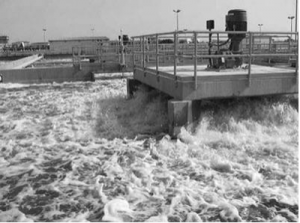 Using bacteria in decomposing waste is the biological treatment.

•  Chlorine gas is introduced through many pipes into a tank with water stored after physical and biological treatment.

•  Ozone is also used in chemical purification of water. 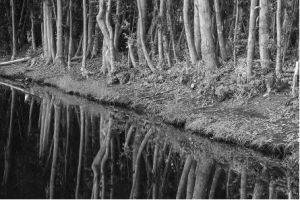 V.  Prevention of clogging of drains

•  Oils and fats released from the kitchen can harden along with detergents to block water pipes. In an open drain, fats on entering the soil, clog the soil pores. This reduces the effectiveness of filtration of water or water seeping.

Chemicals like paints, medicines, motor oil and many other solvents kill the microbes that help in water treatment. Awareness has to be created in people about the ill effects of throwing pollutants into the drain.

4. BETTER HOUSE KEEPING PRACTICES
Do not throw cooking oil and fat in the drain. This can block the drain. The fat and oil clogs the pores in the soil; in open drains. This reduces the filtering capacity of soil.
Do not throw chemicals; like paint, insecticides, medicines, etc. into the drain. They kill the bacteria which otherwise help in cleaning the water.
Do not throw used tea leaves, solid food, soft toys or napkins in the drain. They can clog the drain and do not allow oxygen to enter the sewage water. Oxygen is important for the natural process of decomposition.

5. SANITATION AND DISEASE
I. Sanitation
Sanitation refers to hygiene. Sanitation generally refers to the provision of facilities for the safe disposal of human urine and faeces.

•  The main objective of human health is to protect and provide clean environment.

•  Sanitation is a major problem in developing countries such as India and China.

•  Due to explosion in population, government is unable to provide proper sanitation through underground drainage system.

6. SEWAGE DISPOSAL SYSTEMS
On-site sewage disposal systems are the systems which collect human excreta and store it in a hole or a pipe and later directed into a sewage treatment plant.
Other methods for sewage disposal are septic tanks, chemical toilets, composting pits and vermi-composting toilets. These on-site sewage disposal systems are cost-effective.
a. Septic tanks
Septic tank is a water tight chamber made of brick, concrete or glass. Solid particles settle down at the bottom and are degraded anaerobically. Effluent escapes through sewers and should be allowed to soak or evaporate.
Advantages: Septic tanks are suitable for places such as hospitals, isolated buildings and cluster of houses where there is no sewerage. The septic tank system consists of a small sewage treatment system.
Disadvantages: They require lot of space. They are costly to set up. They have to be periodically cleaned. Water seeps through the ground affecting trees and swimming pools
b. Chemical toilets
Aeroplanes and trains usually have chemical toilets. A chemical toilet uses chemicals to disinfect human waste and remove its bad odour.
Advantages: These are portable latrines that could be set up anywhere. They do not require water. They control emission of foul odour.
Disadvantages: They use toxic chemicals which are not advisable. These are costly. These are for temporary situations.
c. Composting toilets
A composting toilet is a system that converts human waste into organic compost and usable soil. This happens when micro-organisms such as bacteria and fungi, and macro-organisms such as earthworms oxidise organic waste to break it down into essential minerals.
Advantages: These are more environmental- friendly. They require less water. They are well suited for village areas.
Disadvantages: They require proper maintenance. They end up in emitting foul smell, encourage breeding of insects and increase health hazards. End products should be removed at periodic intervals. The rate of decomposition is very slow.

d. Vermi-Composting toilets
A vermi-composting toilet is a process that involves earthworms which treat human excreta. The entire human waste is converted into vermi-compost.
e. Sulabh toilets
Organisations such as Sulabh International have developed a twin-pit pour flush toilet system that is being used by ten million people every day. The waste from these toilets flows through covered drains into a biogas plant for the generation of biogas and bio-fertilisers. Biogas plants offer safe and hygienic disposal of wastes.
Advantages: Sulabh toilets are designed to suit the household conditions. They are affordable at price. They require less space. They eliminate mosquito breeding. They do not pollute the ground water. They are free from foul smell. They are easy to clean and maintain.
Disadvantages: Though easy to maintain, they should be maintained properly. It needs attention of government or private agencies. 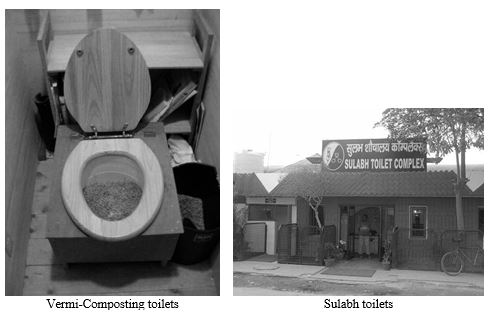 Litter and waste
Litter and waste cause sanitation havoc at public places. This becomes common when exhibitions and fares are conducted.
Public places such as railway stations, bus depots, airports and hospitals generate lot of waste, which leads to diseases. To prevent the breaking up of diseases, certain measures are to be taken and awareness among people should be created. 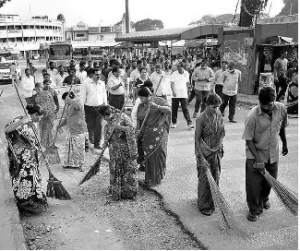 Was this article helpful to you? Yes 19 No 4