1. INTRODUCTION
In our previous classes, we have learnt about living and nonliving things. Though there are many differences, a living organism shows seven basic characteristics that differentiate it from a non-living one. These characteristics are called life characteristics, because together they ensure that an organism continues to live.

In this chapter, we will learn about nutrition, more specifically nutrition in plants. But, what does the term nutrition mean?  Before, knowing about it, let’s know what food is.
Any substance that can be broken down through chemical processes in the body of an organism to give energy is called food
Food gives energy to perform many activities like studying, playing, talking, drawing, etc.

2. Nutrition
The entire process of taking in food and drink by living organisms and using it for the purpose of growth and daily activities is called Nutrition.
There are two major modes of nutrition:

(b) Heterotrophic nutrition.
Autotrophic Nutrition
We have seen animals and humans eating food. We get energy from the food we eat. How about plants?
Neither they can cook food nor they can to different places like animals in search of food.
How then are they preparing food?
Photosynthesis
Green plants actually make their own food through a process called photosynthesis (photo, light; synthesis, to put together). The mode of nutrition whereby a living organism makes its own food is called autotrophic nutrition. Organisms that are able to synthesize their own food are termed autotrophs  (auto, self; trophe, nutrition).

The term photosynthesis was coined by Charles Reid Barnes in 1883. 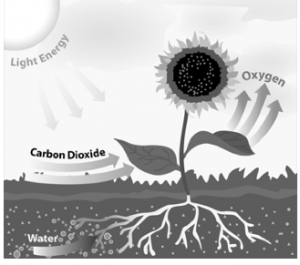 The reaction that takes place can be written as:

Thus, photosynthesis can be defined as:

The process of using the energy in sunlight to convert water and carbon dioxide into carbohydrates (starch) and oxygen is called Photosynthesis.
Photosynthesis – Necessary Conditions

i) Chlorophyll
It is a green pigment present in the structures called chloroplasts of leaves in a plant. 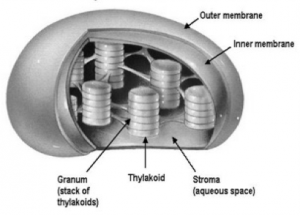 Note:
A naturally occurring substance that gives a particular colour to a plant or an animal part is called a pigment. On average, there are about 500,000 chloroplasts per square millimeter of a leaf.
ii) Sunlight
It is the source of light energy required for photosynthesis.  Chlorophyll traps the light energy to make energy-carrying particles.

iii) Carbon dioxide
It is obtained from the atmosphere through small openings called stomata (singular: stoma) in the underside of the leaves.

iv) Water
This is another important requirement for photosynthesis. The root system of plants enables them to obtain water from the soil. 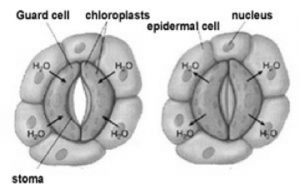 Factors Affecting Photosynthesis
Following factors affect the rate of photosynthesis:
1. Light intensity: Photosynthesis increases with increase in light intensity, upto a certain point.
2. Availability of carbon dioxide: Photosynthesis increases with increase in carbon dioxide concentration.
3. Temperature: Up to a certain temperature value, rate increases with increase in temperature. This value ranges generally between 20° to 35°C.
4. Availability of water: Less availability of water reduces photosynthesis through closure of stomata.
5. Inorganic mineral ions: A dehydrated green plant (a plant from which all water has been removed) consists of four elements – carbon, hydrogen, oxygen and nitrogen. These elements   consist of about 96% of total plant’s dry weight combined together in the form of organic compounds (proteins, carbohydrates, fats etc.).
The remaining 4% of the green plant dry weight consists of the following chemical elements in the form of inorganic compounds – sulphur, phosphorus, calcium, iron, magnesium, potassium, chlorine, aluminium, boron, manganese, copper, zinc and chlorine. These elements are obtained from soil water, taken up through the root system as ions. Each of the inorganic ions  has different functions in the process of photosynthesis.
Some of the elements are required in higher quantities (called macronutrients) while others are required in lower quantities (called micronutrients or trace nutrients).
Macronutrients: Carbon, hydrogen, oxygen, nitrogen, phosphorus, sulphur, potassium, calcium, iron and magnesium.
Micronutrients: Copper, zinc, boron, manganese, and molybdenum.

3. Transport of Materials
There are two aspects of transport in plants:
(i) Movement of water and minerals from the roots upwards to other plant parts, and
(ii) Movement of food material synthesized in the leaves to other plant parts. Upward movement of water and minerals occurs through channels, called xylem elements, present in roots, stem and leaves of plants.
The prepared food material in a soluble form is carried through another channel, called phloem, from the leaves to all other parts of the body.
Demonstration of Upward Movement of Water
Take a cut shoot of balsum plant and dip it in a dilute red coloured dye, eosin or safranin. Leave it for some time.
Then, take sections from different parts of the stem starting from the tip region. You will observe red colour dye in the region of xylem (Figure).

Demonstration of the Transport of Food Material

This is easily demonstrated by an experiment commonly known as ‘girdling experiment’. Girdling of stem removes phloem tissue (Figure). If a stem is girdled, the downward and upward movement of food material gets blocked. So, the trunk portion shows swelling in the area due to accumulation of food material. 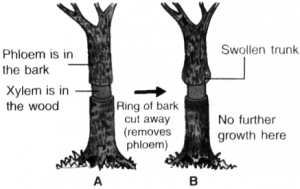 Cuscuta (Dodder) has a short root and a long, thread-like stem. It twines around the host stem and sends branches around neighbouring stems giving the appearance of a mass of noodles or spaghetti.

An Interesting Fact
A parasitic plant, Rafflesia, bears the world’s largest flower. The flowers have five petals and may have a diameter of up to 106 cm, and weigh up to 10 kg. In a parasitic relationship, only the parasitic plant benefits. 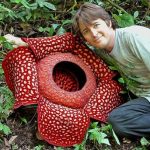 Saprophytic plants are usually whitish, but can have brightly coloured flowers. These plants have no green leaves; often they even have no leaves at all. So, how do saprophytic plants manage their nutrition? Saprophytic plants are plants that live off rotting material (sapros, rotting; phyton, plant). They grow in places with lots of rotting dead leaves, often in deep shade in tropical forests. Some examples are Indian Pipe and coral root. 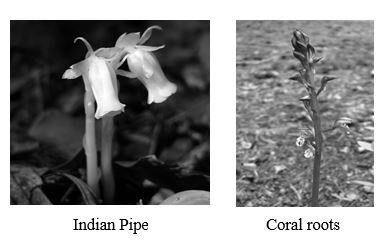 Indian Pipe is found commonly in Asia and throughout North America. Coral roots are found in forest environments around the world. The roots of saprophytes contain living organisms called fungi. Fungi are capable of digesting dead and decaying matter. The fungi produce digestive juices which converts the dead and decaying matter into sugar which can be then used as food by these plants. Fungi are also called saprotrophs.

Interesting Point
According to the latest system of classification of organisms, fungi is no longer considered in plant kingdom. It is placed in a separate kingdom — Kingdom Fungi.

Mushrooms and toadstools are the most common examples of fungi.

Examples
i) In the pitcher plant, the leaf is modified to form a tubular pitcher like structure. The inside of the pitcher is lined with downward pointing hairs. These hairs do not allow any insect to climb back up and escape.  The fluid at the bottom of the pitcher contains digestive juices that digest the insect.
ii) The slender leaves of bladderworts bear a large number of very small, pear-shaped bladders. This opens a trapdoor and the prey is sucked in within one-thousandth of a second.
iii) The leaves of sundew (Drosera) have tentacles with drops of a sticky substance called mucilage at the ends; insects get stuck in this substance and become entangled. The helpless insect then gets digested.
iv) The trap of the Venus flytrap is a highly modified leaf. On the inner surface (reddish here to attract insects) there are short, stiff hairs. When anything touches these hairs, the two lobes of the leaves snap shut in less than a second.
IV. Symbiotic plants
There are certain plants which live in association with other species and share their food resources.
Both the types mutually gain from each other. Such plants are called symbiotic plants and the relationship is called symbiosis. A good example is lichens.

• Lichens are an association between a fungus and a microscopic plant — green algae. The fungus obtains nutrients from the algae, and the fungus in turn provides shelter to the algae, so that it can grow in harsh conditions like rock surfaces where it would otherwise not survive.

• Roots of certain plants such as peas contain bacteria called Rhizobium. It converts atmospheric nitrogen into plant-usable forms, e.g., ammonia. The plant in turn provides nutrient for the bacteria’s growth.

Replenishment of Nutrients in the Soil
Plants utilize the mineral nutrients, especially nitrogen present in the soil, for their growth. As a result there is a depletion of nitrogen in the soil over a period of time. Manure contains a lot of nitrogen apart from potassium and phosphorus. This is needed by the plant for healthy growth.

Was this article helpful to you? Yes 74 No 7