1. INTRODUCTION
Our study so far has been with numbers and shapes. We have learnt numbers, operations on numbers and properties of numbers. We applied our knowledge of numbers to various problems in our life. The branch of mathematics in which we studied numbers is arithmetic. We have also learnt about figures in two and three dimensions and their properties. The branch of mathematics in which we studied shapes is Geometry. Now we begin the study of another branch of mathematics. It is called Algebra.
The main feature of the new branch which we are going to study is the use of letters. Use of letters will allow us to write rules and formulas in a general way. By using letters, we can talk about any number and not just a particular number. Secondly, letters may stand for unknown quantities. By learning methods of determining unknowns, we develop powerful tools for solving puzzles and many problems from daily life. Thirdly, since letters stand for numbers, operations can be performed on them as on numbers. This leads to the study of algebraic expressions and their properties.

2. VARIABLES
An unknown quantity can be represented by a variable. Usually, a variable is any letter from the English alphabet that represents an unknown quantity. The relation between the unknown quantity and other quantities can be expressed with the help of the variable. The value of the variable varies with the given condition on the variable. A quantity whose value does not vary is called a constant. An expression consisting of variables, constants and mathematical operators is called an algebraic expression. Mathematical operations such as addition, subtraction, multiplication and division can be easily performed on variables. We can use variables to form expressions based on patterns.
The following are some branches of mathematics:
• The branch of mathematics where letters are used along with numbers is called algebra.
• The branch of mathematics that deals with numbers, operations on numbers and properties of numbers is called arithmetic.
• The branch of mathematics that deals with the figures and shapes is called geometry.
Use of Variables
Variables are used to frame rules to find the perimeter of a polygon. The perimeter of a polygon can be obtained by adding the lengths of its sides. The following are simple rules to frame the perimeter of geometrical figures using variables.
If the length of the side is denoted by variable’s’, then the perimeter of a square is equal to 4s 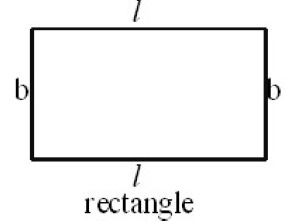 If the lengths of the sides of a triangle are denoted by x. y and z then the perimeter of the triangle is equal to x + y + z. 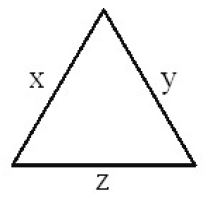 5. ALGEBRAIC EXPRESSION
A combination of constants and variables connected by the sign of fundamental operations of addition, subtraction, multiplication and division are called algebraic expressions.
Eg:
Algebraic Terms
A term in an algebraic expression is any chunk of symbols set off from the rest of the expression by either addition or subtraction.
Here are some examples:

When a term has a variable, it’s called an algebraic term. When it doesn’t have a variable, it is called a constant. For example, look at the following expression:
The first three terms are algebraic terms, and the last term is a constant. As you can see, in algebra, constant is just a fancy word for number.
Rearranging Terms
After you understand how to separate an algebraic expression into terms, you can go one step further by rearranging the terms in any order you like.
For example, suppose you begin with the expression –5x + 2. You can rearrange the two terms of this expression without changing its value. Notice that each term’s sign stays with that term, though dropping the plus sign at the beginning of an expression is customary. Rearranging terms in this way does not affect the value of the expression because addition is commutative that is, you can rearrange things that you are adding and without changing the answer.
Example: suppose x = 3. Then the original expression and its rearrangement evaluate as follows:

Rearranging expressions in this way becomes handy later in this chapter, when you simplify algebraic expressions. As another example, suppose you have this expression: 4x – y + 6
You can rearrange it in a variety of ways:
= 6 + 4x – y
= –y + 4x + 6
Because the term 4x has no sign, it is positive, so you can write in a plus sign as needed when rearranging terms.
As long as each term’s sign stays with that term, rearranging the terms in an expression has no effect on its value.
For example, suppose that x = 2 and y = 3. Here is how to evaluate the original expression and the two rearrangements:

Was this article helpful to you? Yes 1 No 2