[Where  means summation and i means 1 to n.]

Assumed Mean Method
We choose assumed mean a (say) and subtract if from each of the values . The reduced value
– a is called the deviation of  from a. The deviation are multiplied by corresponding frequencies to get . On adding all we get the sum, i.e.  .
Let be values of a variable x, with corresponding frequencies respectively.
di =  – a;
where i = 1, 2, 3, … n
;    where i = 1, 2,3, … n

on dividing by  , we get

Step-Deviation Method
Deviation method can be further simplified on dividing the deviation by width of the class interval h. In such a case the arithmetic mean is reduced to a great extent.
=  ; 1, 2, 3, …, n

Example 1
Find the mean of the following distribution

Example 2
If the mean of the following is 6, find the value of p.

Example 3
Calculate the Arithmetic mean of the following frequency distribution

6.3 MODE OF GROUPED DATA
We can locate a class with maximum frequency, called modal class. The mode is a value inside the modal class, and is given by the following formula:

Example 4
The following table shows the ages of the patients admitted in a hospital:

Hence, the average age for which maximum cases occurred is 36.818.

POINT TO BE REMEMBERD

6.6 GRAPHICAL REPRESENTATION OF CUMULATIVE FREQUENCY DISTRIBUTION
A graphical representation helps us in understanding given data at a glance. Now, We have to represent a cumulative frequency distribution graphically.
Example:
Table for less than type:

Table for more than type: 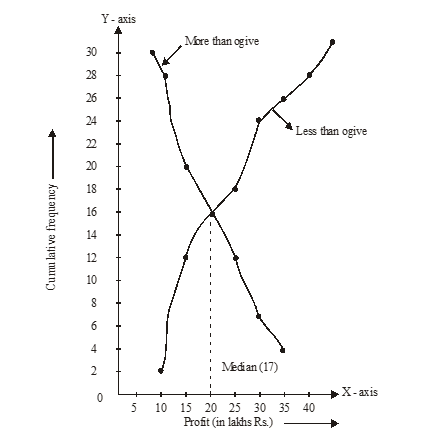 The abscissa of point of intersection is of two curves 17 hence, median = 17