Here is a typical polynomial: 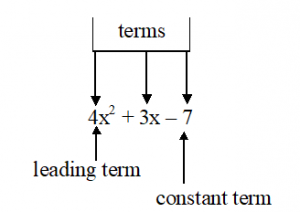 Notice the exponents on the terms. The first term has exponent 2; the second term has an understood exponent 1; and the last term doesn’t have any variable at all. Polynomials are usually written this way, with the terms written in “decreasing” order; that is, with the highest exponent first, the next highest next, and so forth, until you get down to the plain old number.
Any term that doesn’t have a variable in it is called a “constant” term because, no matter what value you may put in for the variable x, that constant term will never change. In the picture above, no matter what x might be, 7 will always be just 7.

Degree of Polynomial
The highest exponent in various terms of one variable in a polynomial is called its degree. For example The degree of x2 + 4x + 10 is 2.
Polynomials are also sometimes named for their degree: 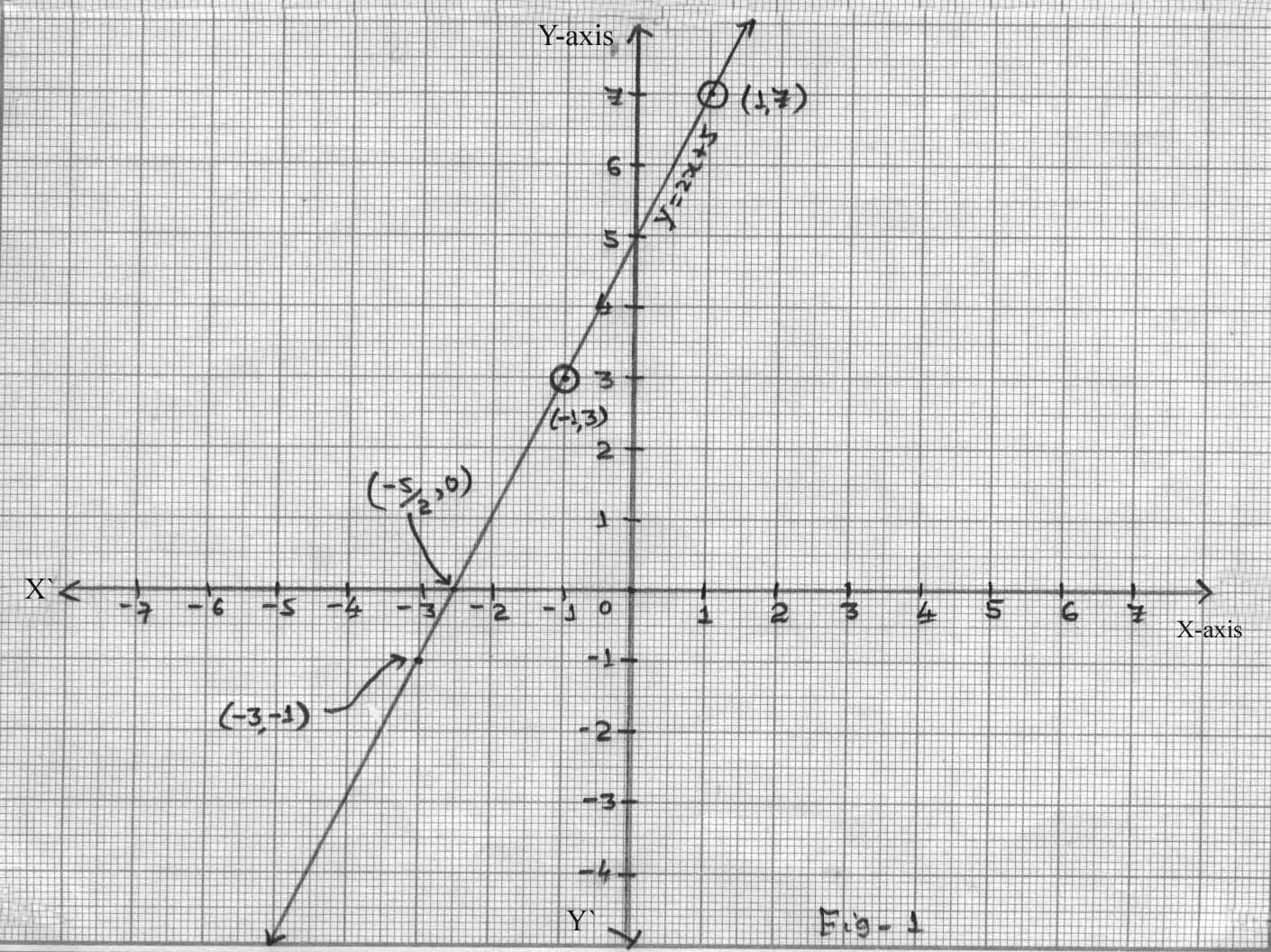 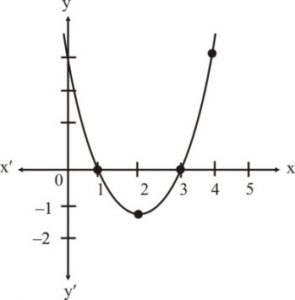 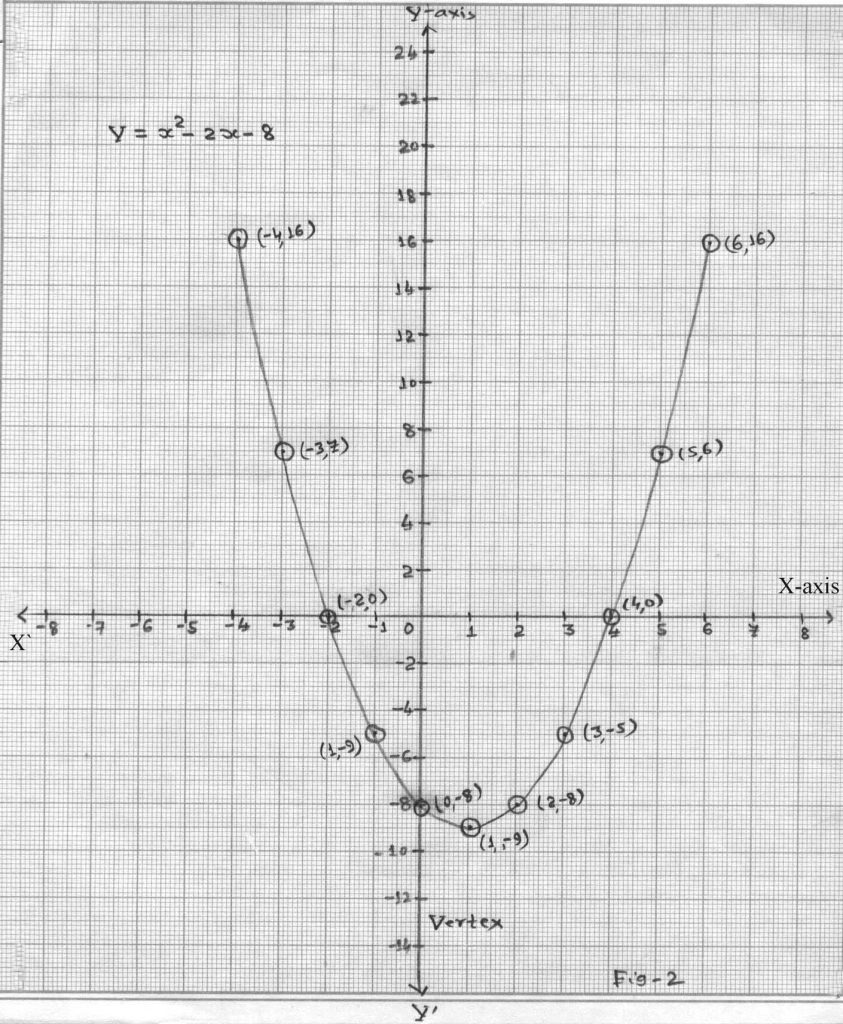 In fact, for any quadratic polynomial ax2 + bx + c = 0, ,the graph of the corresponding equation y = ax2 + bx + c has one of the two shapes either open upwards like

depending on whether a > 0 or a < 0. (such types of curves are called parabolas).
It is true for any quadratic polynomial, i.e., the zeroes of a quadratic polynomial ax2 + bx + c = 0, a0, are precisely the x–coordinates of the points where the parabola representing

y = ax2 + bx + c intersects the x–axis.
So, from our observation earlier about the shape of the graph of

In this case the x–coordinate of P is the only zero for the quadratic polynomial ax2  + bx + c.
Case – III : The graph is either completely above x–axis or completely below the x–axis.
Hence, it does not cut the x–axis at any point. Fig. – 5 (i & ii)

Hence, the quadratic polynomial ax2 + bx + c has no zero in this case.
Example 1:
Let us consider the cubic polynomial x3 – 4x in order to find graph of  y = x3 – 4x.
Now, the values of y for various values of x are listed in the following table.

Example 2 :
Let us consider the cubic polynomial x3 –2x2 in order to find graph y = x3 – 2x2
Now, the values of y for various values of x are listed in the following table. 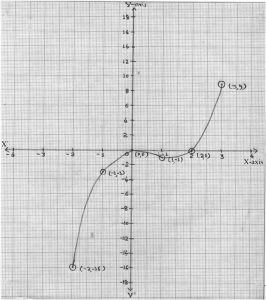 Example 3:
Let us consider the cubic polynomial x3 i.e. y=f(x)y=, .
Now, the values of y for various values of x are given in the following table : 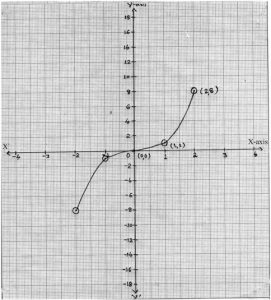 The product of zeroes is

Example 5
Verify that  , 1, –2 are the zeroes of the cubic polynomial 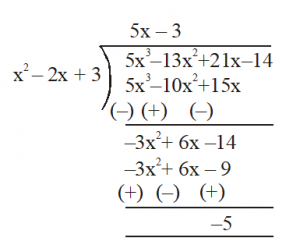 Hence, the zeroes of the given polynomial are  and 1/2.