Q1. Who discovered cells and how?

Cells were discovered in 1665 by an English Botanist, Robert Hooke. He used a primitive microscope to observe cells in a cork slice.

Q2. Why is the cell called the structural and functional unit of life?

Cells constitute various components of plants and animals. A cell is the smallest unit of life and is capable of all living functions. Cells are the building blocks of life. This is the reason why cells are referred to as the basic structural and functional units of life. All cells vary in their shape, size, and activity they perform. In fact, the shape and size of the cell is related to the specific functions they perform.

Q1. How do substances like CO2 and water move in and out of the cell? Discuss.

The cell membrane is selectively permeable and regulates the movement of substances in and out of the cell.

Q2. Why is the plasma membrane called a selectively permeable membrane?

Q1. Fill in the gaps in the following table illustrating differences between prokaryotic and eukaryotic cells.

Q1. Can you name the two organelles we have studied that contain their own genetic material?

Mitochondria and plastids are the two organelles that contain their own genetic material. Both these organelles have their own DNA and ribosomes.

Q2. If the organisation of a cell is destroyed due to some physical or chemical influence, what will happen?

Cell is the smallest unit of life, which is capable of all living functions. If the organisation of a cell is destroyed due to some physical or chemical influence, then the ability of the cell to perform all living functions such as respiration, nutrition, excretion, etc. would be affected.

Q3. Why are lysosomes known as suicide bags?

Lysosomes are membrane-bound vesicular structures that contain powerful digestive enzymes. These enzymes are capable of breaking down any foreign food particle or microbes entering the cell. Sometimes, lysosomes can cause self-destruction of a cell by releasing these digestive enzymes within the cells. Hence, they are also known as ‘suicidal bags’.

Q4. Where are proteins synthesized inside the cell?

Ribosomes are the site for protein synthesis. Ribosomes are very small structures found either in a free state, suspended in the cytoplasm, or attached to the surface of the endoplasmic reticulum. They are composed of ribonucleic acids and proteins.

Q1. Make a comparison and write down ways in which plant cells are different from animal cells. 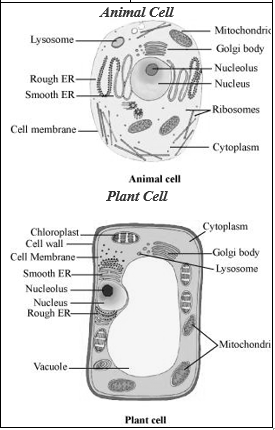 Q3. What would happen if the plasma membrane ruptures or breaks down?

Q4. What would happen to the life of a cell if there was no Golgi apparatus?

(i) Membranes of the Golgi apparatus are often connected to ER membranes. It collects simpler molecules and combines them to make more complex molecules. These are then packaged in small vesicles and are either stored in the cell or sent out as per the requirement. Thus, if the Golgi apparatus is absent in the cell, then the above process of storage, modification, and packaging of products will not be possible.

(ii) The formation of complex sugars from simple sugars will not be possible as this takes place with the help of enzymes present in Golgi bodies.

Q5. Which organelle is known as the powerhouse of the cell? Why?

Q6. Where do the lipids and proteins constituting the cell membrane get synthesized?

Lipids and proteins constituting the cell membrane are synthesized in the endoplasmic reticulum.

SER (Smooth endoplasmic reticulum) helps in the manufacturing of lipids.

RER (Rough endoplasmic reticulum) has particles attached to its surface, called ribosomes. These ribosomes are the site for protein synthesis.

Q7. How does an Amoeba obtain its food?

Amoeba obtains its food through the process of endocytosis. The flexibility of the cell membrane enables the cell to engulf the solid particles of food and other materials from its external environment. 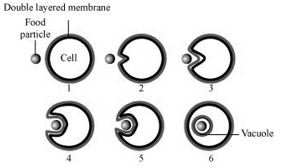 Q8. What is osmosis?

For example, if the medium surrounding the cell has a higher water concentration than the cell i.e., if the solution is a dilute solution, then the cell will gain water by osmosis. 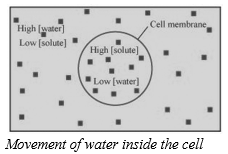 Take four peeled potato halves and scoop each one out to make potato cups. One of these potato cups should be made from a boiled potato. Put each potato cup in a trough containing water. Now,

(a) Keep cup A empty

(b) Put one teaspoon sugar in cup B

Keep these for two hours. Then observe the four potato cups and answer the following:

(i) Explain why water gathers in the hollowed portion of B and C.

(ii) Why is potato A necessary for this experiment?

(iii) Explain why water does not gather in the hollowed out portions of A and D.

(ii) Potato A in the experiment acts as a control set-up. No water gathers in the hollowed portions of potato A.

(iii) Water does not gather in the hollowed portions of potato A because potato cup A is empty. It is a control set-up in the experiment.

Water is not able to enter potato D because the potato used here is boiled. Boiling denatures the proteins present in the cell membrane and thus, disrupts the cell membrane. For osmosis, a semi-permeable membrane is required, which is disrupted in this case. Therefore, osmosis will not occur. Hence, water does not enter the boiled potato cup.

Was this article helpful to you? Yes 4 No 1