Q1. Explain the importance of reproduction in organisms.

Q2. Describe the process of fertilization in human beings. 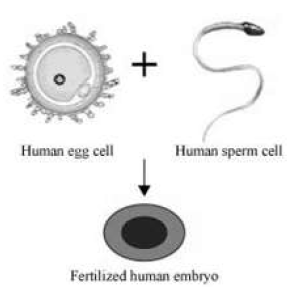 During fertilization, the haploid nucleus of the sperm and that of the ovum fuse
with each other to form the zygote. This zygote divides to form an embryo which in turn develops into a foetus.

Q3. Choose the most appropriate answer.
(a) Internal fertilization occurs
(i) in female body.
(ii) outside female body.
(iii) in male body.
(iv) outside male body.
(b) A tadpole develops into an adult frog by the process of
(i) fertilization
(ii) metamorphosis
(iii) embedding
(iv) budding
(c) The number of nuclei present in a zygote is
(i) none   (ii) one
(iii) two   (iv) four

Ans. (a) (i) Internal fertilization occurs in the female body.
(b) (ii) A tadpole develops into an adult frog by the process of metamorphosis.
(c) (ii) The number of nuclei present in a zygote is one.

Q4. Indicate whether the following statements are True (T) or False (F).

Q5. Give two differences between a zygote and a foetus.

(ii) Budding:
Budding involves the formation of a new individual from the bulges, known as buds formed on the parent body. This method of reproduction is common inHydra.In Hydra, thecells divide rapidly at a specific site and develop as an outgrowth, called the bud. These buds, while being attached to the parent plant, develop into smaller individuals. When these individuals become mature enough, they detach from the parent’s body and become independent individuals.

Q7. In which female reproductive organ does the embryo get embedded?

Ans. The embryo gets embedded in the wall of the uterus. The embryo while it is still attached to the uterus gradually develops various body parts such as hands, legs, head, eyes, etc. The embryo is then called a foetus.

Q8. What is metamorphosis? Give examples.

Ans. Metamorphosis is a biological process of transforming a larva into an adult. This involves relatively sudden and abrupt changes in the animal’s structure. Frogs and insects are examples of organisms showing metamorphosis. The life cycle of a frog has three distinct stages:
EGG  → TADPOLE  → ADULT 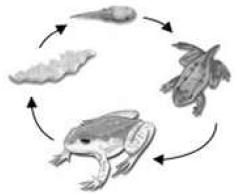 The tadpole that emerges from the egg contains gills, a tail, and a small circular mouth. They can swim freely in water. The tadpole grows and involves abrupt changes in its structure and develops into a mature frog. A tadpole’s metamorphosis begins with the development of limbs, lung development, and finally the absorption of the tail by the body.

Q10. Complete the crossword puzzle using the hints given below.

Across
1. The process of the fusion of the gametes.
6. The type of fertilization in hen.
7. The term used for bulges observed on the sides of the body of Hydra.
8. Eggs are produced here. 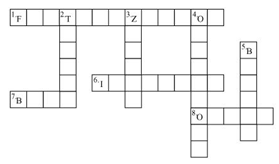 Down
2. Sperms are produced in these male reproductive organs.
3. Another term for the fertilized egg.
4. These animals lay eggs.
5. A type of fission in amoeba. 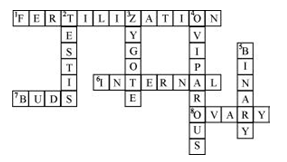