Q1. What are the advantages of using CNG and LPG as fuels?

Ans. The advantages of using compressed natural gas (CNG) and liquified petroleum gas (LPG) as fuels are:
(i) They can be burnt directly.
(ii) They can be transported easily through pipe lines.
(iii) They are clean fuels and do not give smoke when burnt.
(iv) They give a lot of heat energy when burnt.

Q2. Name the petroleum product used for surfacing of roads.

Ans. Bitumen is the petroleum product which is used for surfacing of roads these days.

Q3. Describe how coal is formed from dead vegetation. What is this process called?

Ans. About 300 million years ago the earth had dense forest in low lying wetland areas. Due to various natural processes, like flooding and earthquakes, these forests got buried under the soil. The soil deposits layer by layer over them, they were compressed. Under high temperature and pressure the plants got converted to coal slowly. This process is called carbonisation.

Q5. True /False.
(a) Fossil fuels can be made in the laboratory.
(b) CNG is more polluting fuel than petrol.
(c) Coke is almost pure form of carbon.
(d) Coal tar is a mixture of various substances.
(e) Kerosene is not a fossil fuel.

Ans. Fossil fuels are present in limited quantity in the nature. They can be exhausted by human activities. So fossil fuels are called exhaustible natural resources.

Ans. (i) Coke is a tough.
(ii) It is porous and black substance.
(iii) It is an almost pure form of carbon.
Uses: Coke is used in the manufacture of steel and in the extraction of many metals.

Q8. Explain the process of formation of petroleum.

Ans. Petroleum was formed from organisms living in the sea. As these organisms died their bodies settled at the bottom of the sea. These bodies got covered with layers of sand and clay. Over millions of years, absence of air, high temperature and pressure the dead bodies are converted into petroleum and natural gas.

Q9. The following Table shows the total power shortage in India from 1991-1997. Show the data in the form of graph. Plot shortage percentage for the years on the y-axis and the year on x-axis. 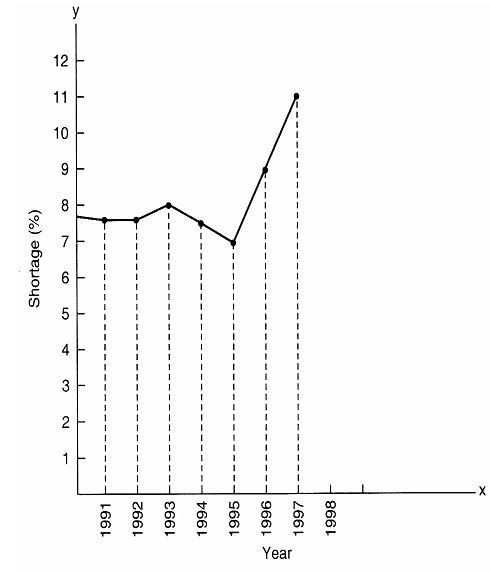