Q1. Classify the following as motion along a straight line, circular or oscillatory motion:

(i) Motion of your hands while running.

(ii) Motion of a horse pulling a cart on a straight road.

(iii) Motion of a child in a merry-go-round.

(v) Motion of the hammer of an electric bell.

(vi) Motion of a train on a straight bridge.

While running, the hands move to and fro and repeat their motion after a given interval of time. Hence, it is an oscillatory motion.

The horse is pulling a cart on a straight road. Therefore, it has a motion along a straight line.

The child on a see-saw goes up and down continuously. It oscillates up-down. Therefore, it is an oscillatory motion.

The hammer hits the electric bell and vibrates rapidly. Therefore, it is an oscillatory motion.

The train is moving on a straight bridge. Therefore, it has a motion along a straight line.

Q2. Which of the following are not correct?

(i) The basic unit of time is second.

(ii) Every object moves with a constant speed.

(iii) Distances between two cities are measured in kilometres.(iv) The time period of a given pendulum is not constant.

(v) The speed of a train is expressed in m/h.

Second is the SI unit of time.

An object can move with constant or variable speed.

Time period of a pendulum depends on the length of the thread. Hence, it is constant for a particular pendulum.

The speed of a train is measured either in km/h or in m/s.

Q3. A simple pendulum takes 32 s to complete 20 oscillations. What is the time period of the pendulum?

Q4. The distance between two stations is 240 km. A train takes 4 hours to cover this distance. Calculate the speed of the train.

Distance covered by the car = 15 km

Time taken by the car =

Q6. Salma takes 15 minutes from her house to reach her school on a bicycle. If the bicycle has a speed of 2 m/s, calculate the distance between her house and the school.

Q7. Show the shape of the distance-time graph for the motion in the following cases:

(i) A car moving with a constant speed.

Ans. (i) A car moving with a constant speed covers equal distance in equal intervals of time. Such motion of car is represented in the given distance-time graph. 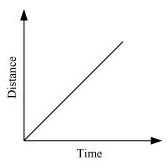 (ii) The distance-time graph of a car parked on a road side is such that with the increase in time, there is no change in distance, as shown in the given figure. 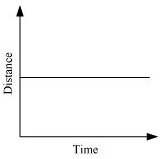 Q8. Which of the following relations is correct?

Ans. (ii) Speed of an object is given by the relation

Q9. The basic unit of speed is:

The basic unit of distance is metre (m).

The basic unit of time is second (s).

Therefore, the basic unit of speed is m/s.

Therefore, the total distance covered by the car is 25 km.

Q11. Suppose the two photographs, shown in Figure 1 and Figure 2, had been taken at an interval of 10 seconds. If a distance of 100 metres is shown by 1 cm in these photographs, calculate the speed of the blue car. 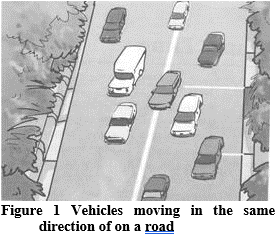 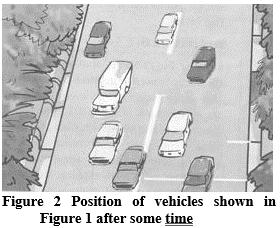 Ans. The distance covered by the blue car (as evident from the photograph) from one white strip to another, which is measured by scale is 1.4 cm.

Distance travelled by the car = 140 m

Q12. Figure shows the distance-time graph for the motion of two vehicles A and B. Which one of them is moving faster? 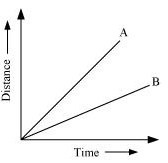 Distance-time graph for the motion of two cars

Ans. Vehicle A is moving faster than vehicle B. 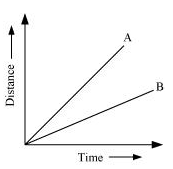 Speed is given by the relation

This relation shows that speed of a vehicle is greater if it covers maximum distance in a given interval of time. To compare the distance, draw a line perpendicular to the time-axis, as shown in the following distance-time graph. 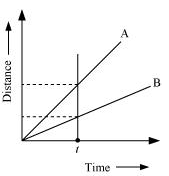 Q13. Which of the following distance-time graphs shows a truck moving with speed which is not constant? 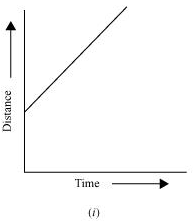 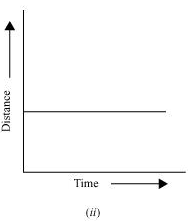 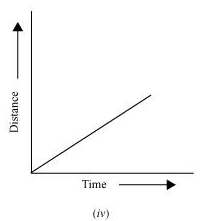 In a distance-time graph, the constant speed of a truck will be represented by a straight line.

In a distance-time graph, a straight line parallel to the time axis indicates that the truck is not moving.

A curved line on the distance-time graph indicates that the truck is moving with a speed which is not constant.