Q1. What is the composition of air ?

Q2. Which gas in the atmosphere is essential for respiration ?

Ans. Oxygen is essential for respiration.

Q3. How will you prove that air supports burning ?

Ans. Take a candle. Place it in a tub. Light the candle and also fill the tub with some water. Cover the candle with an inverted glass. You will find that the candle blows out after burning for some time, and the water level inside the inverted glass rises up to some extent.

The component, oxygen, of air inside the glass is used up in burning. Therefore, water occupies that space. This shows that air supports burning.

Q4. How will you show that air is dissolved in water ?

Q5. Why does a lump of cotton wool shrink in water ?

Ans. The layer of air around the Earth is known as atmosphere.

Ans. The component of air used by green plants to make their food is carbon dioxide.

Q8. List five activities that are possible due to the presence of air.

(v) Generation of electricity by windmills.

Q9. How do plants and animals help each other in exchange of gases in the atmosphere ? 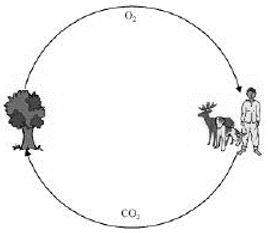 In this way, plants and animals help each other in exchange of gases in the atmosphere.

Was this article helpful to you? Yes 24 No 4