Q2. Give any two ways in which biodegradable substances would affect the environment.

Ans. Biodegradable substances affect the environment in the following ways:

(i) The biodegradable substances such as tree leaves, plant parts, and kitchen wastes can be used as humus after composting. This will enhance the soil fertility.

(ii) The biodegradable substances mainly contain carbon. These substances after decomposition release that carbon back into the atmosphere.

Q3. Give any two ways in which non-biodegradable substances would affect the environment.

Ans. Non-biodegradable substances affect the environment in the following ways:

(i) They contaminate soil and water resources as they cannot be decomposed by micro-organisms. (ii) These substances, when accidentally eaten by stray animals, can harm them and can even cause their death.

Ans. A trophic level is the level of species in an ecosystem on the basis of the source of nutrition such as producers, primary consumers, secondary consumers, etc.

Q2. What is the role of decomposers in the ecosystem?

Q1. What is ozone and how does it affect any ecosystem?

Ans. Ozone is a colourless gas that acts as a screen for ultraviolet radiation. It is continuously formed at the higher

levels of the atmosphere due to the action of UV rays on molecular oxygen. The high energy UV radiations break down O2 molecules into nascent oxygen.

Then, this free oxygen atom combines with an oxygen molecule to form ozone.

In recent years, the amount of ozone in the atmosphere is getting depleted.

This ozone depletion causes a greater amount of ultra violet radiation to enter earth’s atmosphere. This has an indirect effect on the ecosystem.(Ecosystem includes both the biological community and the non-living components of an area). It results in the death of many phytoplanktons, thereby affecting the process of photosynthesis. Plants utilise atmospheric CO2 to make their food. In the absence of plants, the levels of CO2 in the atmosphere will increase, which would in turn lead to an increase in global warming.

Q2. How can you help in reducing the problem of waste disposal? Give any two methods.

Ans. The problem of waste disposal can be solved by proper waste management including the collection, transport, processing, and disposal of the waste materials.

The problem of waste management can be solved by the following given measures: 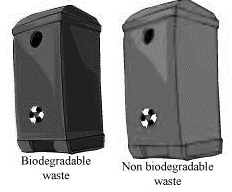 • Reduce the usage of non-biodegradable products such as plastics.

Q1. Which of the following groups contain only biodegradable items?

(a) Grass, flowers and leather

(b) Grass, wood and plastic

Q2. Which of the following constitute a food-chain?

(a) Grass, wheat and mango

(b) Grass, goat and human

Q3. Which of the following are environment-friendly practices?

(a) Carrying cloth-bags to put purchases in while shopping

(b) Switching off unnecessary lights and fans

(d) All of the above

Q4. What will happen if we kill all the organisms in one trophic level?

For example, in a food chain, if all the plants are killed, then all the deer will die due to lack of food. If all the deer are dead, then soon the tigers will also die. Due to the death of these animals, the decomposer’s population will rise in that area.

This is just an example of one food chain. However, in nature, food chains are not isolated. They are interconnected in the form of food web. Therefore, killing all the plants of an area will not only affect the deer, it will also affect other herbivores such as goat, cattle, sheep, etc.

Ans. Organisms of all trophic levels are equally important and are an integral part of the ecosystem. If all the producers are removed, then it will affect all the herbivores as it is their primary food source. Death of herbivores will soon affect the primary carnivores and so on.

Now let us suppose that all the deer (herbivores) are killed in a region. This can lead to an increase in the number of producers. At the same time, there will be an increase in the number of other herbivores such as rabbits, goat, sheep, etc. due to less competition. This will also lead to the increase in population of only consumers of these increased herbivores. Thus, the balance in the ecosystem gets disturbed if any of its component organisms are removed.

Ans. Biomagnification is the increase in the concentration of pollutants or harmful chemicals within each step of the food chain. The levels of biomagnification will be different at different trophic levels. For example, in a pond of water, DDT was sprayed and the producers were found to have 0.04 ppm concentration of DDT. Since many types of planktons are eaten by some fishes and clams, their body accumulates 0.23 ppm of DDT. Sea gull that feeds on clams accumulates more DDT as one sea gull eats many clams. Hawk, the top carnivore, has the highest concentration of DDT. 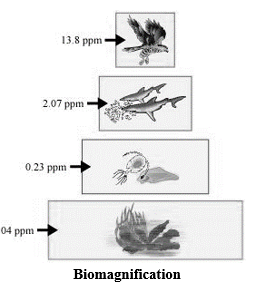 Q7. What are the problems caused by the non-biodegradable wastes that we generate?

Ans. Non-biodegradable substances affect the environment in the following ways:

(i) Since the non-biodegradable substances cannot be broken down, they get accumulated and thus contaminate the soil and the water resources.

(ii) These substances, when accidentally eaten by some stray animal, can harm them and can even cause their death.

(iv) These materials can accumulate in the environment and can also enter the food chain.

Q8. If all the waste we generate is biodegradable, will this have no impact on the environment?

Q9. Why is damage to the ozone layer a cause for concern? What steps are being taken to limit this damage?

Ans. Ozone depletion occurs widely in the stratosphere. However, it is more prominent over the Antarctic region and is known as the ozone hole. 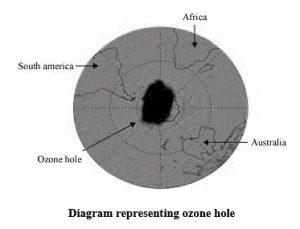 Was this article helpful to you? Yes 1 No 2