The rate of flow of charge in a circuit is called electric current. In other words, it is the amount of charge flowing per second. Denoted by letter I.

If Q is the charge which is flowing through a conductor in time t, then current is given by

Flow of Current
In metals, the moving charges are the electrons constituting the current, while in electrolytes and ionized gases, electrons and positively charged ions are the ions moving charges which constitute current.
The charge on an electron is negative and is coulomb (symbol C). Therefore, IC charge is carried by electrons. Hence if I A current flows through a conductor, it implies that electrons pass in 1 second across the cross section of the conductor.
The direction of current is conventionally taken opposite to the direction of motion of electrons.
If n electrons pass through a cross section of a conductor in time t, then total charge passed
Q = n × e and current in conductor
Instrument by which current measured:
Current is measured by an instrument called ammeter.

3.3 ELECTRIC CIRCUIT
An electric cell or dry cell is the source of energy for the bulb to glow and warm up. Let us now learn the way in which this electric energy is made available to the bulb in the torch.

Making of a Simple Electric Circuit
Step 1: Take out the bulb from bulb from a torch. Examine the bulb carefully.
The bulb is a small globe of thin glass enclosing a coiled filament supported on two thick wires. One of these thick wires is connected to the metal casing around the base of the bulb. The other wire is connected to the metal tip at the base. The metal casing and the metal tip at the base are the two terminals of the bulb. 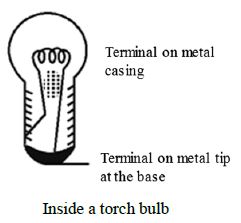 Step 3: Connect the two free ends of the wires from the bulb or the bulb holder to an electric cell in such a way that one piece of wire is connected to the positive terminals of the cell and the other to the negative terminal of the cell. This may be done with the help of a rubber band or an adhesive tape.
When you have finished with connections, the bulb lights up.
With your finger trace the path of the electricity from the positive (+ ve) terminal on the cell to the negative (–ve) terminal of the cell. It is a roundabout path travelled by electricity. 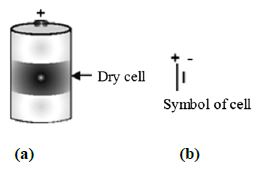 For this experiment you need a torch cell; a torch bulb marked 1.5 V, cellotape, a plastic coated 1 metre long copper wire and an old used blade.

Cut the plastic coated copper wire into two halves A and B. Remove plastic coating from each end of the wire such that 1 cm of plastic is removed. Now fix one bare end of each wire A and B to the terminals of 1.5 V bulb with the cellotape. Fix the other end of wire A to the base of cell with the help of cellotape. Now touch the bare end of wire B to the central terminal of cell as shown in figure. What do you observe?
The bulb lights up. This shows that electric current is flowing in wire A and B through the bulb.
The path along which electric current flows is called electric circuit.
Now remove the wire B from the central terminal as shown in Fig. . What do you observe? The bulb does not glow. It is because electric current does not flow, if the path is broken or path is incomplete. 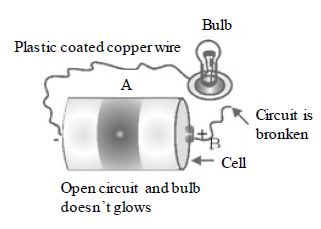 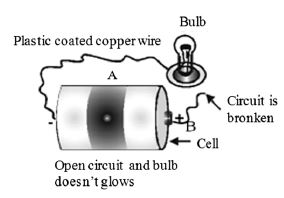 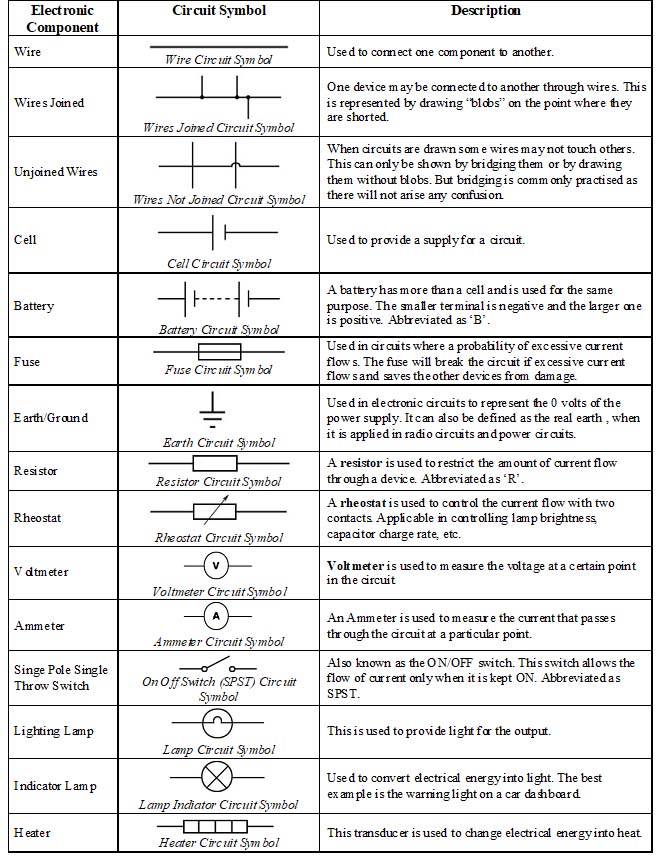 A switch, a simple device to ‘close’ or ‘open’ a circuit: An electric circuit passes through a switch. Switch is a simple device which helps us to close or open the circuit. It helps in saving electricity when not in use. You are always advised to switch ‘off the lights or other gadgets in your home to save electricity.

Connecting Electric Cells in Series
Take a dry cell and a torch bulb. Connect the bulb to the cell using copper wires as shown in Fig. . Observe the intensity- of light. The bulb does not glow brightly.

Connecting Electric Cells in Parallel
Connect one torch bulb to one cell as you did in fig. You, will observe that, the bulb toes not glow brightly. 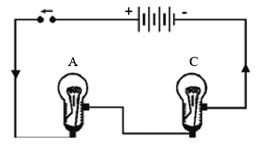 Both the bulbs will stop glowing.
Now remove the bulb B and instead fix a fused bulb C [Fig. ]. What is your observation? Bulb A does not glow. 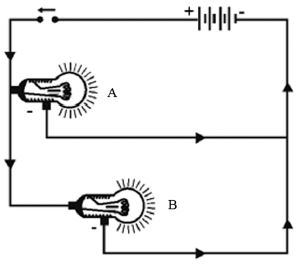 Following are the conclusions from the above investigation.
1. In series circuit all the appliances work simultaneously when switch is closed. Conversely, all appliances stop working when switch is open.
2. In series circuit, if any, of the appliances goes out of order, the other appliances stop working.
3. As the bulbs were not glowing very brightly, it can be concluded that in series the appliances do not work to their full capacity.
Now connect the bulbs A and B in parallel, such that they have common positive and common negative terminals as illustrated by Fig. , through a switch and a battery.

Close the switch. What do you observe? Both the bulbs A and B glow very brightly. Now remove the bulb B and instead fix a fused bulb C Fig. . What is your observation? 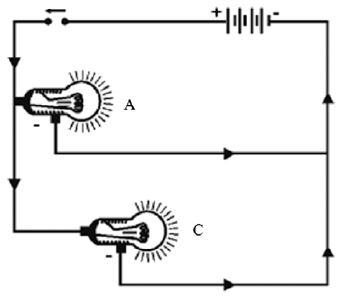 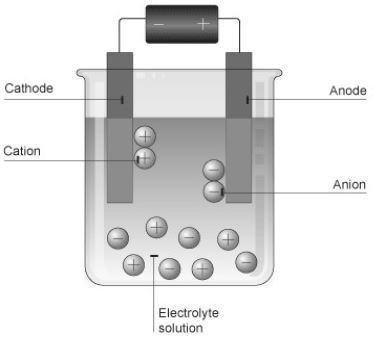 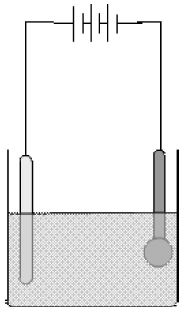 Example
Wheel rims, handle of cycle, etc. are made shiny by the method of electroplating.
Process of electroplating
In the process of electroplating, metal salt solution is taken in a container. Salt of metal is chosen which is to be coated over another metal. Metal which is to be coated is dipped in the solution and connected with negative pole. Metal for desired coating is connected with positive pole.
When electric current is passed through the solution, metal from anode is dissolved in the salt solution and  deposited over the negative pole (cathode). Thus, coating of desired metal is obtained on another metal.

Use of electroplating
(a) Water pipes, which are made of iron, are coated with a layer of zinc metal by the process of electroplating. Zinc is less reactive than iron and thus prevents the iron pipe from getting rusted.
(b) Rims of wheel of cycle, cars, etc. are electroplated with chromium metal. Layer of chromium metal give them shiny appearance and prevents from rust.
(c) Ornaments made of silver or other cheap metals are electroplated with gold to give them appearance like gold.
(d) Tin cans used for storing food are made of iron electroplating with a coat of tin. Tin is less reactive than iron, and prevent foods packed in them from getting spoiled.

Was this article helpful to you? Yes 5 No