10.1 INTRODUCTION
The circle, the square, the rectangle, the quadrilateral and the triangle are examples of plane figure; the cube, the cuboid, the sphere, the cylinder, the cone and the pyramid are the examples of Solid Shapes. Plane figures are of two dimensions (2–D) and the solid shapes are of three-dimensions (3–D). Three dimensional objects is that they all have some length, breadth and height or depth. That is, they all occupy space and have three dimensions. In this chapter, we learn about various three-dimensional objects.
Match the shape with the name

Sol : After matching the shape with their names are as follow

Match the 2 dimensional figures with the names

Sol : After matching figures with their names are as the follow :

Perspectives (Views) of 3-D Shapes
Let us view a brick from front, side and top. How do they look like ?
They look like this :

For each of the given solid shapes, the three views are given : 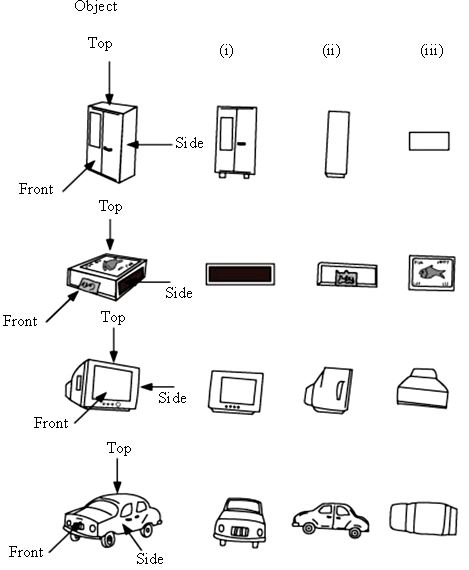 What can we conclude from the above illustration? When we draw a picture, we attempt to represent reality as it is seen with all its details, whereas, a map depicts only the location of an object, in relation to other objects. Secondly, different persons can give descriptions of pictures completely different from one another, depending upon the position from which they are looking at the house. But, this is not true in the case of a map. The map of the house remains the same irrespective of the position of the observer. In other words, perspective is very important for drawing a picture but it is not relevant for a map.
Now, look at the adjacent map, which has been drawn by seven year old Raghav, as the route from his house to his school : 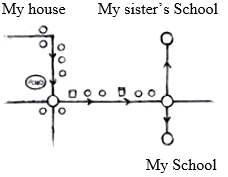 From this map, can you tell –
(i) how far is Raghav’s school from his house ?
(ii) would every circle in the map depict a round about ?
(iii) whose school is nearer to the house, Raghav’s or his sister’s ?
It is very difficult to answer the above questions on the basis of the given map. Can you tell why ?
The reason is that we do not know if the distances have been drawn properly or whether the circles drawn are roundabouts or represent something else. Now look at another map drawn by his sister, ten year old Meena, to show the route from her house to her school. This map is different from the earlier maps. Here, Meena has used different symbols for different landmarks. Secondly, longer line segments have been drawn for longer distances and shorter line segments have been drawn for shorter distances, i.e., she has drawn the map to a scale. 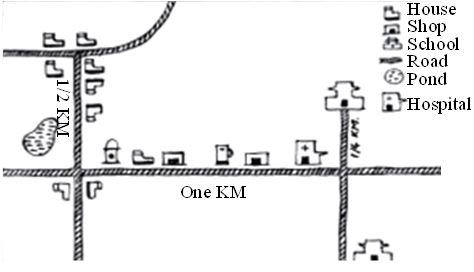 Now, you can answer the following questions :
1. How far is Raghav’s school from his residence ?a
2. Whose school is nearer to the house, Raghav’s or Meena’s ?
3. Which are the important landmarks on the route ?
Thus we realise that, use of certain symbols and mentioning of distances has helped us read the map easily. Observe that the distances shown on the map are proportional to the actual distances on the ground. This is done by considering a proper scale. While drawing (or reading) a map, one must know, to what scale it has to be drawn (or has been drawn), i.e., how much of actual distance is denoted by 1mm or 1cm in the map. This means, that if one draws a map, he/she has to decide that 1cm of space in that map shows a certain fixed distance of say 1 km or 10 km. This scale can vary from map to map but not within a map.
For instance, look at the map of India alongside the map of Delhi.
You will find that when the maps are drawn of same size, scales and the distances in the two maps will vary. That is 1 cm of space in the map of Delhi will represent smaller distances as compared to the distances in the map of India.
The larger the place and smaller the size of the map drawn, the greater is the distance represented by 1 cm.
Thus, we can summarise that :
1. A map depicts the location of a particular object/place in relation to other objects/places.
2. Symbols are used to depict the different objects/places.
3. There is no reference or perspective in map, i.e., objects that are closer to the observer are shown to be of the same size as those that are farther away. For example, look at the following illustration.

4. Maps use a scale which is fixed for a particular map. It reduces the real distances proportionately to distances on the paper.
Example 1. A map is given showing some landmarks of a city. The landmarks are replaced by symbols, whose meanings are given on right side of the map.
Answer the following questions.
(1) Ankit lives in the house H. How far is Ankit’s house from the school ?
(2) Which is nearby from Ankit’s house, stadium or hospital ? 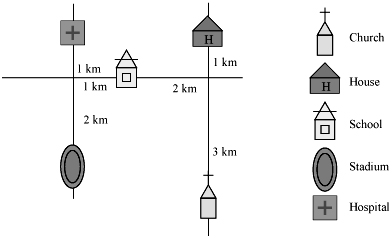 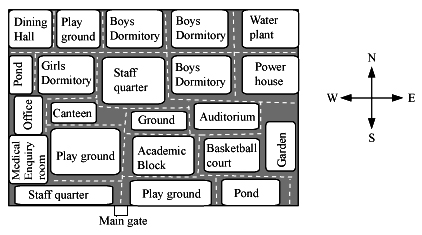 Solution.
(i) It can be clearly seen in the map that boys dormitory is nearer to girls dormitory as compared to academic block, auditorium, and power house.
(ii) The North West corner of the school compound in the given map is the dining hall.
Example 3.
The given figure shows the map of a locality which is drawn on a centimetre grid paper.
What is the shortest distance between the hospital and the post office ? 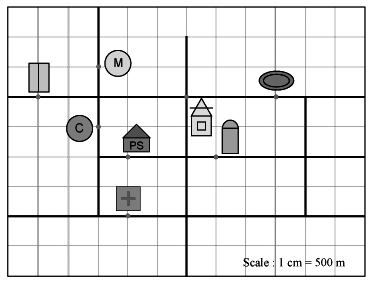 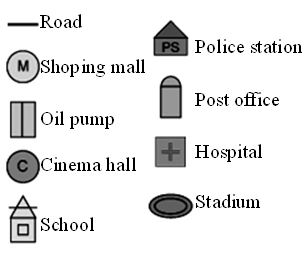 Solution. It can be seen in the map that there are two ways of reaching the post office from the hospital and the shortest is the one which is shown by blue arrows. 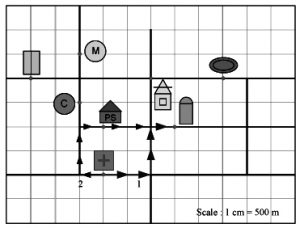 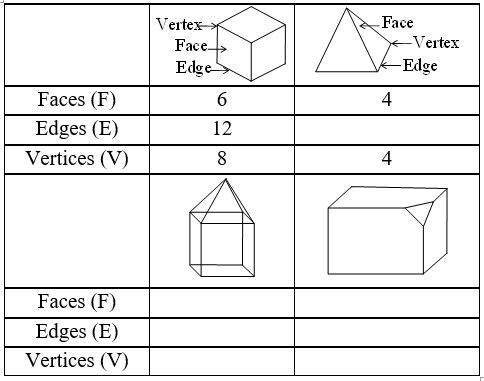 Polyhedron Let us look at the following solid figures.

Polyhedra are named according to the number of faces. For example: tetrahedron (4 faces), pentahedron (5 faces), hexahedron (6 faces) and so on. The first figure is the figure of a tetrahedron. The second figure is an octahedron. Now, what can we say about the solids like cylinders, cones, spheres etc.?

These solids have lateral surfaces as well as curved edges. It means that these solids are not formed strictly with only flat surfaces as well as straight edges. Therefore, we can say that the solids like cylinders, cones and spheres are not polyhedrons.
We can classify polyhedrons into different categories. Let us discuss them one by one.
A polyhedron may be a regular or an irregular polyhedron.
A polyhedron is said to be regular if it satisfies two conditions which are given as follows.
(a) Its faces are made up of regular polygons.
(b) The same number of faces meets at each vertex.
If the polyhedron does not satisfy any one or both of the above conditions, then we can say that the polyhedron is irregular. To understand this concept, let us consider two solids, i.e. a cube and a hexahedron, as shown below. 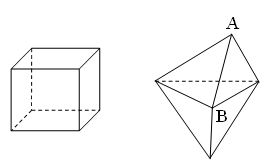 Thus, at least four faces are required to make a polyhedron.
Prism and Pyramid
Two important members of polyhedron family around are prisms and pyramids.

We say that a prism is a polyhedron whose base and top are congruent polygons and whose other faces, i.e., lateral faces are parallelograms in shape.
On the other hand, a pyramid is a polyhedron whose base is a polygon (of any number of sides) and whose lateral faces are triangles with a common vertex. (If you join all the corners of a polygon to a point not in its plane, you get a model for pyramid).
A prism or a pyramid is named after its base. Thus a hexagonal prism has a hexagon as its base; and a triangular pyramid has a triangle as its base. What, then, is a rectangular prism? What is a square pyramid? Clearly their bases are rectangle and square respectively.
Example 6. Identify whether the polyhedron shown in the following figure is a prism or a pyramid and name it accordingly.

Was this article helpful to you? Yes 2 No 2