Highest Calorific Value
Hydrogen as a fuel may be considered as the best fuel since its calorific value is the highest and it is a non-pollutant. On burning it gives out only water vapour. However, its transport, storage and handling is difficult hence not very useful as domestic or industrial fuel. It is used as a fuel in rockets and that too in liquid form. Another problem with hydrogen is that it explodes when it gets mixed with air and is ignited. In the space temperature being low, hydrogen remains in liquid form and there being no atmosphere in the space there is no risk of getting hydrogen mixed with air.
4.7 NATURAL RESOURCES OF FUELS
Wood and charcoal come from plants. Their availability is highly limited. These fuels are air pollutants and their calorific value is also low. Hence, they are not considered as good fuels. Fossil fuels are coal from mines, petroleum and natural gas.
Fossil fuels were formed over a period of millions of years from the remains of plants and animals that got buried.
Hence they are called fossil fuels.
(a) Coal
Coal is also a fossil fuel. It is mined. It is of different grades depending upon the carbon contents in each. It is a pollutant fuel hence used in industry or for the generation of electricity in thermal plants.
(b) Petroleum and Natural Gas
Petroleum is crude oil, which is a mixture of solids, liquids and gaseous hydrocarbons. Crude is refined to obtain asphalt, paraffin wax and lubricating oils, gasoline or aviation oil, diesel (heavy oil), kerosene, petrol, petroleum gas and natural gas.
(c) Petroleum Gas
Petroleum gas is obtained from petroleum. This gas is a mixture of butane with small quantities of propane and ethane. All the three are hydrocarbons.
When stored under high pressure it liquefies at room temperature. It is commonly available as cooking gas in cylinders under the name of LPG (liquefied petroleum gas). LPG has no smell of its own hence a strong smelling liquid called ethyl mercaptan is added to it for its easy detection on leakage.
(d) Natural Gas
Natural gas is the gas coming out of petroleum wells and is a part of the fossil fuel. It is mainly methane. It is supplied as domestic fuel through pipes.
(e) CNG
Compressed Natural Gas (CNG) is natural gas stored under high pressure. It has a high calorific value and is used as fuel in automobiles. All these fuels come from fossil fuels hence their resource is limited and is exhaustible.
(f) Biogas or Gobar gas
Biogas or gobar gas is a mixture of gases obtained from the decay and fermentation of animal dung and farm waste. It includes gases like methane, hydrogen, hydrogen sulphide and carbon dioxide. The mixture is used as a fuel. It has a good calorific value and is a fuel which burns at a steady rate. It comes from inexhaustible natural resource or renewable resource.
(g) Alcohol or Spirit
Alcohol or spirit (ethanol), most of which is prepared by fermentation of waste sugar and foods is also a fuel. It cannot be used directly except for in a spirit lamp. It is partly mixed with petrol and is used as automobile fuel.
Dung cake, firewood, straw, husk, and coal are polluting fuels with low calorific value hence not good as fuel.
4.8 GOOD FUEL
A Good Fuel Should be
1. Readily available
2. Cheap, should be available at a reasonable price
3. Should have a good calorific value (energy giver)
4. Could be easily ignited (low ignition temperature)
5. Should burn at a steady rate
6. Release heat in a controlled manner
7. Could be ignited and put off easily
8. Easy to transport from one place to another
9. Safe in handling
10. Should not produce wastes like ash
11. Should not cause pollution, no smoke (soot) or other poisonous gases
12. Safe to store.
Burning of Fuels Leads to Harmful Products
1. Carbon fuels like wood, coal, petroleum release unburnt carbon particles. These fine particles are dangerous pollutants causing respiratory diseases, such as asthma.
2. Incomplete combustion of these fuels gives carbon monoxide gas. It is a very poisonous gas. It is dangerous to burn coal in a closed room. The carbon monoxide gas produced can kill persons sleeping in that room.
3. Combustion of most fuels releases carbon dioxide in the environment. Increased concentration of carbon dioxide in the air is believed to cause global warming.
4. Burning of coal and diesel releases sulphur dioxide gas. It is an extremely suffocating and corrosive gas.
Moreover, petrol engines give off gaseous oxides of nitrogen. Oxides of sulphur and nitrogen dissolve in rain water and form acids. Such rain is called acid rain. It is very harmful for crops, buildings and soil.
4.9 FLAME
A wax candle burns with a yellow flame. The domestic gas burners when lighted burn with a blue flame. What is this flame ? 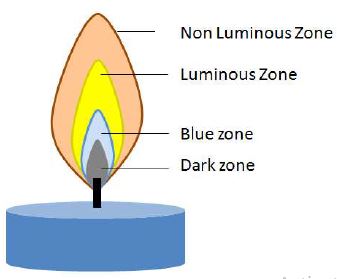 Zones of a Flame
A region of burning gases is called a flame. Light a wax candle and watch its flame. Carefully note the different coloured zones in the flame. Starting from the base of the flame, a flame has four zones.
It is near the base of the flame. Vapourised wax gets oxidised and burns completely with a blue flame in this zone.
Dark Zone
Surrounding the wick is the Dark zone. There is no burning in this zone. If we pass a wooden splinter through the dark zone of the flame, it comes out unburnt showing that there is no ‘burning’ in this zone.
Luminous Zone
In this zone, hydrogen burns with a brilliant yellow luminous flame. Burning hydrogen combines with oxygen to form water vapour. Carbon also burns in this zone giving some luminosity to the flame and producing carbon dioxide. Some unburnt carbon particles are left which give rise to soot.
Non Luminous Zone
This zone is poorly visible and is slightly blue. It is the hottest part of the flame where complete oxidation (burning) of the fuel takes place.
Points to be Noted
Luminous zone of a flame is mainly due to incomplete burning of carbon. In the case of fuel gas (LPG or CNG) there is no soot formation. The gases burn with a blue flame oxidising hydrocarbons completely. Non-luminous flame is accompanied with heat but very little light. It has more heat than light. Fuel is completely burnt in non-luminous flame without leaving any residue.
Colour of the Flame
Colour of the flame changes with the supply of oxygen to it.
i) Non-luminous flame is accompanied with heat but very little light. It hotter than light. The flame is yellow with red when oxygen supply is not sufficient.
ii) The flame is yellow when oxygen supply is poor. In case your gas stove is burning with a BLUE FLAME then it shows that . . .
(a) the burner is clean
(b) sufficient oxygen is available to the fuel on fire, and
(c) there is complete burning of the fuel.
(iii) In case your gas stove is burning with a YELLOW FLAME OR YELLOW RED then it shows that . . .
(a) the burner needs cleaning,
(b) heat given out by the flame is lower than that of the blue flame, and
(c)there is incomplete burning of the fuel leaving behind some residue (unburnt carbon).
4.10 WICKS IN THE LAMPS
What is a wick ? Wick is a loosely twisted thread made from absorbent fibre, which is generally cotton or a spongy material. One end of the wick in a lamp is kept dipped in the liquid fuel, the other end is kept free in the air.
The free end of the wick is also soaked in oil or the fuel and is lighted. The wick gets heated and the fuel vapourises. It is the vapour from the fuel that catches fire and bears the flame. The wick being made of absorbent material absorbs the liquid fuel and the fuel rises into the wick along the absorbent walls of the fibre.
This maintains a regular supply of the liquid fuel to the flame. In all cases liquid fuel vapourise and it is the vapour that are inflamed.
Wicks in Different Fuels
Wick is Placed Differently in Different Fuels
1. The spirit and kerosene lamps are so made that the free end of the wick with flame totally remains cut off (separated) from the fuel since the fuel is vapourised at room temperature and is highly inflam-mable
2. Wick in a vegetable oil lamp remains uncovered except that it is partly under the oil (fuel). In a vegetable oil lamp, wick soaked in oil remains exposed to the flame so as to vapourise the oil and keep the flame going.
3. Wick in a wax candle is surrounded all round with wax. The flame melts the wax below. The molten wax rises.