7.1. INTRODUCTION
All living organisms have an instinct to live their own lives and then survive through their generations. Living things take birth, grow old and die. Before death individuals give birth to the off springs (children) to continue their race. Have you ever provoked you mind to know the process that leads to off springs ? The answer is right here . . .
This survival instinct is helped by the process of Reproduction.
Giving birth to off springs, which are similar to parents, is known as reproduction.
Importance of Reproduction
Reproduction is one of the most important characteristics of life. Reproduction is the creation of new life of its own kind. Reproduction is essential for the continuation of species. A species will disappear from the face of the earth if it does not reproduce. Reproduction takes place in both, plants and animals.
MODES OF REPRODUCTION
7.2. ASEXUAL REPRODUCTION
In asexual reproduction, a single parent gives rise to new individuals. Binary fission in Amoeba and Budding in Hydra are Asexual reproductions.
Binary Fission
The asexual reproduction in which nucleus of the parent splits into two and gives rise to two new individuals, is called Binary Fission.
Eg : Amoeba, paramecium, Euglena, etc.
Binary Fission in Amoeba
1. Amoeba, the unicellular organisms, multiplies by binary fission.
2. First, the nucleus divides into two.
3. Then, the body cell divides into two parts, each part receiving a nucleus.
4. Each with a single nucleus separates out into two independent amoebae.

Budding in Hydra
1. Hydra is a multicellular organism with a soft cylindrical body.
2. It bears tentacles surrounding its mouth towards the top.
3. For reproduction by budding, one or more buds bulge from its lateral sides.
4. Each bud grows into a baby hydra.
5. Baby hydra separates out from the parent forming an independent hydra.

7.3. SEXUAL REPRODUCTION
Look around and see for the young ones from different animals. Kitten, puppy, chick and calf some of the common young ones from different animals. Have you ever wondered as to how babies are born ? The babies are the result of Sexual Reproduction.
A mode of reproduction involving the fusion of female gamete and male gamete, which forms a zygote that potentially develops into genetically distinct offspring is called Sexual Reproduction
Oviparous & Viviparous Animals
The animals that lay eggs to produce young ones are called Oviparous Animals.
Examples : Insects, frogs, snakes, turtles and birds lay eggs.
Viviparous Animals
The animals that give birth to young ones are called Viviparous Animals.
Examples : Cat, dog, cow, man and elephant give birth to young ones.
Note : All mammals (milk yielding animals) give birth to young ones.
7.4 HUMAN REPRODUCTIVE SYSTEM
In humans, male and female reproductive parts are present in separate individuals.
Male Reproductive Organs
Male human reproductive organs contain :
– A pair of testes (singular—testis), two sperm duct and a penis.
– The testes produce the male gametes called sperms.
– The sperm ducts carry sperms to the penis.
– The penis is used for ejecting sperms and also passing urine. The tail in sperm helps in movement of the sperm to reach the egg in the female sex organs.
– Human Sperm : A sperm is unicellular (single celled), has a head, a middle piece and a tail. 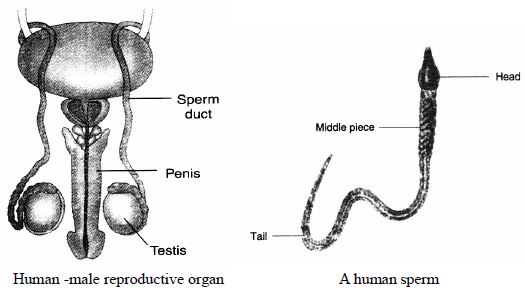 Female Reproductive Organs
Female human reproductive organs contain :
– A pair of ovaries which produce female gametes called ova (eggs).
– Oviduct (fallopian tubes) : A single matured egg is released into the oviduct by one of the ovaries every month.
– Uterus : Uterus is the part where development of the baby takes place.
– Egg (ovum) : Like a sperm, an egg is also a single cell. It contains a nucleus and the cytoplasm. The egg may be very small as in humans, much larger a ducks and hens. Ostrich egg is the largest. 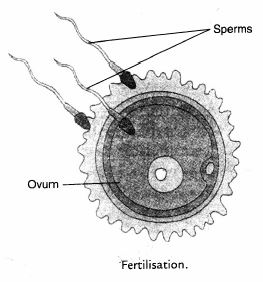 7.5 FERTILISATION
The fusion of a sperm with an egg is called fertilisation. During fertilisation, the nuclei of the sperm and the egg fuse to form a single nucleus. This results in the formation of a fertilised egg called Zygote.
Types of Fertilisation
• Internal Fertilisation : Fertilisation which takes place inside the body of the female is called internal fertilisation.
For example : as in humans, dogs, cows, birds etc.
• External Fertilisation : Fertilisation which takes place outside the body of the female is called external fertilisation. It is very common in aquatic animals, such as fish, starfish and amphibians (animals who live in water as well as on land such as frogs).
• IVF or in vitro Fertilisation : The fertilisation of an egg that takes place outside the body in a test tube or in any other apparatus is known IVF or in vitro fertilisation.
• Test Tube Babies : In this technique freshly released egg and sperms are put together for a few hours for IVF. In case fertilisation occurs, the zygote allowed to develop for about a week and then placed in the uterus of the mother. Complete development takes place in the uterus and the baby is born like any other normal baby. The term test tube babies is misleading, because babies cannot grow in test tubes.
• Embryo : The stage, when cells produced by the division of the zygote begin to form groups that develop into different tissues and organs of the body, is termed an embryo.
• Foetus : The stage of embryo in which all the body parts can be identified is known as foetus.
REPRODUCTION IN OVIPAROUS ANIMALS
All egg laying animals are called oviparous animals. Insects, worms, frog, etc. are oviparous animals. We have already learnt about the lifecycle in some of the animals. Let’s study the life cycle of few of the oviparous animals.
7.6. LIFE CYCLE OF BUTTERFLY
In butterfly male and female are separate. The female lays the eggs. The eggs laid are actually zygotes. The eggs are fertilized within the body of the mother (female) with the sperms from father (male). Fertilization in butterfly (insects) is internal.
Eggs (zygotes)  Larva Pupa  Adult
7.7. LIFE CYCLE OF SILKWORM MOTH 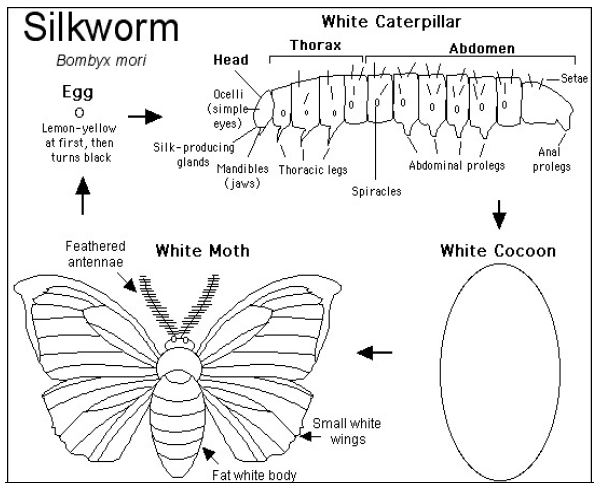 7.8. LIFE CYCLE OF MOSQUITO
• Larva or caterpillar in mosquito is popularly called Wriggler since it is seen going down and coming up in pond water in which they develop.
• They come up to the surface for breathing.
• Pupa in mosquito is seen as if suspended from the water surface.
• They breathe through minute tubes coming out of water into the air. 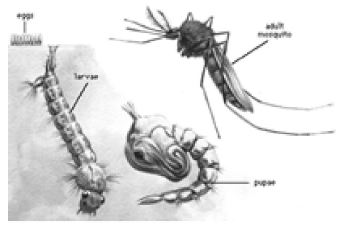 7.9. REPRODUCTION IN TOADS AND FROGS
Toads and frogs are common near a pond during early rains. Late in the rainy season or in the beginning of winter the male frog which is smaller and dark seeks the company of a big female frog. The female is fat with her belly full of eggs.
Both, male and female frogs swim around the pond for some time and then they come near the shore where the female starts laying eggs. The big mass of eggs emerge from the body of the female, the male sheds sperms over them. Sperms swim to the eggs.
Fusion of a sperm with an egg is called fertilization
During fertilization, One sperm fuses with one egg (ovum) to form Zygote.
Note :
1. Fertilization in frog takes place in water.
2. Fertilization in frog is EXTERNAL (outside the body of the mother).
3. The fertilized eggs are enclosed by a thick jelly.
4. The whole mass of zygotes in a jelly is called spawn. 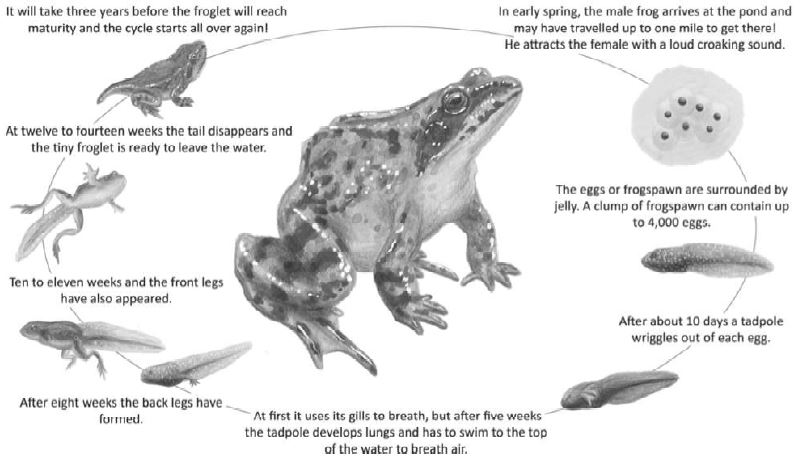 Some points to be noted
1. The tadpole stage in frog is an intermediate stage between aquatic and land habitat.
2. Tadpole has gills for breathing under water and finned tail to swim in water.
3. Adult frog has lungs for breathing in air.
4. In addition to lungs frogs also breathe through their moist skin.
The changes taking place through stages during the development of an animal from an egg to an adult is called metamorphosis.
In tadpoles secretion of hormone thyroid initiates metamorphosis.
7.10. REPRODUCTION IN BIRDS
Hen and cock represent the birds. Chick or chickens come from hen. Hen is an oviparous animal.
It lays eggs. The eggs are fertilized internally before laying.
Note : In case cocks (male hen) are not around, he eggs laid by a hen are not fertilized. 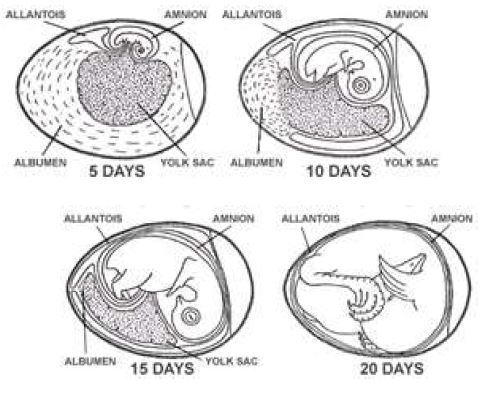 7.11. CLONING
i. Cloning is induced (artificial) asexual reproduction.
ii. Cloning is the forming of a baby from a body cell.
iii. In the process of cloning, egg or ovum from a black faced female sheep ‘A’ was taken out of its womb.
iv. Its nucleus was replaced with a nucleus from a ‘baby cell’ taken from the mammary gland of another white faced female sheep ‘B’.
v. This cell with changed nucleus is implanted onto the womb of sheep ‘A’, where it developed into a normal baby sheep.
vi. The baby thus born was found to be exactly similar to the sheep ‘B’ and it is termed a ‘clone’.
vii. The clone had no similarities with the sheep ‘A’ in whose womb it developed.
viii. It resembled the white faced sheep ‘B’ from whom the nucleus from its body cell was obtained.
ix. The clone was named ‘Dolly’. 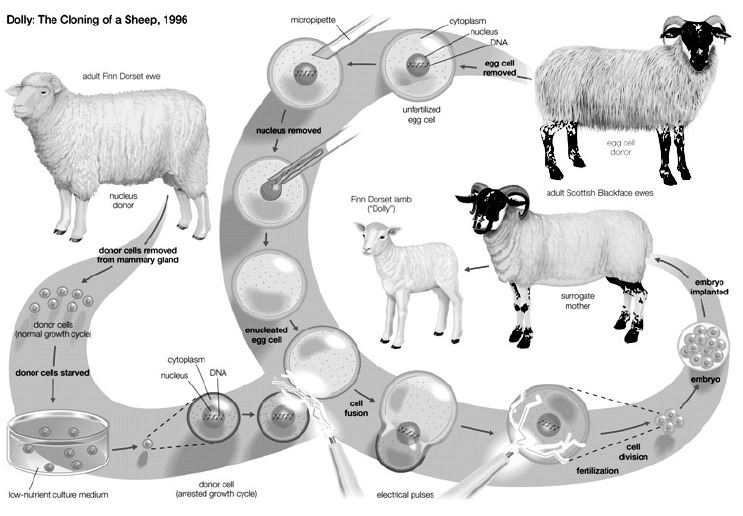 Was this article helpful to you? Yes 2 No 2