(Hint: A regular hexagon has all its six sides equal in length.) 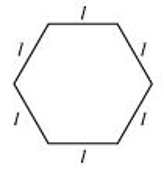 This can be done for any three numbers. This property is known as the associativity of addition of numbers. Express this property which we have already studied in the chapter on whole numbers, in a general way, by using variables a, b and c.

(b) Form expressions using y, 2 and 7. Every expression must have y in it. Use only two number operations. These should be different.

(a)   Take Sarita’s present age to be y years

(iii)     Sarita’s grandfather is 6 times her age. What is the age of her grandfather?

(iv)      Grandmother is 2 years younger than grandfather. What is grandmother’s age?

(b)   The length of a rectangular hall is 4 meters less than 3 times the breadth of the hall. What is the length, if the breadth is b meters?

(c)   A rectangular box has height h cm. Its length is 5 times the height and breadth is 10 cm less than the length. Express the length and the breadth of the box in terms of the height.

(For example, Given Salim scores r runs in a cricket match, Nalin scores

(e)   In an arrangement of dots there are r rows. Each row contains 5 dots.

(b)   Given Sara’s age today to be y years. Think of her age in the future or in the past.

What will the following expression indicate?

(c)   Given n students in the class like football, what may 2n show? What may show? (Hint: Think of games other than football).

(b)   Complete the table and by inspection of the table, find the solution to the equation 5t = 35.

(c)   Complete the table and find the solution of the equation z/3 = 4 using the table.

Thrice and no more!

Add the count to me

To get exactly thirty four!

Make an upcount from me

If you make no mistake

You will get twenty three!

Take away from me a six!

You will still be able to fix!

I shall give a pretty clue!

You will get me back

If you take me out of twenty two!

Was this article helpful to you? Yes No 3