For example, Indira Gandhi Canal originating from Bhakra Dam has brought greenery to considerable areas of Rajasthan.
Water from a dam is supplied to the people in towns and cities through pipelines after suitable treatment. In this way, construction of dams ensures continuous water supply in the region.
The falling water from the dam is used for generating electricity. The water rushing down the dam turns turbines which run electric generators. The electricity thus produced is called hydroelectricity.
The construction of high-rise dams for the management of river water and generation of electricity has certain problems associated with it. The public opposition to the construction of large dams on rivers is mainly due to the following three problems likely to be created by them:
(i) Social Problems
Due to the construction of high-rise dams, a large number of human settlements are submerged in the water of large reservoir formed by the dam and many people are rendered homeless. This creates a social problem. It is, therefore, necessary that all the people who are displaced from the dam site are given adequate compensation by the Government for rehabilitation so as to start their life afresh.
(ii) Environmental Problems
The construction of high-rise dams on the rivers contributes to deforestation and loss of biodiversity. This is because a vast variety of flora and fauna get submerged in the water of large reservoir formed by the dam and disturb the ecological balance.
(iii) Economic Problems
Some people say that the construction of high-rise dams involves the spending of huge amount of public money without the generation of proportionate benefits. On the other hand, others say that there can be no real progress without building dams because they allow us to manage our water resources properly
and at the same time give us much needed electricity. So, whether the construction of dams on rivers is an economic problem or not is a debatable question.
The opposition to the construction of Tehri Dam on the river Ganga and raising the height of Sardar Sarovar Dam on the river Narmada are due to such problems. We have all heard about the protests by the Narmada Bachao Andolan against the raising of height of Sardar Sarovar Dam. So, before taking a decision to construct high-rise dams on rivers, or raising the height of existing dams, it is necessary to consider its long term effects on social life and environment carefully.
5. Pollution of River Water
The water in most of our rivers is highly polluted. The pollution of river water is caused by the dumping of untreated sewage and industrial wastes into it. For example, the river Ganga which flows for over 2500 kilometres from Gangotri in the Himalayas to Ganga Sagar in the Bay of Bengal is being turned into a dirty water drain by the discharge of untreated sewage and industrial wastes emanating from more than a hundred towns and cities which lie along its way. In addition to sewage and industrial wastes, the pollution of river Ganga is also caused by other human activities like bathing, washing of clothes, immersion of ashes of the dead and dumping of unburnt corpses in its water. The industries also discharge chemical effluents into the river water. The toxicity of these chemical effluents kills the fish in many parts of the river.
The contamination of river water can be usually found from two factors: (i) the presence of coliform bacteria in river water, and (ii) measurement of pH of river water. Coliform is a group of bacteria found in human intestines. The presence of coliform in the river water indicates its contamination by disease-causing micro-organisms. This is because though coliform itself is harmless but its presence in river water indicates that other, more harmful, intestinal bacteria might also be present. The pH of river water is measured by using universal indicator paper. If the pH of river water is found to be below 7, then the river water will be acidic and hence polluted. A multicrore ‘Ganga Action Plan’ (GAP) project was launched in 1985 to clean the river Ganga and make its water pollution free.
Wells and tube-wells are yet another source of water. Some of the rainwater which falls on earth seeps through the soil and goes down under the surface of the earth. Ultimately this water is stopped by some hard rocks and collects there. This underground water is taken out by digging a ‘well’ into the ground. This is called well water. Such wells are a common sight in village areas. The deep tube-wells called ‘bore-wells’ are also dug into the earth which are much deeper than the ordinary wells and their water is drawn out by using water pumps. This water is used for the irrigation of crops and for drinking purposes.
When too much water is pumped out through deep tube-wells then the water table gets lowered too much. This lowering of water table decreases the amount of available underground water. In order to maintain the water table at a proper depth, it is necessary to ensure better percolation of rainwater into the soil. A scheme called ‘rainwater harvesting’ is recommended to stop flowing rainwater and make it percolate into the soil more efficiently.
6. Rainwater Harvesting
The people in rural India have used a large number of water collecting methods to capture as much rainwater as possible which had fallen on their land. Some of the methods used for water harvesting by the rural people were: Digging of small pits and lakes; Building of small earthen dams; Construction of dykes; Construction of sand and limestone reservoirs; and setting up of roof-top water collecting units. All these methods of collecting and saving rain water have recharged the depleting groundwater levels.

Rainwater harvesting is an age-old practice in India. Water-harvesting techniques used depend on the location where it is to be used. Some of the ancient ‘water harvesting structures’ used in different rural regions of our country are given below: 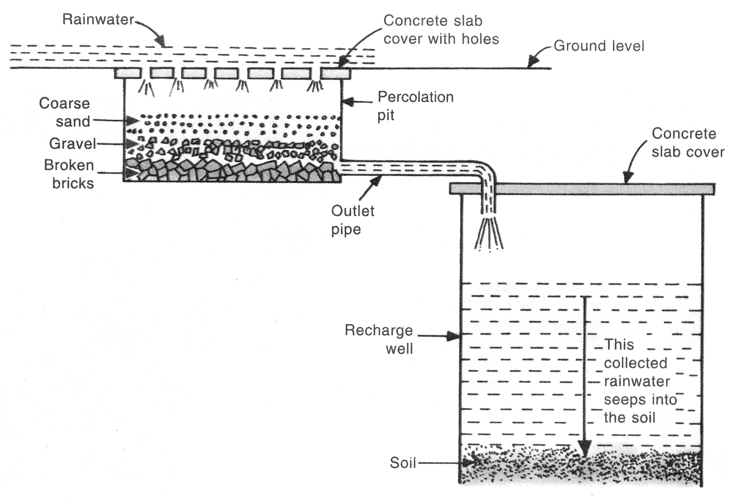