Q1. Why do we classify organisms?

Q2. Give three examples of the range of variations that you see in life-forms around you.

Ans. Examples of range of variations observed in daily life are:

(i) Variety of living organisms in terms of size ranges from microscopic bacteria to tall trees of 100 metres.

(ii) The colour, shape, and size of snakes are completely different from those of lizards.

(iii) The life span of different organisms is also quite varied. For example, a crow lives for only 15 years, whereas a parrot lives for about 140 years.

Q1. Which do you think is a more basic characteristic for classifying organisms?

(a) The place where they live.

(b) The kind of cells they are made of. Why?

Q2. What is the primary characteristic on which the first division of organisms is made?

The primary characteristic on which the first division of organisms is made is the nature of the cell. It is considered to be the fundamental characteristic for classifying all living organisms. Nature of the cell includes the presence or absence of membrane-bound organelles. Therefore, on the basis of this fundamental characteristic, we can classify all living organisms into two broad categories of eukaryotes and prokaryotes. Then, further classification is made on the basis of cellularity or modes of nutrition.

Q3. On what basis are plants and animals put into different categories?

Q1. Which organisms are called primitive and how are they different from the so-called advanced organisms?

Q2. Will advanced organisms be the same as complex organisms? Why?

It is not always true that an advanced organism will have a complex body structure. But, there is a possibility that over the evolutionary time, complexity in body design will increase. Therefore, at times, advanced organisms can be the same as complex organisms.

Q1. What is the criterion for classification of organisms as belonging to kingdom Monera or Protista?

Q2. In which kingdom will you place an organism which is single-celled, eukaryotic and photosynthetic?

Q1. Which division among plants has the simplest organisms?

Thallophyta is the division of plants that has the simplest organisms. This group includes plants, which do not contain a well differentiated plant body. Their body is not differentiated into roots, stems, and leaves. They are commonly known as algae.

Q2. How are pteridophytes different from the phanerogams?

Q3. How do gymnosperms and angiosperms differ from each other?

Q1. How do poriferan animals differ from coelenterate animals?

Q2. How do annelid animals differ from arthropods?

Q3. What are the differences between amphibians and reptiles?

Q4. What are the differences between animals belonging to the Aves group and those in the mammalia group?

Q1. What are the advantages of classifying organisms?

There are a wide range of life forms (about 10 million-13 million species) around us. These life forms have existed and evolved on the Earth over millions of years ago. The huge range of these life forms makes it very difficult to study them one by one. Therefore, we look for similarities among them and classify them into different classes so that we can study these different classes as a whole. This makes our study easier.

(i)  It determines the methods of organising the diversity of life on Earth.

(ii)  It helps in understanding millions of life forms in detail.

(iii)  It also helps in predicting the line of evolution.

Q2. How would you choose between two characteristics to be used for developing a hierarchy in classification?

Q3. Explain the basis for grouping organisms into five kingdoms.

The basis for grouping organisms into five kingdoms is as follows:

(i) On the basis of the presence or absence of membrane-bound organelles, all living organisms are divided into two broad categories of eukaryotes and prokaryotes. This division lead to the formation of kingdom Monera, which includes all prokaryotes.

(iii) Animals are then separated on the basis of the absence of a cell wall. 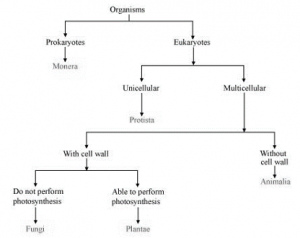 Q4. What are the major divisions in the Plantae? What is the basis for these divisions?

The kingdom Plantae is divided into five main divisions:

The classification depends on the following criteria:

(iii) Tracheophyta is again sub-divided into division Pteridophyta, on the basis of the absence of seed formation.

(iv) The other group of plants having well developed reproductive organs that finally develop seeds are called Phanerogams. This group is further sub- divided on the basis of whether the seeds are naked or enclosed in fruits. This classifies them into gymnosperms and angiosperms. Gymnosperms are seed bearing, non-flowering plants, whereas angiosperms are flowering plants in which the seeds are enclosed inside the fruit. 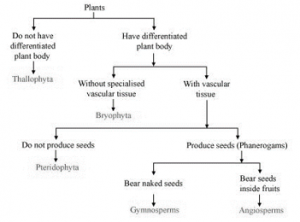 Criteria for deciding divisions in plants are:

Criteria for deciding subgroups among animals are:

Kingdom Animalia is divided into two major groups on the basis of the presence or absence of a notochord.

Non-chordate is further divided into subgroups on the basis of the following features: 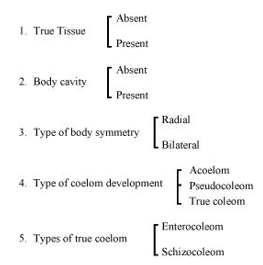 On the basis of the above features, non-chordates are divided into the following subgroups: Porifera, Coelenterate, Platyhelminthes, Nematodes, Annelids, Molluscs, Arthropoda, and Echinodermata.

All members of the phylum chordate possess a notochord. However, some animals such asBalanoglossus, Amphioxus, Herdmania, etc. have a notochord, which is either absent or does not run the entire length of the animal’s body. Therefore, these animals are kept in a separate sub-phylum called Protochordata, and the rest of the chordates are included in the sub-phylum vertebrata. The members of the sub-phylum vertebrata are advanced chordates. They are divided into five classes: Pisces, Amphibian, Reptilia, Aves, and Mammalia. 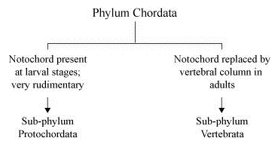 Q6. Explain how animals in Vertebrata are classified into further subgroups.

Animals in Vertebrata are classified into five classes: 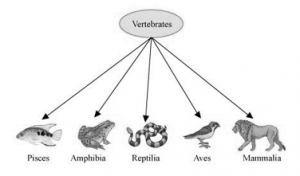 (i) Class Pisces: This class includes fish such as Scoliodon, tuna, rohu, shark, etc. These animals mostly live in water. Hence, they have special adaptive features such as a streamlined body, presence of a tail for movement, gills, etc. to live in water.

(ii) Class Amphibia: It includes frogs, toads, and salamanders. These animals have a dual mode of life. In the larval stage, the respiratory organs are gills, but in the adult stage, respiration occurs through the lungs or skin. They lay eggs in water.

(iii) Class Reptilia: It includes reptiles such as lizards, snakes, turtles, etc. They usually creep or crawl on land. The body of a reptile is covered with dry and cornified skin to prevent water loss. They lay eggs on land.

(iv) Class Aves: It includes all birds such as sparrow, pigeon, crow, etc. Most of them have feathers. Their forelimbs are modified into wings for flight, while hind limbs are modified for walking and clasping. They lay eggs.

(v) Class Mammalia: It includes a variety of animals which have milk producing glands to nourish their young ones. Some lay eggs and some give birth to young ones. Their skin has hair as well as sweat glands to regulate their body temperature.