Nature of the quantity: Even though force and displacement are vectors, work is a scalar quantity. Work is independent of time. 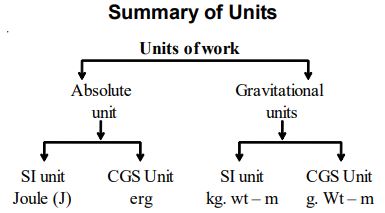 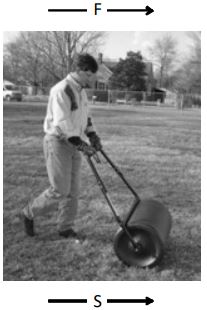 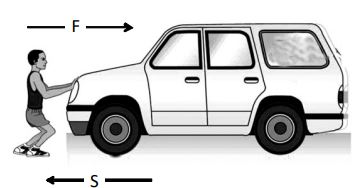 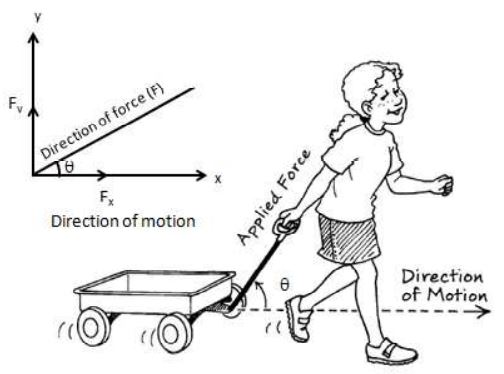 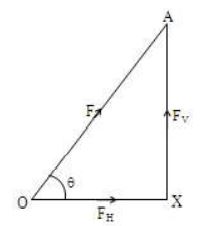 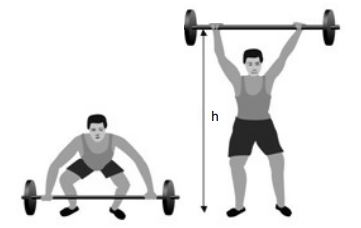 Suppose a body of mass ‘m’ is lifted vertically upwards through a distance ‘h’, then the force required to lift the body will be equal to the weight of the body, m × g, where ‘g’ is acceleration due to gravity.

Note:
When work is done against gravity ‘acceleration due to gravity’ is taken as ‘–g’. The magnitude of work is always positive.
Example: When a suitcase is lifted from the ground to some height, work is done against gravity.
4.5. SOME EXAMPLES OF ZERO WORK
1. Consider a person standing in front of a wall, trying to push it. He is unable to move it. Here, displacement of the wall is zero. Hence, no work is done by him.
2. A coolie standing with a heavy load on his head does no work, although he feels tired, as his displacement is zero.
3. Work done by the Sun to move the Earth:
In the case of the Earth revolving round the Sun, the direction of the force and the direction of displacement is as shown in the figure.

Observe that the angle 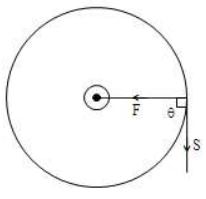 We know, when force makes an angle with displacement, work done is
W = FS Cos

Therefore, work done by the Sun to move the Earth is zero.
4. Work done by a porter in carrying a load
In the case of a porter carrying a load and moving, the direction of fore (weight of the load) and displacement are as shown in figure: 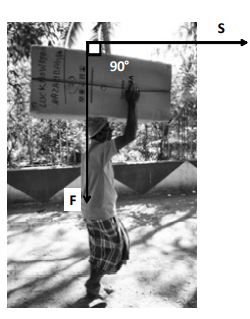 Observe that = 90°
We know that when force makes an angle with displacement, work done is

Therefore, work done by a porter in carrying the load, by moving horizontally, is zero.
From the above examples, we can conclude that.
The work is said to be zero
i) If the force alone acts and there is no displacement.
ii) If both force and displacement are perpendicular to each other

4.6. INTRODUCTION TO ENERGY
Have you ever heard the caption of “Boost” advertisement, the caption being ‘Boost is
the secret of energy”? This word ‘energy’ is very often used in our day-to-day life. For
instance, if a man does laborious work or if a child works energetically, we say that he
is full of energy. Much the similar way, in physics, too anything that has the ability to
do work is said to possess energy. 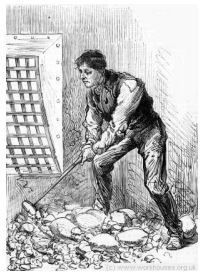 Definition: Energy can be defined as the capacity to do work.
Let us take an example, for our better understanding. A stone cutter raises his hammer
vertically above the stone and then hits it to break into small pieces. In doing so, he
does some work in raising the hammer. If the hammer is allowed to fall on the stone, it
can do work in breaking the stone.
Thus, the work done in raising the hammer has been stored up in it, giving it the ability
of doing work. Now, when the hammer is resting on the stone, it can no longer do any
work. Thus, we can say that the raised hammer has the energy or ability to do work. The amount of energy possessed by a body is equal to the amount of work it can do when its energy is released.

4.9. KINETIC ENERGY
Have you ever thrown a stone against a glass window? What happens if you do so?
As the stone hits the glass, it breaks into pieces. Why does glass break inot pieces? When you throw the stone, it sets into motion, acquiring some velocity. As a result, some energy is stored by the moving body (stone). This energy results in breaking of the window, when stone strikes it. Here, the body possesses energy as a result of its motion. This energy is called Kinetic energy.
Kinetic energy can be defined as energy possessed by an object by virtue of its motion.
Examples of Kinetic energy:
i) Energy possessed by a moving bicycle.   ii) Energy possessed by running water of a river.

Mathematical Expression for K.E.
Consider a boy of mass ‘m’ at rest. When a force is applied, it sets into motion and acquires a velocity after travelling a distance of ‘S’.

Force = ma, where ‘a’ is the acceleration of the body.
In this case, kinetic energy is measured by the amount of work done by the force to acquire the velocity.
K.E. = Force × Displacement = ma × S —– (1)

substituting the above value in (1), we get

Work – Energy Theorem
Let a body of mass ‘m’ move with a velocity u m/s. Let a force (F) act on it in the direction of motion. This increases the velocity of the body to ‘v’m/s.

Let the displacement of the body be ‘S’ m
Selection of the formula:

Let us now calculate the force acting one the body.
Force = mass × acceleration

Thus, we conclude that ‘work done on a moving body is equal to the change in its kinetic energy’. This is known as work energy theorem.
4.10. POTENTIAL ENERGY
Consider the following to understand potential energy:
Place a small black of wooden piece before a compressed spring. Release the spring and see what happens. Obviously, the block will be pushed to a certain distance.

Repeat the same exercise in case of spring with its natural length (i.e., non compressed spring). we observe that, there will be no change in the position of the block.

Mathematical Expression for potential energy
Consider a body of mass ‘m’ lifted to a height ‘h’, against gravity from a point A to a point B.
Force required to lift the body, ‘F’ = weight of the body

This work done is stored in the form of energy, called “Potential energy”

4.11. LAW OF CONSERVATION OF ENERGY
The energy can neither be created, nor can it be destroyed. It may be transformed from one form to another form, but the total energy of the system remains constant.
Furthermore, we may say that sum total of energy in this universe is a constant quantity. It cannot be created, nor can it be destroyed, no matter it can change its form, provided the universe is considered as single system.
Mathematical Explanation
Case 1: Consider a stone of mass ‘m’ held at a height ‘h’ from the ground level, such that ‘g’ is the acceleration due to gravity, as illustrated by the position A.
At position A:

Case 2: Consider the stone at point B, during its free fall, such that it falls through a
height ‘x’ and has a velocity v. 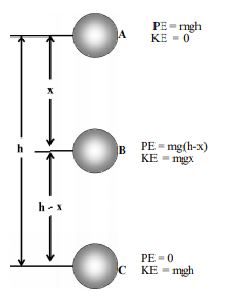 Case 3: Consider-the stone at point C, during its free fall, such that it reaches the surface of earth. Let v be its velocity.
Applying

4.12. INTRODUCTION TO POWER
The quantity of work has to be done with a force causing a displacement. Work has nothing
to do with the amount of time in which this force acts to cause the displacement. Sometimes,
the work is done very quickly and at other times the work is done rather slowly. For example, a rock climber takes an abnormally long time to elevate his body up a few meters along the side of a cliff. On the other hand, a trail hiker (who selects the easier path up the mountain) might elevate his body a few meters in a short time. The two people might do the same amount of work, yet the hiker does the work in considerably less time than the rock climber. The quantity which has to do with the rate at which a certain amount of work is done is known as the power. The hiker has a greater power rating, than the rock climber.
Power is defined as is the rate at which work is done.
4.13. MEASUREMENT OF POWER
The amount of power of a body depends upon.
i) The magnitude of the work and
ii) The time taken by the body.
So by knowing the work and time, we can measure the power. The amount of power is the ratio of work and time.

Horse power
The idea of horsepower persists as a legacy term in many languages, particularly in the automotive industry, for listing the maximum rate of power application of internal – combustion engines.
Horsepower is defined as work done over time. The exact definition of one horsepower is 33,000 1b.ft./minute. Put another way, if you were to lift 33,000 pounds one foot over a period of one minute, you would have been working at the rate of one horsepower.

4.15. DIFFERENT EXPRESSIONS TO CALCULATE THE MAGNITUDE OF POWER
1. Power to move a body
Consider a force ‘F’ acting on a body that is displaced in the direction of force by a distance ‘S’.

Then the power is given by the following expression:

2. Power to stop a moving body
Consider a force ‘F’ acting on a body against the direction of the motion of the body. The body is stopped in time ‘t’ after travelling through a distance ‘S’.

Then, the power used to stop the body can be obtained by the following expression.

Note: –ve sign indicates the power is used against the direction of motion of the body. 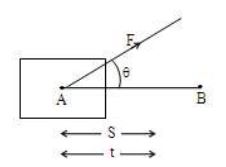 4. Power to lift a body against gravity
Consider a mass ‘m’ lifted from the surface to a height ‘h’ against gravity. If ‘t’ is the time taken to lift the body, then the power can be calculated by the following expression:

Was this article helpful to you? Yes 6 No 1